Garmin echoMAP CHIRP 53cv has an average rating of 4.4 out of 5 based on 12 user reviews.

Kayak fishing is increasingly popular. You can reach deep water but without the hassles of boat costs and maintenance. You can also fish shallow waters closer to shore than you can with a boat. Perhaps best of all, you aren’t going to scare the fish the way a running motor does. But you can still take full advantage of a modern fish finder. Here are three GPS units that go very well with kayak fishing. 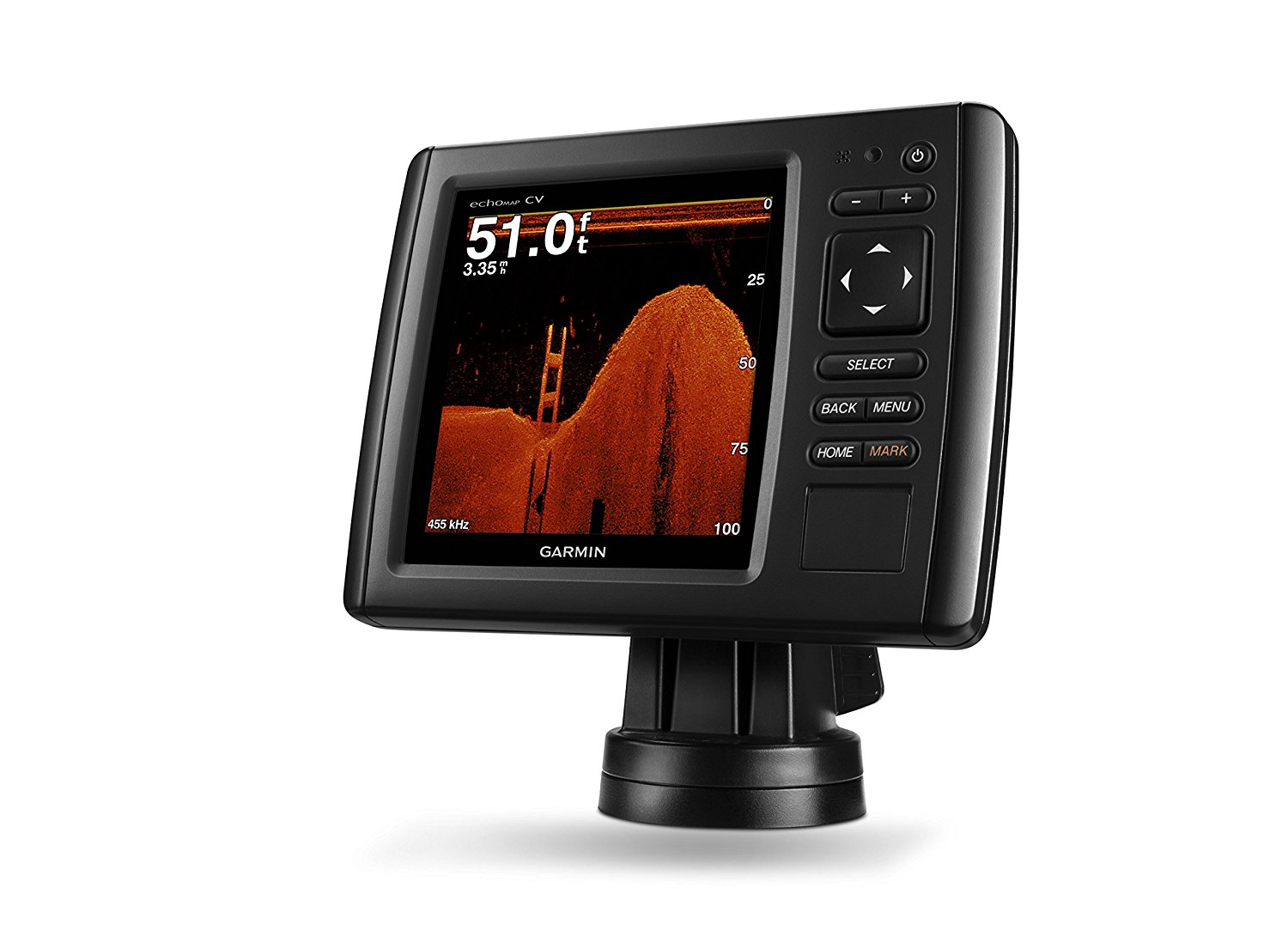 Garmin’s 53cv comes with the new QuickDraw Contours software that allows you to create your own toppgraphical maps of the bottom at an accuracy of 1′ intervals. The 53cv also includes echoMap’s U.S. LakeVu with high-def maps of 17,000 inland lakes, as well as a shallow water-shading function. The combination of CHIRP/ClearVu sonar provides clearer images at considerable depths.

The 53cv is a small 7x2x5 inches and weights only 1.3 pounds, so it won’t get in your way while paddling your kayak. A sleek design puts the 5″ color screen to the left and buttons to the right for one-handed operation.

The screen offers 480×480 pixel resolution in WQVGA colors, and is backlit for low-light operation. You’ll be able to see both fish and objects at near-photo quality. It offers user-friendly menus with split-screen depth and GPS views.

The 2D CHIRP sonar extends downward in a cone that broadens into 16 and 24-degree dual beams. The ClearVu sonar provides up to 50-degree side-to-side beams at 455 kHz and 30 degrees at 800 kHz. The 53cv uses both types of sonar simultaneously for a more detailed picture. The down imaging works quickly and accurately. There’s no Wi-Fi connectivity, either, but it does support VHF radio.

This unit can reach depths of 800 feet in 2D and 500 feet in ClearVu. The GT22HW-TM (4-pin) transducer operates at 500 watts of output for 2D CHIRP and 600 watts (RMS) in ClearVu. Covering a range of frequencies helps the unit form a picture with vibrant color and clearly separated fish images.

The 53cv comes with:

Sensitive GPS uses 5Hz signals that are updated 5 times per second. Built-in memory allows you to set up to 500 routes, 5,000 waypoints, and as many as 50,000 points in up to 50 separate saved tracks. No external GPS antenna is needed.

Although the Garmin 53cv is a good fish finder by any means, its exceptional mapping and sonar abilities and the compact base make it a great investment for the dedicated kayaker. 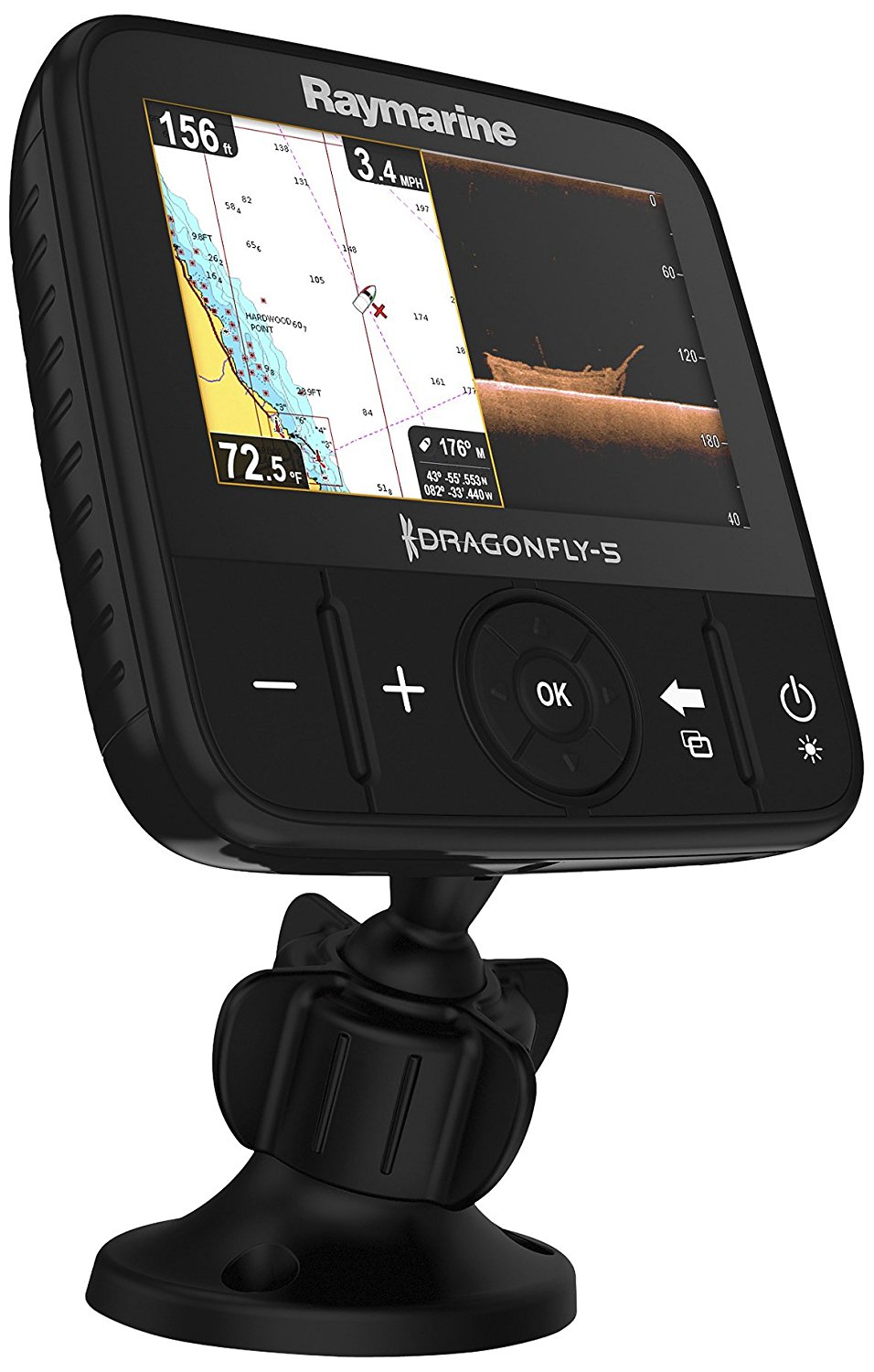 The Dragonfly 5 Pro includes all the latest technology, such as Navionics+ software and dual-channel sonar. It was originally designed for deep-sea use but is now redesigned for freshwater anglers, as well.

It is on the large side for a kayakers fish finder at about 14″ square and 3 pounds in weight. The removable mounting ball works with most aftermarket 1″ ball-and-socket mounts. Mounting thread, cable connector, and microSD slot are all at the back of the unit.

It features a 5″ glare-proof LCD display at 480×800 pixels with LED backlighting. The screen is optically bonded for sharper 16-bit TFT color, widened views, and to reduce fogging. The controls are arranged below the screen for quick thumb-touch access. It offers split-screen capability for showing depth and navigation views. The image quality is outstanding, but you can also customize the colors if you like. You also get a handy zoom feature at the touch of a button.

The Dragonfly 5 Pro uses wide-spectrum 350 kHz DownVision CHIRP for photo-quality imaging along with 200 kHz 2D CHIRP sonar for depth. The unit automatically selects which sonar to use based on speed, so for a kayaker you’ll most likely be using the DownVision sonar for crisp, colorful fish images. It’s very accurate to depths of 160 feet. The maximum depth for the 2D sonar is 600 feet. The transducer operates at a strong 500 watts (RMS).

It’s not compatible with Bluetooth, but is Wi-Fi enabled. The included Raymarine Wi-Fish app lets you stream data to your smartphone or tablet, and replay, save, or share it online. The 5 Pro includes an open microSD slot for expanded storage. There’s also waterline, transducer, and keel offsets so you can make minor adjustments to your view. Raymarine includes a simulator to help you master the fish finder quickly.

The Dragonfly 5 Pro comes with:

The GPS functions on over 50 channels for improved mapping precision. Internal storage allows you up to 15 tracks and 3,000 waypoints. The Navionics mapping includes thousands of lakes, streams, and coastlines across North America. You’ll have no lag whatsoever in GPS updates using the Dragonfly 5 Pro from a kayak, as it works well even with faster-moving boats. You can set ranges, alarms, and fish finder alerts as you like.

Dragonfly 5 Pro is simple to install and easy to use, even for beginners. While it doesn’t have the mapping capacity of the Garmin 53cv and is slightly more expensive, it has plenty of other great features, the most significant being the Wi-Fish app.
The data cable is too long for most kayaks. You’ll either have to loop it up or buy a shorter one. The user interface is also not so intuitive as other models, so you might want to download the manual at some point.

However, if you want a rugged fish finder that’s perfectly suited for kayakers, the range of features make the Dragonfly 5 PRO a great investment. 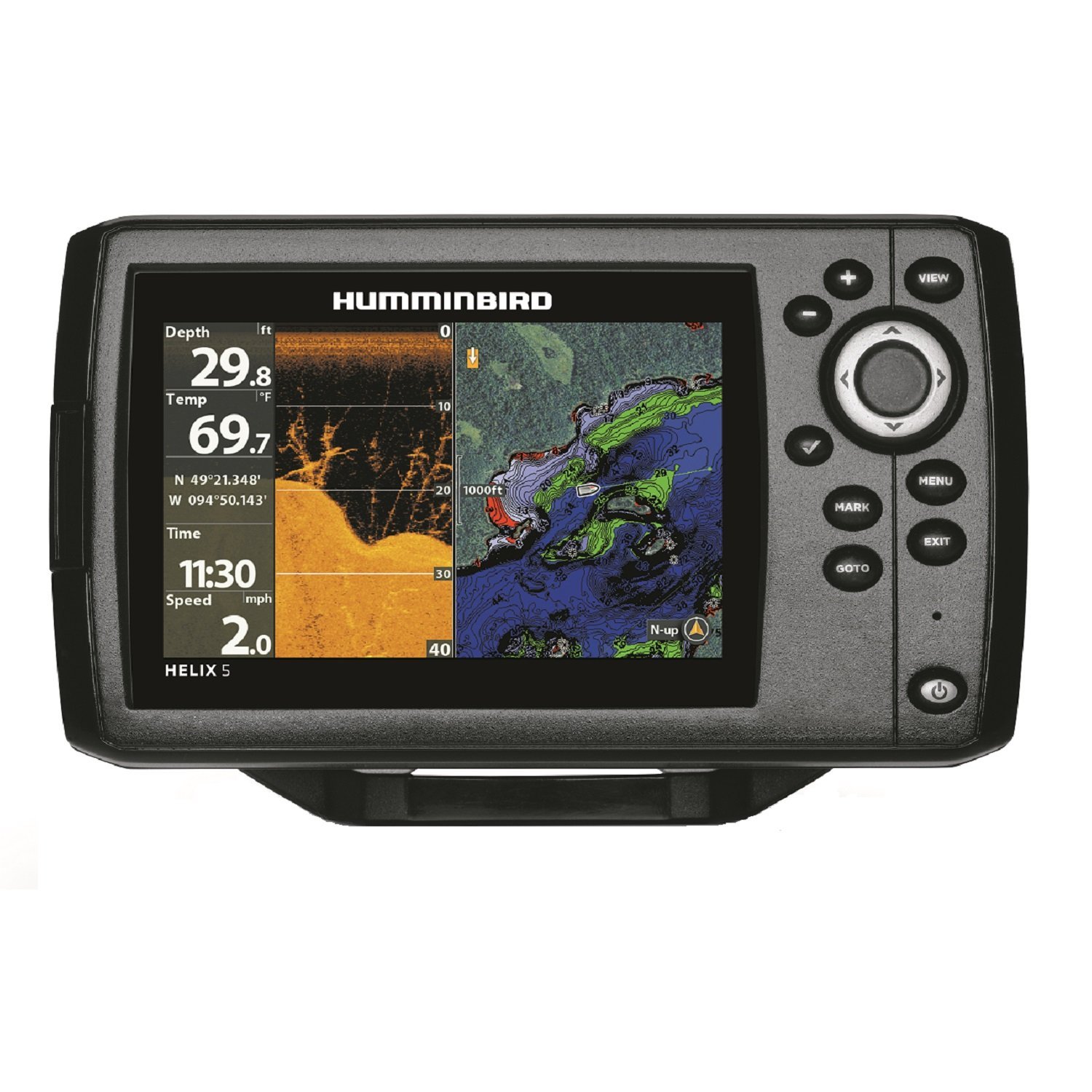 The Helix 5 is a high-performance fish finder at an affordable price. Humminbird’s UniMap technology and dual-beam sonar create some fast, clear displays of what’s beneath your kayak. It’s a rugged-looking unit with buttons grouped to the right for single-handed operation. The unit measures about 15x10x5 inches and weighs a little over 2 pounds.

The screen is capable of 1,500-nit brightness, more than most high-end TVs. At 800×480 resolution, it provides a detailed 16-bit color TFT display. You can add or remove display readouts such as bottom depth, water temperature, turbulence readings, and more, or display information in split-screen.

The Helix 5 provides CHIRP down imaging and Humminbird’s DualBeam PLUS sonar for high detail. The DI sonar uses 455/800 kHz frequencies in a dual 75/45 degree cone. The DualBeam PLUS sonar operates at 200/455 kHz and 16 to 28 degree angles. Altogether, you’re getting a triple frequency signal of 200/455/800 for crisp images in depths up to 600 feet.

The XNT 9 DI T tranducer outputs 500 watts (RMS) and has a built-in temperature sensor. You’ll get your best imaging at 1 to 6 mph, which is perfect for the kayak fisherman.

Humminbird’s SwitchFire technology allows you to instantly switch between Clear and Max modes on the fly. You can split-screen into distinct CHIRP and DualBeam Plus views. It will also show different lure presentations and even estimates of bottom hardness. You can download the full user manual online.

Although the Helix 5 works perfectly well in saltwater, though sonar depths are limited to 400 feet. It includes a Fish ID+ function and three different fish alarms for large, medium, or any fish at all. You’ll also get bottom lock, A-scope, and flasher functions. The fish finder is also compatible with a range of other sonar products if you decide to upgrade.

The Helix 5 comes with:

Precision GPS allows course plotting with a microSD card slot for expanding storage. You’ll receive mapping data on the entire U.S. coastline plus 10,000 inland lakes, automatically updated by LakeMaster and other sources free of charge. These maps include known obstacles, points-of-interest, sonar recording, display snapshots, bottom contours, and more. The included Navionics+ maps are first-rate on both vividness and detail.

You can use the included AutoChart Live software to create your own maps. You can plot up to 45 routes, 2,500 waypoints, and 50 tracks at up to 20,000 points per track.
Software updates can be on the slow side, and the menu options are more complex than some models. It would be nice to see a few extras, for instance a user manual and a protective cover. Still, considering all that it can do and it’s compatibility with other technologies, the Helix 5 a great value just as it is.