Review of Airmar 260 Family of Transducers

The Airmar 260 series is a 1-kW transducer available in a variety of configurations, including thru-hull, in-hull, and transom mount. The 260 is a beast whose size and performance dwarfs many of its more common and less expensive brethren like the Airmar P66.

The transducer is the heart of any fishfinder, so getting the right one can optimize your sounder performance. Airmar builds a wide range of transducer models for several marine electronics makers including Furuno, Garmin, Lowrance, and Raymarine. 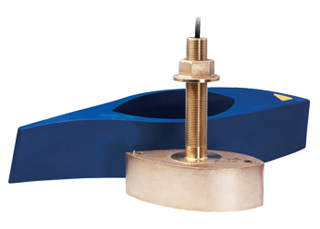 The Airmar B260, shown here, was the first version in this series. This is a bronze thru-hull unit with it’s optional fairing block shown alongside. This unit can also be flush mounted.

Usually, the difference between the same model transducer used by a different brand of fishfinder is the cable end that connects to the display unit.

However, that’s not always the case; some transducers do have internal differences depending on the marine electronics maker they are built for.

Airmar also makes and markets crossover cables that allow a transducer built initially with say a 10-pin Furuno cable end to connect to a Garmin MFD.

There are currently four versions of the Airmar 260 series transducer available, the B260, SS260, M260, and TM260. The original in the series, the Airmar B260, is a bronze thru-hull that you can mount in an Airmar fairing block or glassed-in flush to the bottom of your boat. Because this is a large recreational transducer determining the installation layout must be done on a case by case basis.

The B260 weighs in at a hefty 16 pounds with the transducer portion of the unit measuring 8.5-inch fore to aft, 4.5-inches wide, and slightly over 2.5-inches deep. Adding a fairing block to the unit increases the exposed dimensions significantly. A fairing block installation is over 22-inches fore to aft, and slightly over 5-inches wide and deep. Obviously, a large clean flat under hull surface is required for this installation. Deadrise can be up to 20 degrees. The Airmar SS260 is identical to the B260 in all aspect, except it is constructed with a stainless steel housing.

The Airmar M260 is a unique transducer. It uses a tank system that lets you mount the unit inside your boat’s hull without having to drill any holes in the bottom. 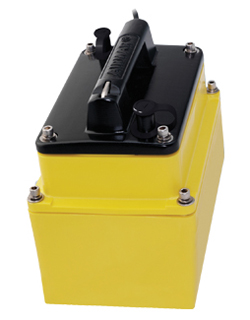 Airmar M260 Air bubbles and hull coring are both the enemy of a transducer sound signal so keep in mind this unit can only be mounted in an un-cored hull in an area of solid fiberglass.

The tank comes filled with non-toxic anti-freeze to prevent air bubbles between the transducer and the hull.

Without air bubbles, the transducer signal can pass through the liquid filled tank, the solid fiberglass hull, and on into the water.

You will need access to a pretty large area of your boat bottom to install the M260. The tank is just under 8-inches fore to aft, 6-inches wide, and just over 8-inches tall.

Adapting the tank to the deadrise of your hull will reduce the height somewhat. Up to 30 degrees of deadrise can be accommodated. You can mount the M260 on either a fore/aft axis or on a port/starboard axis depending on the needs of the particular installation in your vessel. This transducer has become increasingly popular with the large fast center console crowd.

The latest addition to the Airmar 260 transducer fleet is the TM260. This unit brings the 260’s power and sensitivity to the small boater via its transom mount to those who just don’t have the space to mount any other version of the Airmar 260. 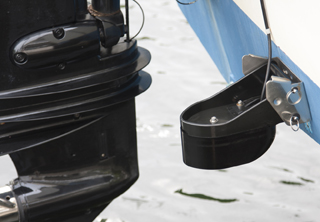 Here is the Airmar TM260 installed on the transom of our 20-foot Seacraft test boat. Now don’t get me wrong, this is still a large transducer by any measure. The transducer puck is 7.5-inches fore to aft, slightly over 4-inches wide, and almost 3-inches high. These dimensions dwarf any 500- or 600-watt transducer I have ever seen or installed. At nearly 9-pounds this thing is very heavy too. The package ships will a heavy duty stainless steel transom mount that looks similar to other transom mount setups I have installed, just a lot bigger and stronger.

I have the Airmar TM260 mounted on the transom of a 20-foot Seacraft and coupled to a Garmin 740s MFD. This combination has proved to be very successful. My previous test boat fishfinder installation coupled a Garmin 5208 to an Airmar B44V originally cabled with a 10-pin Furuno end. I used an Airmar crossover cable to make the connection to the big screen Garmin. So far I have to say the newer setup with the Airmar 260 series transducer is hands down superior, as I expected it to be.

Installation of the TM260 on the Seacraft was straightforward. I mounted the stainless steel bracket to the transom with four of the five bolts, and then I installed the transducer and took the vessel for a test run. Initially, everything worked just fine except the bottom lock would cut out at speed. To fix this issue I lowered the transducer about an eighth of an inch and then locked it in place by installing the center mount fifth bolt.

I did have to cut the transducer cable to snake it through to the console where the Garmin 740s was mounted. I followed the Airmar recommendation to use the Airmar splash-proof junction box to reconnect the wires inside the cable and mounted the junction box inside the console. Everything worked perfectly upon completion.

Why choose an Airmar 260 over other less expensive options? In a word, performance.

Shop for an Airmar 1-kW transducer to fit your fishfinder here.