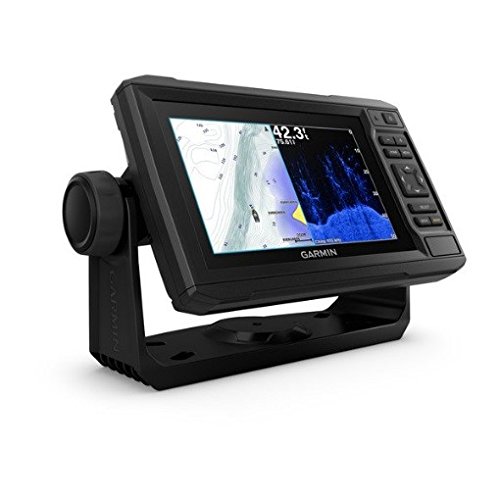 For 2018, Garmin introduced the Echomap Plus 63cv, which is among the latest series of fishfinders offering updated technology. The 63cv replaces the echoMAP CHIRP 53cv. The upgrades include larger, higher resolution screen, ActiveCaptain compatibility, LakeVu charts and Wi-Fi.

The package contains the EchoMap fishfinder, one CV20-TM transducer, the power and data cable, the tilt and swivel mount, a flush mount, a protective cover, installation hardware and the instruction manual.

The EchoMap Plus 63cv features a 6.2-inch display equipped with full-color WVGA and 800×400 pixel resolution. Adjustable backlighting ensures the images are easy to see even in direct sunlight. The unit is also rated as having IPX7 waterproofing, which prevents damage in the event of accidental water exposure. The mounts provided enable anglers to install the unit into a vessel’s dashboard or use the quick-release swivel mount, which makes the EchoMap portable or easy to keep secure when not in use. The device enables users to navigate through the menus using the same push buttons featured on the right side of the unit. Unlike larger units, the 63cv does not come with touchscreen functionality.

Thanks to the Wi-Fi capability, anglers can easily link the device with a laptop, smartphone or tablet. Additionally, the unit features a microSD card slot for inserting cards having up to 32 GB of storage.

The CV20-TM transducer comes equipped with an integrated temperature sensor, a 20-foot cable and a four-pin connector. The single transducer produces the images for both the 2D and the ClearVu sonar. The dual-frequency transducer also enables anglers to use both frequency beams simultaneously when desired.

The 2D Chirp sonar emits signals in a conical beam of 45 degrees on the 77 kHz frequency. The 200 kHz frequency has a conical beam of 15 degrees. The traditional sonar functions at depths of up to 2,300 feet in freshwater and 1,100 feet in saltwater. The 2D sonar provides the traditional arc images of target fish on a multi-colored screen along with a rough outline of underwater structures and vegetation.

ClearVu operates on either 455 kHz or on 800 kHz frequency and functions at depths of up to 250 feet. The ClearVu function emits a fan-shaped beam that spans a mere 1.5 degrees fore and aft. However, on the 455 kHz frequency, the beam spans 53 degrees from side-to-side. On the 800 kHz frequency, the beam is 29 degrees from side-to-side. ClearVu creates crisp monochromatic images that enable anglers to differentiate between fish, vegetation and natural or manmade structures.

The unique transducer also enables Chirp and ClearVu to function on middle and high band frequencies. The bands for Chirp span 50 to 83 kHz and rises from 200 up to 260 kHz. For ClearVu, the frequency ranges are 435 to 475 kHz and rises from 800 to 840 kHz.

Typically, the sonar provides the highest image quality when trolling at speeds of up to 12 mph. However, the Ultrascroll function enables the sonar to create images at higher vessel speeds.

The Echomap Plus 63cv also has the modes and sonar features provided in previous fishfinding models. These functions include A-Scope, Bottom Lock, Depth Alarm, Fish Alarm, Fish Symbols, Flasher and Split-Zoom along with Sonar History Rewind and Sonar Recording capabilities.

The Garmin EchoMap comes equipped with a 5 Hz GPS, which monitors and updates a vessel’s location smoothly five times each second. The accuracy of the GPS thus enables anglers to view coordinates of specific waypoints, the coordinates of a particular point of interest or the coordinates of the boat’s current location. The GPS additionally has the ability to calculate boat speed.

Each Garmin unit comes with enough internal storage to save up to 100 routes and 5,000 waypoints. The trail recording function saves up to 50 tracks and 50,000 track points. The 63cv also has the ability to convert tracks into routes, enables waypoints additions to routes and retraces routes.

The LakeVu charts encompass the inland waters of the United States. The software includes the charts of more than 17,000 lakes and one-foot contours of more than 13,000 lakes. For greater image clarity, the charts also allow depth range and shallow shading. The Quickdraw Contours function combines the information provided by the GPS and the sonar to draw depth contours on the map of a current location. Whether or not anglers update the fishfinder’s charts, the function still allows current contour drawings. Anglers have the option of upgrade navigation ability of the unit, as the Garmin EchoMap is compatible with BlueChart g2 Vision and LakeVu HD Ultra charts.

The cost-free mobile app known as ActiveCaptain enables mariners to manage their time on the water from virtually any destination. Using Wi-Fi, users simply link the Garmin EchoMap with a mobile device containing the app to access OneChart. In this way, Garmin owners are able to purchase charts online, acquire updates and access the Quickdraw Contours Community to get notifications. The unit also supports AIS and DSC-capable VHF radio.

SailAssist aids sailing enthusiasts by providing course-over-ground lines, enhanced wind rose, headings and lay lines. The feature helps gain the advantage of wind-maximizing, which provides the possibility to see apparent and true wind angle and speed. The pre-race guidance page displays the virtual starting line along the lay line data field in addition to the burn before starting the race and a race timer.

Overall, the Garmin EchoMap Plus 63cv is an outstanding unit for fishing and general navigation purposes whether on freshwater inland bodies or saltwater destinations offshore. The versatility and features of the fishfinder provide mariners with exceptional value at an affordable price.