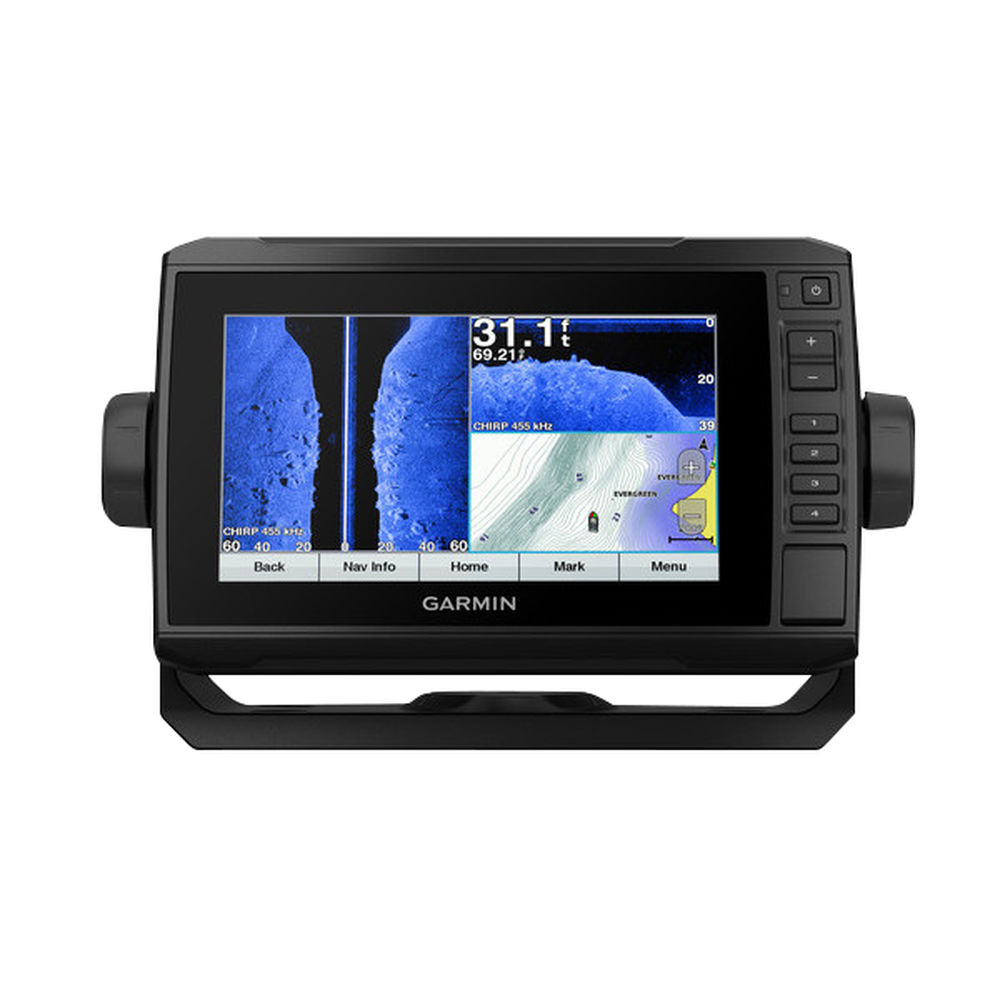 While effective sonar-based fish finders have existed for more than 30 years, recent technological advancements have meant that capabilities once reserved for naval warfare applications are now available to everyday fishermen. Commercially available live-updating sonar as well as units with high-resolution side and forward views have been available for well over a decade. But these game-changing technologies were previously only available in top-end packages that cost thousands of dollars and were, therefore, out of reach of the average sport fisherman.

With its EchoMap line of products, Garmin is now putting these advanced fish-finding capabilities in the hands of ordinary fishermen. The EchoMap Plus 73sv is a multifunction fish finder, chart plotter and navigation tool that is specifically designed for freshwater lake fishing throughout the United States and Canada. With detailed maps of more than 17,000 inland lakes and a large Quickdraw community that adds ultra-detailed lake maps every day, the Echomap Plus 73sv is the most advanced multipurpose fish-finding tool that has ever been available for under $1,000.

Traditional two-frequency sonar worked for finding fish. But it didn’t provide much in the way of clarity or the ability to distinguish between baitfish and gamefish. The water column that older sonar surveyed tended to be narrow, and detailed views of a lake’s structures, bottom and surrounding contours were all but nonexistent.

Garmin’s next-generation CHIRP sonar, which stands for Compressed High-Intensity Radiated Pulse, uses a combination of sophisticated computer algorithms and a continuous-sweep broadband scanning transducer to create the most detailed commercially available sonar images on the water.

CHIRP is effectively a military-grade technology that has been made available to the public. And the difference is mind-blowing. CHIRP-based SideVu and ClearVu systems provide photograph-like images of both side and forward views. So accurate are the images produced by this ultra-high-resolution sonar system that it is often possible not only to tell the difference between baitfish and gamefish at a glance, but expert fisherman are frequently able to identify the specific fish species at depths of up to 200 feet.

With Garmin’s SideVu system, anglers get a fast-updating image of both the water column and the bottom’s surface contours and density at distances of up to 200 feet on each side of the boat. The EchoMap Plus 73sv is also compatible with Garmin’s camera-like Panoptix and Livescope transducers. These allow for the real-time viewing of fish and bait as if through a high-definition camera.

The CHIRP system dramatically improves imaging in all water conditions and depths. But it is in the shallow freshwater lake environment where the system really flexes its muscle. There, the system can easily be run in its High CHIRP setting, utilizing the upper range of its frequency spectrum and offering an unbelievable improvement in resolution over older systems.

All told, CHIRP technology, in all its incarnations, is a game-changing system that allows anglers to not only find fish but also to distinguish between species, quickly see which baits work and which don’t and to survey lake structures, bottom surfaces and areas where fish congregate in a way that has never before been possible.

LakeVu gives you detailed charts of nearly every lake in the U.S. and Canada

With more than 17,000 detailed charts, many with contours as fine as 1 foot, Garmin’s LakeVu is the most comprehensive inland-lake charting system on the market. With LakeVu, you can see lake floor views at a level of detail that is unsurpassed. And the EchoMap Plus 73sv allows for custom waypoint creation, helping you to find fish-rich locations and then allowing for easy navigation back to those same spots on future outings. All this is accomplished through Garmin’s Auto Guidance system, which gives the fastest and safest routes to any given waypoint in a lake, taking into account your boat’s draft and any obstructions below the water line.

LakeVu also allows for user-defined depth shading, helping fishermen pinpoint locations on the lake that meet their target-depth requirements. Likewise, LakeVu has user-defined shallow-water shading capability, helping you to navigate around any hazardous regions of the lake.

It should be noted that the EchoMap Plus 73sv is primarily aimed at inland lake fishing and navigation and is not designed for use on the open seas. There are other EchoMap products, such as the CV23M, that are geared towards saltwater applications.

Bright, high-resolution display gives the clearest images on the water

The EchoMap Plus 73sv gives what quite simply amount to the best images you’ll find on any commercially available sonar system. Those who are accustomed to older two-frequency sonar systems are able to give users an idea of where fish are and how deep the water is. But they are capable of little else.

Through its CHIRP-based ClearVu and SideVu sonar modes, the EchoMap Plus 73sv gives breathtaking clarity of images, allowing users to easily distinguish between soft and rock lake beds, natural versus manmade objects and, in many cases, to easily identify objects, such as sunken boats or other man-made debris. The ability of ClearVu users to distinguish not only the size but also the individual species of fish on the screen is a product of the incredible resolution with which the EchoMap Plus captures its images, often leading to the ability to discern individual fins on a fish’s body.

One thing to note is that the Garmin CHIRP system tends to provide far better resolution for discerning structures, such as plants, lakebed or man-made objects, while in the ClearVu mode. It tends to deliver much better visual information on fish in its traditional sonar mode.

EchoMap Plus products have split-screen functionality, allowing for SideVu, ClearVu and traditional sonar modes to be viewed simultaneously. Together, these viewing modes provide truly formidable information that allows fisherman to quickly and easily locate precisely the target conditions and class of fish that they are searching for.

Increasingly, the EchoMap Plus 73sv is creating two categories of anglers: those who have it and those who are at a serious disadvantage.

The Quickdraw Contours feature allows for custom mapping of any body of water, allowing the custom charts to be saved and, if desired, shared. With a massive community of fisherman across North America, the Quickdraw community publishes more ultra-detailed maps by the day. The chances are good that your local public-access and other lakes will already be charted with up to 1-foot contour accuracy.

In addition to the Quickdraw community, the EchoMap Plus 73sv comes with Garmin’s ActiveCaptain app preinstalled. ActiveCaptain provides the ultimate in fishing and navigation connectivity, allowing for easy interfacing with other devices through a wi-fi connection.

But the real power of ActiveCaptain is its tens of thousands of community members, whose interactions help boaters across the country stay abreast of up-to-the-minute conditions, including weather, water conditions and even the status of a given lake’s fish.

Ultimately, you may be wondering why you should shell out hundreds of dollars for a standalone fish finder. The answer lies in the fact that the Garmin EchoMap Plus 73sv’s photo-like sonar rendering and its tremendous processing power combine to offer an unsurpassably crystal-clear picture of what’s going on beneath the surface of your favorite lake.

For serious fishermen and hobbyists alike, there simply isn’t a better fish finder.