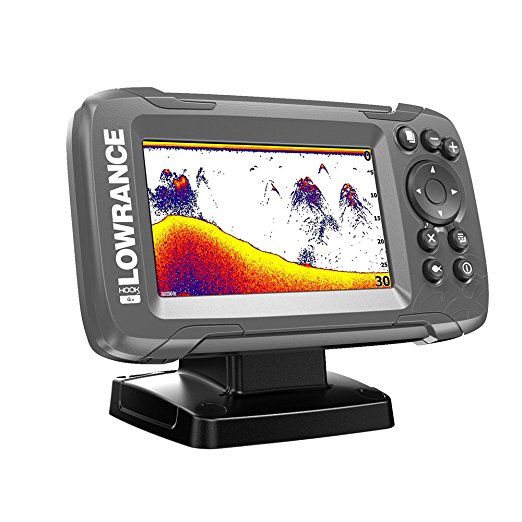 While not the flagship model of the brand, the Lowrance Hook2 4X is definitely an intriguing fishfinder that offers plenty of value at an incredibly reasonable price point. That said, with increasingly stiff competition coming from Garmin, Helix, and Humminbird, Lowrance certainly has its work cut out for it to remain relevant in an increasingly crowded and competitive market.

The Lowrance Hook2 4X is actually the lowest end of Lowrance’s revitalized Hook2 series. That said, it still provides a surprising amount of value for most of your basic needs, though it is definitely more suited for certain types of fishing. For instance, it is not necessarily going to blow you away with loads of bells and whistles–that’s what the Hook2 X12 is for–but it will provide a reliable experience in low-lying freshwater with the ability to handle some deeper lakes as well.
One thing to keep in mind is that the Lowrance Hook2 4X actually comes in 2 different models: one with a GPS antenna and one without. While this will not affect the Hook2 4X’s ability to detect the fish in any way, it will either provide additional course tracking options or not. Considering the difference between the two models generally ranges about $20 and both models cost under $150, there is little reason not to opt for the Lowrance Hook2 4X with the GPS antenna.

When it comes to judging fishfinders, the single most important factor is how well it detects the fish. While this may seem a somewhat simple consideration, there are actually a whole host of features and qualities that ultimately influence and determine a given fishfinder’s ability to actually detect fish. In this regard, the Lowrance Hook2 4X performs admirably for its price point, though the transducer may leave a bit to be desired for more serious fisherman.

This quality is definitely a bit of a mixed bag. On the one hand, the Hook2 4X does offer a wide-angle sonar beam. On the other hand, this fishfinder only provides a single beam. What this means is that you will likely not miss detecting a fish within a wide range of area, but neither will you be provided with exceptionally detailed information when directly above the fish either.

This is definitely one of the areas where the Lowrance shines. Along with Garmin, Lowrance has been one of the companies instrumental in making the CHIRP sonar technology become nearly a must have for most worthwhile fishfinders. While higher-end models will certainly want to be able to isolate frequency channels for specific settings, even they too will often include a CHIRP sonar system as a general approach alongside whatever specialized systems they include.
The reason for this popularity is that the CHIRP sonar does not actually use a single frequency and instead sends out a range of frequencies in ascending order. The most common frequencies to be included in a CHIRP sonar are 50, 83, 192, and 200 kHz. What this does is allow the sonar to provide varying levels of range and detail which are then collated by the fishfinder’s software to present the most accurate representation that it can.
While the Lowrance Hook2 4X does come equipped with a CHIRP, it does not necessarily have a way to alter the frequency settings. This means that you will ultimately have to rely on a collated image–which is fine for most uses but may present a less than desired result for professional purposes. Of course, at under $150, this is definitely meant to be more of a high-end, consumer-grade fishfinder in the first place.

This is one of the areas where the Lowrance may be phoning it in as well as providing some potentially overstated advertising. Specifically, the Lowrance only uses 200 RMS watts. While this is technically acceptable, it is definitely a bit on the lower end of the spectrum and will have far more importance depending on the frequency of the sonar.
Since the Lowrance uses a wide-range CHIRP sonar detector, it is important to break down how the RMS wattage will translate to different frequencies and the true depths each frequency will be able to reach at that power level. For instance, at 200 watts, the Lowrance can provide a 50 Hz signal image of up to 800’. However, at 200 kHz, the Lowrance can only display an image that is 200’ deep at 200 watts of power–which is potentially where the advertisement of 500’ range comes from.

The Lowrance Hook2 4X display may not be pushing the limits of fishfinder displays, but it definitely checks all of the boxes. At 4”, this display is comparable with many high-end fishfinders–though it is by no means one of the larger displays available. Still, this display does come with SolarMAX technology which is especially useful during extremely bright days on the water.
Essentially, the display will adjust its brightness settings depending on how much light is being shone on it. On top of that, this also allows the display to provide a wide range of viewing angles, so you do not have to stand directly over top of the display in order to see it. In fact, all angles except for the bottom are visible at 70 degrees, while the bottom still offers an acceptable 50-degree viewing angle. If you are a night fisher, the Hook2 4X also comes with a backlight that is bright enough for you to see but not so bright that it can be seen by the fish.

Arguably one of the key points of the Hook2 4X is its focus on making itself easy to use. Whereas many fishfinders might offer a litany of additional features, they are often buried under headings and subheadings within the menu that require a herculean effort of patience to navigate. In order to allow you to spend your time fishing instead of fiddling with your fishfinder, the Hook2 4X streamlined many of its functions.

One of the biggest qualities about the Hook2 4X that makes it so easy to use is the simple menu layouts. All of the options are large and distinct from one another, so you do not have to worry about searching for the setting you wish to change. On top of an excellent user interface, many of the primary functions that fisherman must constantly adjust are accessible by a single button.

Of course, not all things on a more budget-friendly friendly can be cutting-edge. In this instance, the Hook2 4X still relies on a keypad interface rather than the more convenient touchscreen option seen on many of the higher-end fishfinders. That said, the aforementioned quick-switch setting buttons are all easily accessible and labeled.
If you do feel the need to go into the settings on a deeper level, the trackpad navigation system makes selecting the different option much easier with a single hand, so you can keep the other on your rod. Finally, all of the buttons provide a nice solid feel without feeling stiff or squishy.

Another convenience of the Lowrance Hook2 4X is its versatile mounting options. The bullet skimmer offers both front dash gimbal as well as quick-release bracket mounts. This means that regardless of where your boat best positions a fishfinder, the Hook2 4X is more than capable of accommodating it. Even better, this fishfinder is compatible with a wide variety of transom and trolling motor accessories, so you do not have to worry about purchasing entirely new equipment–assuming your mounts are not ancient as is.

While professional fisherman may prefer to plunk hundreds of dollars more for a fishfinder that provides a bevy of additional features–of which the Lowrance Hook2 series provides plenty of offerings–the Hook2 4X is still a worthy addition to the average fisherman simply looking to take his boat out on the water for a relaxing day.
With a solid CHIRP sonar, the only potential issue with the Hook2 4X is its slightly underpowered transducer which only puts out 200 RMS watts. That said, for the wide majority of fishing situations, the Hook2 4X should provide more than enough detection capability. When you combine that with an exceptional display at this price point and easy to control and navigate menus, this fishfinder is easily as good or better than many that cost $100 more.