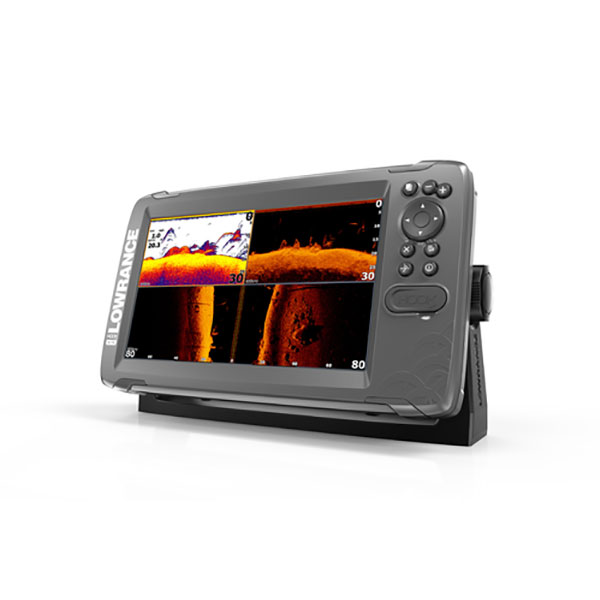 As of December 2017, Lowrance introduced the Hook2 9 with TripleShot Transducer fishfinder. The upgraded device makes it easier for anglers to use by implementing a more basic menu. The Hook 2 also features more sonar options usually only available on fishfinders costing significantly more. In this way, amateur or professional anglers enjoy the benefits of a fishfinder that increases the chances of having a good day out on the water.

The Hook2 9 boasts a nine-inch diagonal widescreen equipped with 800 x 400-pixel display. The SolarMax LED backlight ensures that you get crisp images regardless of sunlight conditions. The larger screen also makes images easier to see regardless of where you are position in the boat. The updated keyboard design offers one-touch access to the device’s various options quickly without having to navigate an extensive menu database. Nevertheless, the new Lowrance still enables you to use split-screen options to view sonar and maps simultaneously.

The entire unit has an IPX7 waterproof rating, which protects your fishfinder from damage should the unit be exposed to the water or rain. The mounts included with the Hook2 enable you to install the device directly into the dashboard. Alternatively, use the gimbal mount to easily remove the device for safekeeping when you are not fishing.

Unfortunately, the Hook2 9 is not equipped with an Ethernet port of NMEA networking. However, there is a micro SD card slot on the right side of the device, which enables you to upgrade software, add charts or transfer your data as desired.

Sonar autotuning is one of the features included in the plug-and-play Hook2 that makes the device easier to use. Instead of having to fine tune the sonar signal, the device continually monitors underwater conditions and make adjustments without you having to do a thing. In this way, you spend more time fishing.

The TripleShot gives you wide-angled, broadband high CHIRP sonar along with DownScan Imaging and SideScan capabilities. The sonar reception includes a temperature sensor. The unit comes with a transom mount, a 20-foot (6 meters) cable and an eight-pin connector. The upgrade features a longer, thinner connector than is provided with previous fishfinding models. The new design enables you to pass the device easier through the holes created in the boat’s hull. The connection is also guaranteed to be tight and waterproof.

The broadband high CHIRP sonar provides two-dimensional images of typical arch formation in full color. However, the signal does not function using a dual band. Instead, the transmission is high and wide. In CHIRP mode, the sonar functions at 200 kHz in depths of up to 500 feet (153 meters) in fresh or salt water.

DownScan transmits at 455 and 800 kHz and functions at depths of up to 300 feet (91 meters). The monochromatic images broadcasted from either side of your vessel are of photographic quality and appear as if you were looking down into the water from side to side. In this mode, you see underwater features that may include vegetation, changes in terrain depth and manmade features along with varied types of fish.

SideScan also transmits at 455 or 800 kHz. The photograph-quality images are similar to what a diver might see if below the waterline and looking outward. Side scanning mode enables you to see what lies from waterline to the bottom of the body of a lake or river. The crisp images enable you to differentiate between types of vegetation, brush, bait and game fish along with any manmade obstructions.

When using the Downscan or the SideScan modes, at 455 kHz, the signal functions at an optimal range and depth. However, the resolution is much lower. On the other hand, operating at 800 kHz, you get the highest resolution possible. But, there is less range coverage. In SideScan the coverage range is 300 feet on either side of the vessel. However, at 800 kHz, the range is reduced to 100 feet on either side.

Anglers also have the option of using Overlay DownScan and sonar recording. This function enables you to split the screen to include both DownScan and two-dimensional broadband sonar images to get a higher degree of differentiation between the fish arches and underlying vegetation. You also have the option of recording and rewinding the sonar log as needed. The log is easily stored on the unit’s internal memory or on a removable micro SD card. Other sonar amenities include an amplitude scope, fish ID, bottom lock, colorline, flasher and surface clarity.

Unfortunately, you do not have the option of networking via an external GPS device. However, the Lowrance Hook2 9 with TripleShot does have internal WAAS/EGNOS/MSAS capabilities. The internal software allows you to save routes, waypoints and tracks so you can return to your favorite spots time and again. The internal software also includes U.S. Inland Maps, which provides one-foot contours of more than 3,000 inland lakes.

The advanced technology of the Lowrance Hook2-9 TripleShot fishfinder enables you to choose from three types of sonar by simply using a single transducer. The device is perfect for inland fishing. The Hook2 is compatible with C-MAP®, C-MAP Genesis, Navionics® and other options should you decide to use the unit for off-shore fishing. Best of all, the new fishfinder is available for hundreds of dollars less than comparable models offering the same features.

I just bought the Hook2 9in triple shot.
Went out on the water 5 times and the transducer broke from the bracket.
I didn’t hit anything. Just drove and when I got to a point to fish, the screen wasn’t showing anything.

I notice It’s is made out of a thin plastic so there is No robustness.