Humminbird Helix 5 CHIRP G2 has an average rating of 4.78 out of 5 based on 9 user reviews. 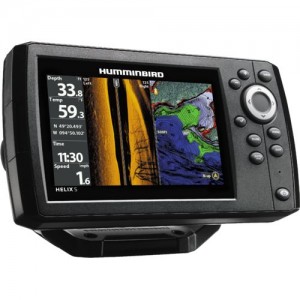 For 2017, Humminbird has once again stepped up the technology by creating the Helix 5 CHIRP G2 fish finder. Unlike the 1st Generation series, Gen 2 features the addition of CHIRP sonar, which enables anglers to scan depths using low, middle or high frequencies individually or simultaneously. The advanced sonar provides better target separation, reduced image noise and displays in higher-resolution along with the ability to reach depths of up to 1000 feet.

Anglers need merely dial the specific kHz in order to define the search range desired. Quickly access low, medium or high frequency ranges to find the species of fish that you hope to catch. The CHIRP also increases the ability to differentiate between bait fish, game fish, drop-offs, wrecks and other debris lying deep below the water’s surface. If the sonar beam encounters a group of fish, the display identifies each fish as an arch or dot and not one large dot.

The CHIRP sonar includes a transom mounted XNT 9 SI 180 T transducer and a 20-foot cable, which functions with fish finders having DI, SI or sonar capabilities. There is also an integrated water temperature probe that tells anglers the temperature at the upper most water layer. While normal 2D sonar functions at dual frequencies of 83/200 kHz, CHIRP extends the range to 75-95 hHz and 175-255 kHz. While down-imaging and side-imaging typically scan at a 455 kHz frequency, CHIRP increases the range to 420-520 kHz.

To use all three ranges at once, angles must have two CHIRP transducers plus two SM3000 black boxes. Range descriptions are as follows:

The Helix 5 Generation 2 CHIRP family includes five different models of fish finders. Each comes equipped with different features to accommodate a wide range of anglers and boaters. All models have the 5-inch 800 x 480 pixel display, gimbal or in-dash mounts. All of the Helix 5 devices are easily upgraded to include the map features you need. The Helix 5 CHIRP GPS G2, the Helix 5 CHIRP DI GPS G2 and the Helix 5 CHIRP SI GPS G2 are all equipped with GPS technology that includes a Micro SD card slot for use with cartography, saving screenshots, recording sonar readings or storing 25,000 waypoints, 45 routes and 50 tracks.

The GPS-equipped models come with AutoChart Live, which provides the ability to map depth using eight hours of storage space. All models are also compatible with the Humminbird LakeMaster charts, Gold/HotMaps and Navionics. The optional Smart Strike software gives anglers the advantage on fishing spots by identifying hot locations based on fish species, day of the year, season and current weather conditions.

The Helix 5 CHIRP Gen2 also comes with fish ID. While in 2D function, the technology replaces the familiar fish arches with fish symbols displayed above each fish. The color of the symbol also tells anglers which beam detected the fish. Fish found on the 200 kHz beam have orange symbols while fish found on the 83 kHz beam show up in green symbols. Anglers also have the option of purchasing a fish alarm that has three settings for medium, medium-large or large fish.

Despite all the bells and whistles that come with the new Helix 5 CHIRP, the units remain affordable. The ever-increasing innovations introduced by Humminbird give anglers yet another leg up on catching instead of finding the cache for the day. You can get a great deal on Humminbird Helix 5 CHIRP G2 here.

I bought this in the winter and when I played with it at home I found a setting for ice fishing. I decided to give it a try on ice since I couldn’t install it on the boat yet. I put the transducer in the hole so that floated just below the surface and switched to the 455kHz frequency, worked like a charm. I can’t wait to use it on the boat. Will probably buy an ice fishing transducer so that I can use it year-round.

I picked up this little jewel and the first thing I did was start working with it without reading the instructions. Big mistake folks. For ease of set up, and function is to read everything before downloading the software. Once the support team walked me through getting by that issue. All I can say is NICE PRODUCT. easy to navigate, crystal clear monitor, split screen, light weight, with a sleek design and look. I have to pick up a 10′ transducer extension cord for it, because I want to use this to replace my old faith Eagle FishElite 480

I would recommend others pick this unit up. For the price you will not be disappointed.

At first I was a little leery of this unit because it was one of the lowest priced side and down scan units on the market, and it only came with a five inch display. Once I got out on the water though I was thoroughly impressed. The wide aspect ratio makes the 5 inch screen seem much larger and it displayed everything in great detail. The preloaded maps and GPS feature are great for getting from spot to spot quickly, and for even better info you can purchase their hotspot maps upgrade. With the more detailed maps you will be able to navigate to the best spots on most any major body of water like a local, even if it is your first time. I can’t say enough about the crisp display and the added usefulness of having both down and side imaging sonar. For those who haven’t tried side scan yet, you are missing out. It gives you a much better picture fo the area than you get from down imaging alone. I recommend this unit to anyone who wants to spend less time looking for fish and more time reeling them in. For the price and performance there is really nothing on the market that can compete.

I am a complete novice when it comes to fish finders and sonar, so I wasn’t sure what to expect. The Helix 5 DI has thoroughly impressed me. Given my limited knowledge and experience, I wasn’t sure how useful it would be, but after a couple of trips to the lake I have managed to find some nice offshore fishing spots. I can even tell the difference in active fish and neutral ones. I really can’t praise Humminbird enough for how easy it is to learn to use their product. Now as soon as I get the extra cash in hand I plan on purchasing the Helix 5 Si chartplotter combo. If you haven’t given one of the Helix units a try, you definitely should.

I installed this one on my pontoon and after 6 times on the water, I am confident I made the right choice. The down imaging is on another level from older regular sonars. Now I can see detail on bottom structures and drop-offs where my old units would only show a blob. I like to catfish, so having this kind of intel on what is down there is invaluable. It operates smoothly even when the boat is under way and never seems to skip like some I have owned in the past did. Keep in mind that if you turn it when not in the water you have to use simulation mode or it can screw up the calibration. This thing was worth every penny and then some. Humminbird has another happy customer.

I got this one because I have never had a side scan sonar and wanted to give it a try. I had my doubts about the 5” screen being large enough to give any detail in split mode. One trip to the lake and I am now a believer. The wide landscape orientation makes the viewing area plenty large for side by side images. In fact, I would recommend the Helix 5 to anyone in the market for a new unit. I bought mine because it was one of the least expensive units with all the features I wanted and figured that if I liked the side scan, I could sell this one and buy one with a larger screen later. After using it a few times though, I will definitely be keeping this one. If you are still waiting to try out side scan, you are missing out. I was amazed at how much faster I was able get on some fish. The GPS maps are another great tool to help you spend more time casting and less time searching. I added the hotspots map upgrade which made an already good product great. If you want to step up to the latest technology without breaking the bank, this unit is your best bet.

Not a bad unit, very clear screen, easily readable from all angles, during daylight. Chirp does make a difference and add more clarity to the sonar output. I didn’t like the preloaded maps, I had to spend extra to get better maps.

Just got the portable versio of this unit and when I went to assemble it I found that they did not include the soft s case. I emailed customer service to see how I could arrange to get one sent to me and all they did was respond with a copy and pasted message saying that I could order a replacement online ($75). When I responded stating that the soft case should have been included with my unit and that I shouldn’t have to pay for their mistake, they simply responded with the exact same copy and pasted message telling me to order one online. Called numerous times and was never able to speak with anyone, the call just went straight to an answering machine and my messages were never returned. One of the worst customer service experiences I’ve ever had…. should have went with a Lowrance.

I got mine with my boat I love it