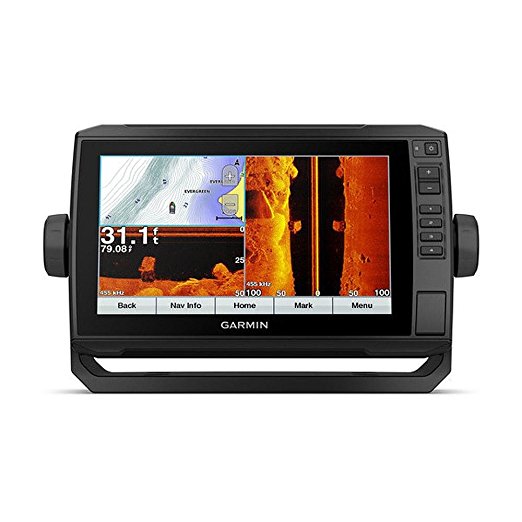 Garmin may have initially made a name for themselves by providing one of the first and most reliable land-based GPS technologies available for the consumer at-large. Since that time, Garmin has pushed the boundaries of both GPS and sonar technology for use by normal consumers and certain professionals alike. In that vein, Garmin has produced an amazing quality fishfinder and chartplotter in the Echomap Plus 93sv.

As their flagship model for the high-end consumer-grade market, this fishfinder and chartplotter combo comes with an impressive array of features that leaves most of their competitors in the dust. Granted, all of the flagship models of high-end marine sonar manufacturers provide an excellent product, but the Echomap Plus 93sv offers a great range of qualities that set it apart from both from a comfort and convenience standpoint as well as quality.

This is easily the most important feature to any fishfinder on the market. If the fishfinder is only okay or even subpar at finding and properly identifying fish, then all of the additional bells and whistles in the world will not make up for its poor production. That said, detecting fish is more than simply having a solid SONAR system–though that is undoubtedly a big part of it too.

As a high-end fishfinder, you expect the Echomap Plus 93sv to provide some legitimate beam coverage. Most low and mid-level fishfinders will only provide a single beam or perhaps a narrow and a wide beam angled below the boat. When it comes to the Echomap Plus 93sv, you will get that and more. For one, the bird’s eye beams range from 15 degrees for the most detailed image to 45 degrees with a detail level comparable to many competitor’s primary sonar resolutions.
Still, this fishfinder comes with a feature called SideVu. This essentially allows the Echomap Plus 93sv to provide an image from both the bottom and the side of the boat which ultimately allows you to better position your boat and find fish that might otherwise be spooked should you have to drive the boat over top of them. The SideVu feature basically supplements the overhead beams to provide a supplemented wide-angle beam.

The frequency range of your fishfinder will ultimately determine either where it is a viable fishfinder to use or what specialized type of fishing it is most suited for. When it comes the Echomap Plus 93sv, the only real answer is “all of the above.” This is because the Echomap Plus 93sv uses such a wide range and variety of different frequencies that it is one of the few, legitimate all-purpose finders suitable for both shallow trolling as well as deep sea fishing.
When it comes to the Echomap Plus 93sv, its 4 different sonar frequency settings provide the variation to be able to do it all. First, for most of the general fishing settings, you can use the CHIRP sonar which uses a range of frequencies layered on top of one another in ascending order to provide an exceptionally clear view. This is most useful in rivers and most lakes that are shallower than about 1000’. Even better, the Garmin CHIRP actually comes with 3 different settings for shallow, mid-range, and deeper waters.
Of course, for professional or near professional levels of fishing, you will want a transducer that can specialize its frequency for a specific range depending on the setting and the type of fish that you are fishing for. The Echomap Plus 93sv comes through once again to also offer a traditional style of sonar that allows you to select your frequency between the standard ranges of 50, 77, 83, and 200 kHz. Only the 192 kHz frequency is missing from the most common ranges, and that is no great loss with the 200 kHz frequency in tow.
Still, what makes the Echomap Plus 93sv so impressive in regards to its sonar has got to be the ClearVu and SideVu functions. These are the sonar technologies that provide the advertised “photographic” clarity. Keep in mind, with a frequency range that begins at 260 kHz, makes a stop at 455 kHz, and ends at 800 kHz, you will not be getting that kind of clear resolution at the larger depths. However, for about 450’ or less, these technologies provide incredibly detailed images both below and beside your craft.

While the beams and the frequencies that the transducer casts and reads respectively will generally determine the breadth and clarity of the image provided, it is the transducer’s continuously used power rating that ultimately determines the range and depth of its SONAR technology. Once again, the Echomap Plus 93sv is one of the leaders of the pack by providing an impressive 500W RMS power.
With this level of power, the Echomap Plus 93sv could potentially cast the 50 kHz frequency used for deep sea fishing an astounding 2000’. To put that in perspective, that is longer than ⅓ of a mile. In fact, even the high-frequency beam of 200 kHz–which is generally used for shallower waters but provides detailed images–still has a range of 500’. Basically, there is nowhere for the fish to hide from the Echomap Plus 93sv.

This is by far one of the best qualities of the Echomap Plus 93sv among a plethora of legitimately great qualities. To put it simply, you will find it difficult to discover an all in one unit fishfinder with a larger display. At 9” diagonally, the Echomap Plus 93sv is either as large or larger than virtually all of the other all in one fishfinder displays out there. Pretty much the only way to get a larger display is to have a multi-part fishfinding and navigation system connected to a dedicated display.
Aside from the size of the screen, the display also provides adaptive brightness technologies so that you can take the Echomap Plus 93sv to pretty much any setting and still be able to see just as well. In a brighter setting, the display will actually get brighter to compete with the sunlight that would normally wash out the image. For nighttime fishing, on the other hand, the Echomap Plus 93sv will dim a bit but still use a backlit display so that you can see the fish, but they cannot see you.
Finally, the Echomap Plus 93sv goes a step further by enabling their display screen to function as a touchscreen as well. Of course, this fishfinder still has a button-navigated panel if you prefer the traditional method, but if you are comfortable with touchscreens, this display will allow you to quickly navigate through the Garmin’s menus at a rate that cannot even be compared to a standard button-panel.

As a combination fishfinder and chartplotter, the Echomap Plus 93sv is decent but not necessarily as good as some of its competitors. Keep in mind, only the flagship models of any brand, whether it be Raymarine, Lowrance, or Hummingbird, are going to be able to truly compete with the Echomap Plus 93sv. Still, it is not at all unheard of for those flagship models to provide more robust maps as well as tracking capabilities.
That said, the Echomap Plus 93sv is no slouch in this department offering detailed charts and maps for coastal waters, rivers in the US, and rivers in Canada as well as a general, non-detailed, world map. On top of that, you are able to save up to 5,000 separate waypoints comprising 100 different routes or 50000 total points saved on 50 different tracks. And of course, the Echomap Plus 93sv is compatible with most of the top chart plotting technologies to be integrated into a larger system.

While the Garmin Echomap Plus 93sv may not provide the absolute best features for all categories, it should still be more than enough fishfinder for the vast majority of fishermen–including professional fishermen. In fact, so long as you are not looking for the best onboard chartplotter, this is easily one of the better pure fishfinders available.
Also, when you consider that the Echomap Plus 93sv transitions smoothly to a larger navigation system with AIS, DSC VHF, and FUSION-Link compatibilities, its onboard chart plotting limitations are not really an issue. Still, with ClearVu and SideVu sonar functions as well as an incredibly large display with an integrated touchscreen, there are few competitors that can match the Garmin step-for-step in all the most relevant categories.

Purchased this unit at first of the year. Installer said the quick connect bracket was not functioning properly. Called Garmin and they said it happens. Offered to send me new bracket at no charge and told me I’d have it it 4 days. When it didn’t arrive, I called and they said it was back ordered and I’d receive it on Feb. 2. Now looks like it won’t arrive until Feb. 4. I am not amused and not impressed with the product or the service.