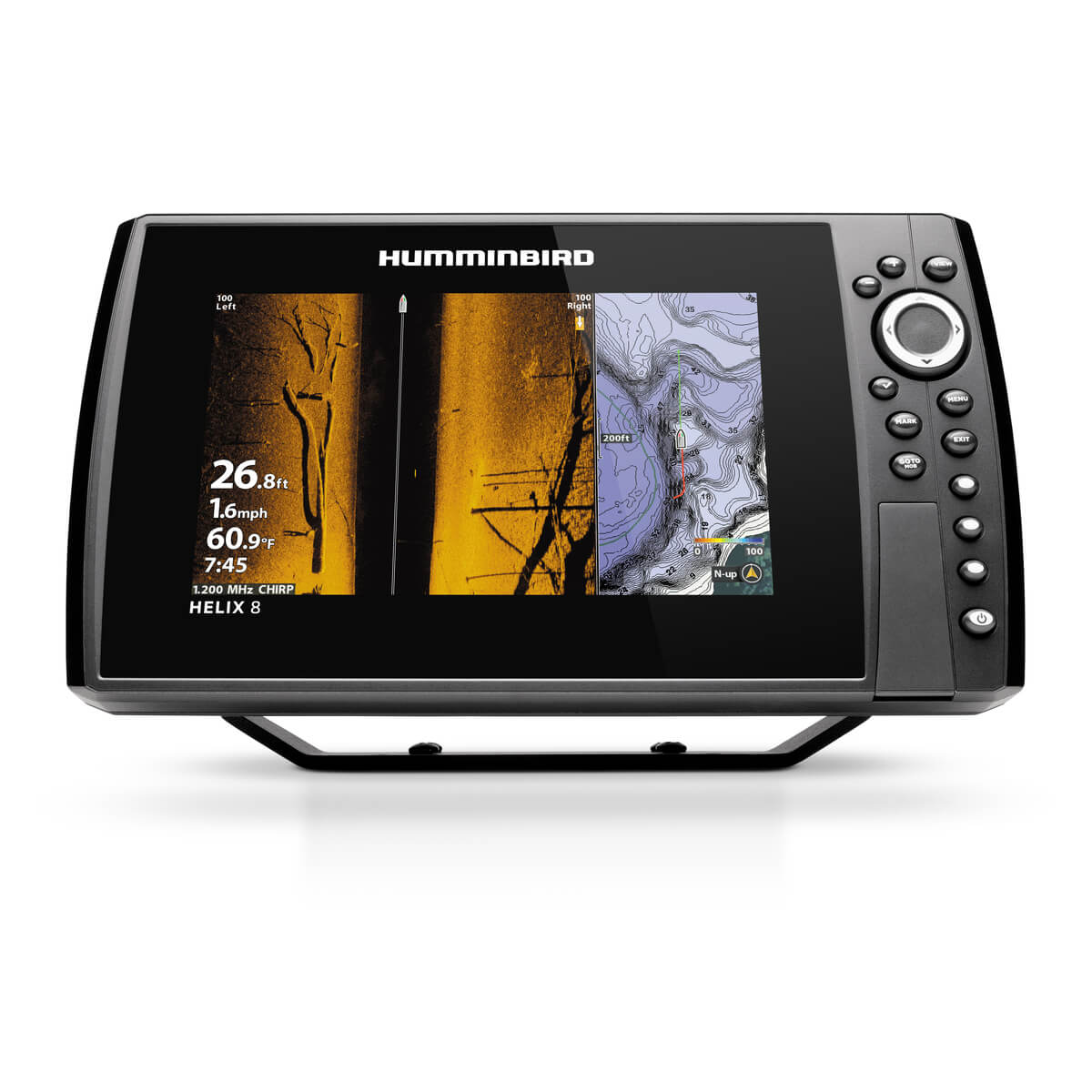 The new 2019 Humminbird lineup includes the Helix 8 CHIRP Mega third-generation fish finder. With upgraded technology, the device means that anglers have a much better likelihood of locating and catching the fish they are after. Humminbird offers the new Helix 8 with CHIRP alone or equipped with down imaging, side imaging or a combination of the two sonar systems. The new Humminbirds are also designed to power up quicker. The addition of the view button enables you to switch between a variety of full screens or split screens easily.

The Mega imaging sonar provides even more clarity than ever before. See photograph-quality images of what lies up to 125 feet beneath your vessel on the eight-inch, 800 x 480 color screen. With Mega sonar, you get up to three times the sharpness compared to traditional sonar. Using traditional 455 kHz sonar, you can often make out the structures that are below the water’s surface. However, the images are commonly blurred or fuzzy. But, with Mega technology, the details of structures beneath the water stand out better and are more clearly defined. In Mega imaging mode, you also have the option of emitting a signal at the 455 kHz, the 800 kHz or the 1200 kHz range. Zoom in or zoom out for the magnification you desire without distorting the image.

The dual spectrum CHIRP technology gives anglers the option of choosing the start and end frequencies. Humminbird’s CHIRP scans downward in a cone shape. Humminbird’s technology is also designed to emit more pulses faster, which equates to more detailed information and enhanced target differentiation. You have the option of selecting between using the full mode at 28 to 75 kHz or the narrow mode at 75 to 155 kHz for the greatest amount of detail. Use the wide mode at 130 to 250 kHz for covering a greater area.

The technology enables you to view the depths beneath the water in two different modes. The Max mode displays the smallest of details. On the other hand, the Clear mode captures larger targets in greater clarity. Add or remove particular details and background noise as the fish finder has 20 levels of sensitivity. The sonar also clearly displays the water temperature, the bottom depth and the speed of your vessel on each displayed image. With another push of a button, watch the action of your lure under water.

Choose a Humminbird Helix 8 CHIRP Mega G3N with side imaging to get a 180-degree side-to-side look at the world below the water. The extremely thin beam scans 400 feet to the left and 400 feet to the right simultaneously to discover rock, boulders, fallen trees, vegetation and other structures where larger fish lurk in search of food. Pair side imaging with traditional sonar in order to see the fish more clearly. The technology functions by making slices of individual images and adds them together to create a realistic view of the marine life and objects under the water. Trigger the Mega function for even clearer monochromatic images. When you find a spot that looks promising, or where you have success, mark the location on the GPS. Best of all, you get crystal clear images regardless of the water clarity.

Anglers purchasing Humminbird models having the down imaging feature find that the technology functions similar to side imaging sonar. However, the display seen provides a snapshot of what one might see if diving under the water and scanning the terrain from what the fish might see. The sonar is ideal for distinguishing between vegetation, boulders and rock or manmade objects. Distinguish between a ball of baitfish and brush or larger game fish. Combine the feature with Mega and get a dramatically clear, monochromatic view of the water’s depths. Split your screen to include traditional sonar and see the distinctive angles that represent fish targets.

The built-in feature enables anglers to get a glimpse of the terrain that lies hidden beneath the water’s surface along with other points of interest. In this way, you might target the likely places where fish are hiding and looking for food. The maps also provide the latest information concerning buoys, day markers and terrain contours in addition to displaying depth markers and other data. The charts represent more than 10,000 lakes in addition to the U.S. Coast.

The feature enables you to create maps in real time of your favorite fishing locations. The software also provides access to Humminbird LakeMaster. Create maps with contours, bottom features, vegetation or manmade objects while you scan the water. The technology stores up to eight hours of recordings. Or, use one of the two micro SD card slots and save the information on a micro SD card.

By using Bluetooth, anglers quickly pair their Humminbird with a smartphone or other mobile device wirelessly. Keep your software up to date by getting upgrades via the Humminbird FishSmart app. Humminbird also offers a Bluetooth remote that lets you control all of the fish finder’s features from a distance. The connection is also handy for getting the latest fishing or weather reports based on your specific location.

Using the onboard Ethernet, you might consider linking multiple fish finders. The technology also enables anglers to add other programs.

Select a fish finder that combines sonar with GPS technology to enhance your mapping abilities. With GPS, anglers are able to mark up to 2,750 waypoints, 45 routes and 20,000 points of reference.

The Helix 8 CHIRP Mega is compatible with:

Each Humminbird Helix 8 CHIRP Mega G3N comes with the mounting hardware, the gimbal mounting bracket and the power cable. You can also get your Humminbird with or without the transducer. Humminbird also offers a one-year limited warranty on the device from the date of purchase. The company additionally offers a 30-day warranty on all of its cartography products.

The patented technology of Humminbird’s fish-finding sonar systems is virtually unsurpassed compared to competitive models in similar price ranges. In short, you get more for your money. In this way, Humminbird fish finders remain a top-selling product in the marine world. The Humminbird Helix 8 CHIRP Mega G3N is appropriate to use on fresh or salt water. Take it along when you go ice fishing. The mount that comes with the device enables you to easily remove the unit and take it with you wherever you go. The fish finder is also created to be easily installed on any type of boat, canoe, kayak or pontoon.