The proliferation of marine accessories has made choosing a battery more important. It’s crucial to understand your needs and your options. Starter batteries are made to deliver a big jolt to crank motors, but take more time to recharge, while deep-cycle batteries provide lower amperage over long periods for trolling or running appliances. Neither type will last long if it’s used for the wrong purposes.

The three types of marine battery are flooded or wet-cell, gel cell, or AGM (absorbed glass mat). Wet-cells are traditional water-and-acid batteries and generally cheaper, but more high-maintenance and less safe. In gel cells, the acid is mixed with a silica to form a loose mass. Many batteries today use AGM, which is a layer of glass fibers providing tiny gaps to hold the electrolyte.

Battery “group” numbers are a reference to physical capacity categories. Finding the right battery for your needs isn’t an exact science, as it has a lot to do with the size of the trolling motor and other power uses. But here are some of the best picks in deep cycle marine batteries according to your power demands.

Best Battery for Trolling Motors with Thrust of 25lbs or Less 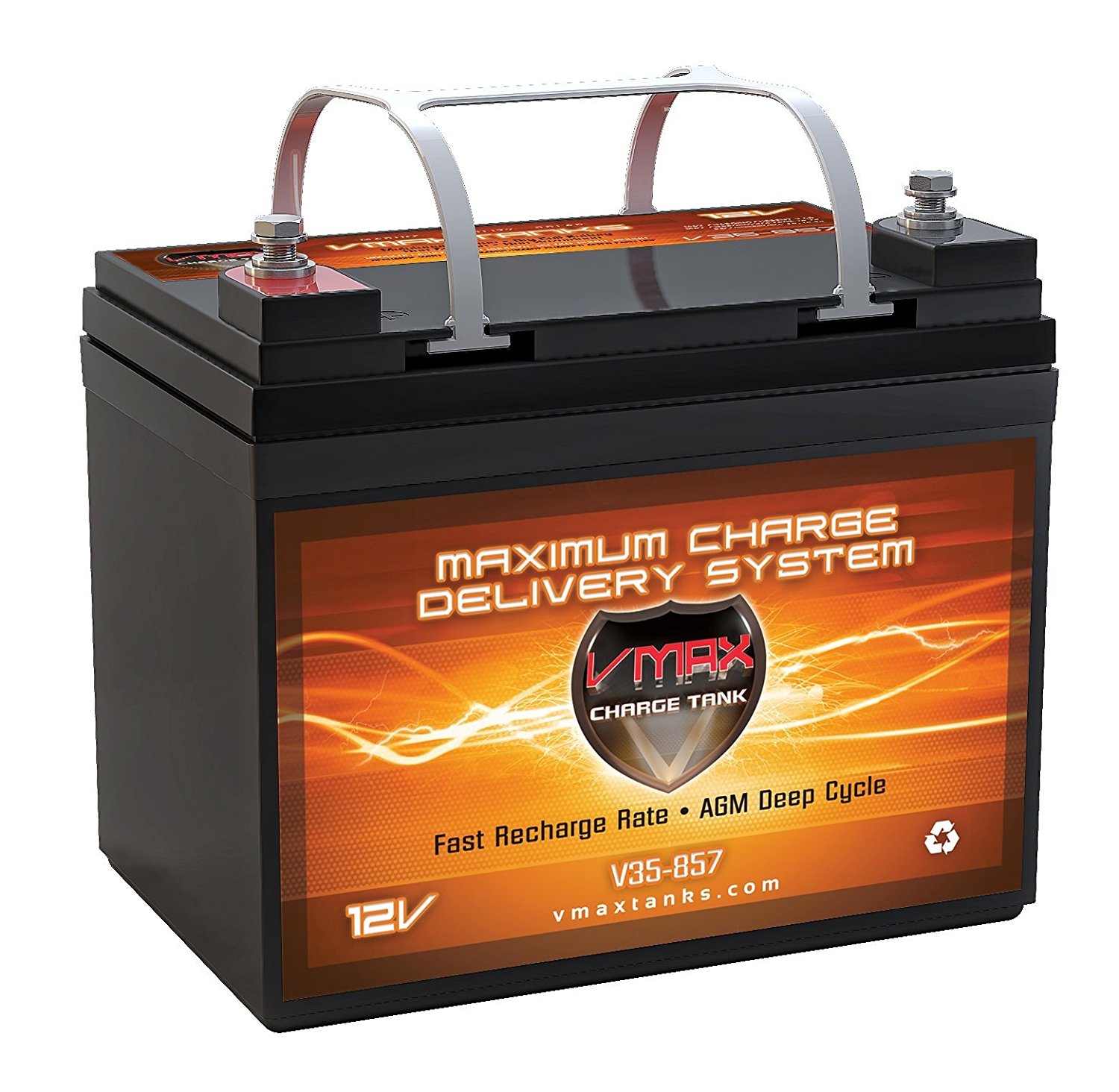 The Vmax857 is a compact 35 AH Group U1 deep cycle battery designed for a variety of lighter trolling motors. At dimensions of only about 8″ x 5″ x 6″, it doesn’t take up much room yet allows up to 9 hours of trolling time. VMAX utilizes AGM designs between durable plates made from thick tin-lead alloys, making for a low-maintenance design that doesn’t require adding water or electrolytes. You can feel it in the construction as this small battery weighs in at 25 pounds.

The rugged design also adds resistance to shock or vibrations, and is also meant to speed recharging even after deep discharges. A convenient carry handle and the sturdy plastic casing also make it easy to carry back and forth between boat trips for recharging and storage. Almost any 3.3 amp battery charger will do, though some have reported good results with portable solar chargers.

VMAX delivers on its promises as this is a sturdy little battery that holds a charge well. It’s considerably lighter and offers no less trolling time than some much larger wet-cell batteries. It is designed for lighter vehicles with smaller motors, so those using it with 30-pound or higher thrust trolling motors have reported shorter operating times or even dead batteries. They should have considered a bigger battery. A few people also report issues with VMAX’s customer service and return policies. But for it’s intended purpose, the Vmax857 is an affordable, trustworthy, and powerful little battery that makes going out on the water much easier.

Best Battery for Trolling Motors with Thrust of 25 – 45lbs 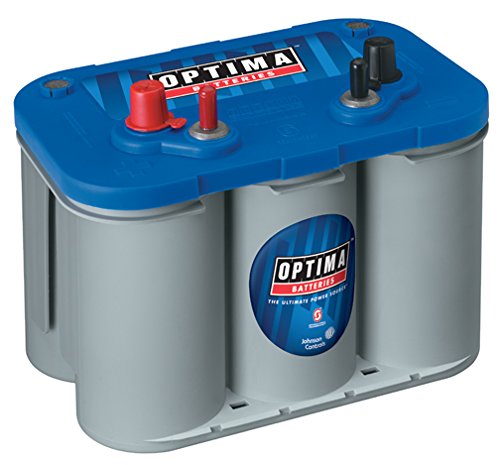 Optima’s D34M is engineered to be a dual-purpose starting/deep cycle battery for the heavier demands of motors with 25 to 45 pound thrust. It is larger and pricier than light-duty models, but surprisingly hefty at a weight of 43.5 pounds and dimensions of only 10″ x 7″ by 7″ tall. It offers a powerful 750 CCA, 55 AH, and stainless steel terminal posts. It can be mounted almost anyway you like, is highly resistant to vibrations, and provides a 120-minute reserve runtime at light speeds so you run the battery down and still make it home. It also provides a longer shelf-life during storage periods.

Optima uses a special SpiralCell technology of tightly wound, electrically opposed pure lead plates. This allows a more precise design that is also one reason for the higher price. Coupled with AGM technology, the SpiralCell batteries were created to provide more consistent output during deep cycle use and more efficient charging. The D34M is also meant to support a variety of electronic accessories with minimal drain on the battery, making it a good choice for RV as well as boat trips. Shorter charge times, and the ability to handle numerous recharges, help to ensure you get longer life from Optima’s batteries.

There’s a reason why Optima has sold millions of these batteries. Compact and a little heavy but still very portable, it nonetheless delivers stellar performance. At the lighter end of it’s range, it not unusual to get in eight hours of fishing in strong winds with plenty of juice left at the end of the day. It’s important not to run any battery dead to preserve it’s useful life, but that isn’t usually a problem with the D34M. Some older Optima batteries are beasts that have been in use for a decade and even more, but are still going strong.

Most of the few complaints about the D34M come from poor packaging and shipping. Get yours from a reliable supplier and you shouldn’t have any problems with the Optima D34M for years to come.

Best Battery for Trolling Motors with Thrust of 45 – 55lbs 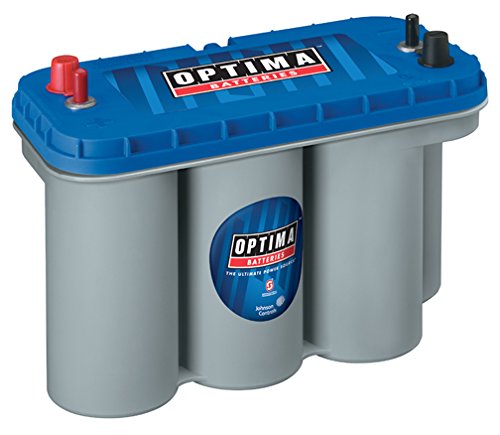 The D31M is the next step up from the D34M for those who want a little more power for their trolling in every respect. This starting and deep cycle battery provides an impressive 900 CCA or 1125 MCA. It delivers 155 minutes of reserve capacity and 75 AH in deep cycle use. Of course, this comes in a larger size and weight: about 13″ x 7″ by 9″ and 60 pounds. It has the same stainless steel terminal posts, impact resistance, SpiralCell engineering, and a heftier price.

But that cost is only a slight hike for the additional power that the D31M delivers. It will crank your motor on even the coldest mornings and perform well through the day. Designed for 12 volt systems, the D31M has also known to crank and run 24 volt motors adequately. It can be fully recharged at up to 15.6 volt currents and in as little as six hours, with an amazing resistance of just 0.0025 ohm.
.
Considering the results you get, the slight increase in price is a worthwhile investment. Some users have reported shifting the D31M back and forth between their boat and their RV for years on end without any problems, even after a complete drain and recharge, or extended storage in hot climates. The sealed AGM design is also more eco-friendly as you won’t get the leakage or fumes you might from a wet-cell battery no matter where it’s used. It eliminates the need for a separate trolling motor even on boats of 24 feet in length or more. This kind of dependability is more cost-efficient than spending money on multiple wet-cell batteries that need frequent maintenance but don’t last half as long.

Like any battery, the D31M can fail to due to rare manufacturer defects or outright abuse. But Optima’s D31M delivers more quality, power, and durability than most 31-sized marine batteries, or indeed most marine batteries at this price range.

Best Battery for Trolling Motors with Thrust of 55lbs or More 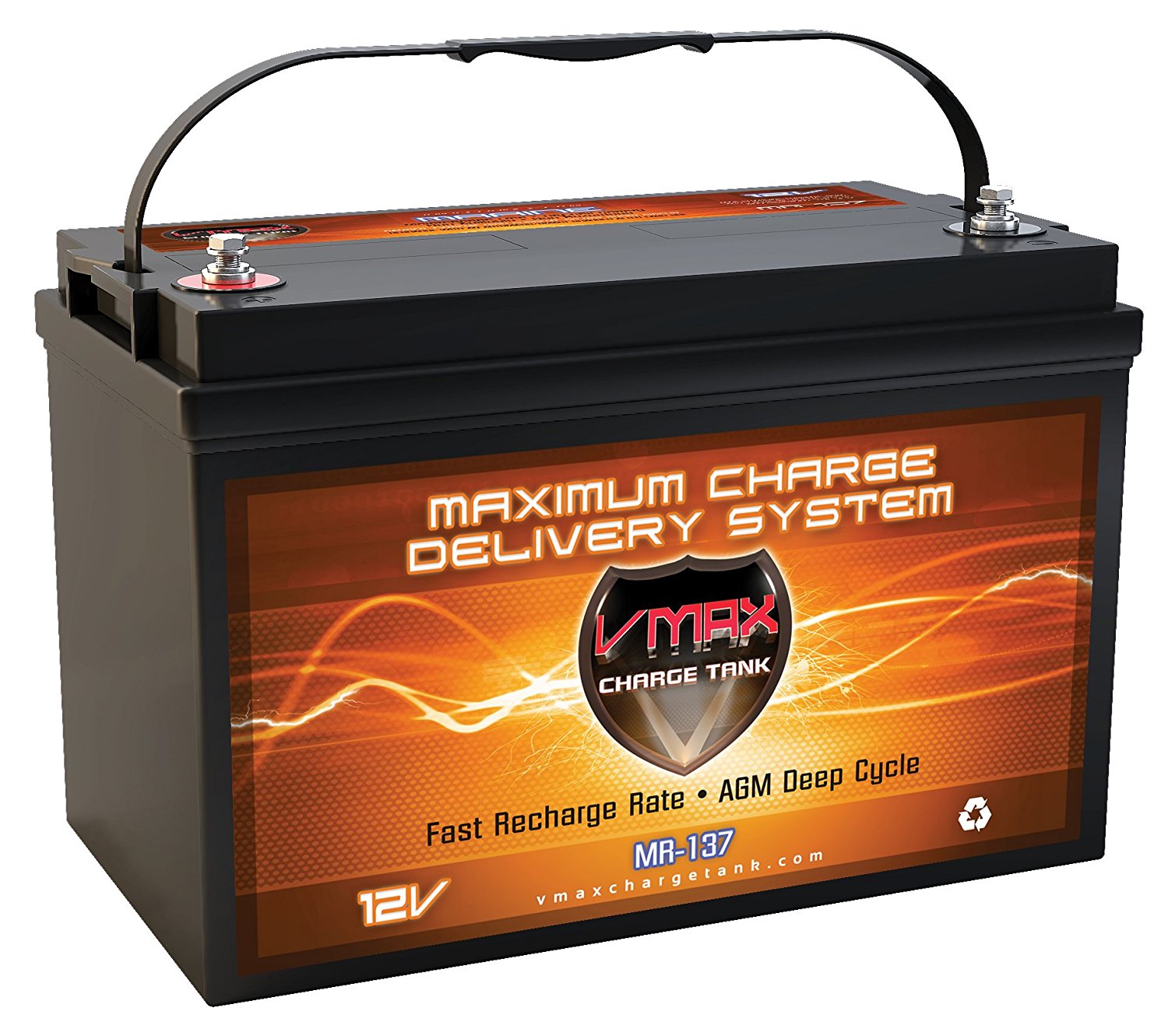 The MR137 is a great option for serious, heavy-duty trolling needs on larger power or even pontoon boats. This AGM battery delivers 120 AH for up to 110 pounds of thrust. The battery’s dimensions are about 13″ x 7″ x 9″ but it’s a monster at a weight of around 75 pounds. That’s a lot to carry without a buddy or cart to ease the load and a high shipping cost if you want to return it. But for a true heavy-duty battery, that’s what you should expect.

The internal cells use a highly porous version of AGM to contain the electrolyte and eliminate leaking or the need to add more. These are contained in a heavy duty, shock-resistant tin alloy grid within a rugged tank, and are expected to provide good performance for eight to ten years.

It’s surprisingly reasonable in price. VMAX recommends it’s “7-stage smart charger” but any 12 volt, 15 amp system will work. The VMAX MR137 is designed to recharge quickly even from a full power drain.

This battery’s performance is everything you’d expect from a heavy duty design. It can power a 55 pound thrust trolling motor and a 16 foot boat through wind and choppy waters with no hesitation and relatively little power drain. It gets high marks for durability. MR137s have been known to get retrieved from lake bottoms still holding a charge. It’s can be relied on to provide a day of use while still powering radios, LED lights, sump pumps, fish finders, and charging devices. If you don’t need all of that, the MR137 may even be overkill. And that’s not really a bad thing considering a great price. If you do need that kind of power, VMAX’s MR137 is a steal.

Bear in mind, nothing is 100 percent perfect 100 percent of the time. But this battery is so well made it’s definitely worth the investment.