Seated among the greatest high-end sonar technologies that can be integrated into a fish finder is Side Imaging. This intriguing feature presents users with the opportunity to get a more enhanced view of the structure of the water bottom. Additionally, it allows for better pinpointing of where fish are located, when compared to common sonar technologies.

To note, different manufacturers refer to the Side Imaging feature in various ways. For Humminbird it is “Side Imaging,” for Garmin it is “Sidevü,” and it is “SideScan” for Lowrance.

Side Imaging covers a more extensive water surface, under and around the boat. Unlike regular sonar, you won’t miss potential game. 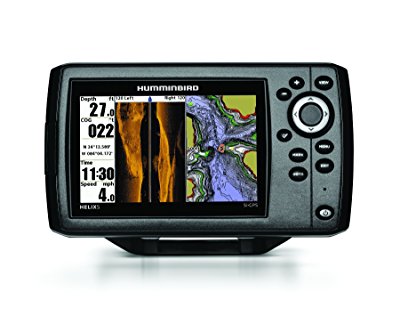 The Helix 5 SI has been established by Humminbird as a unit in its fish finder production line. It is furnished with a 5-inch, LED display, alongside a 256 color depth and a resolution of 480×800 pixels. This merger operates to supply images of exceptional quality.

For such a cost-effective unit, the Helix 5 SI is able to take spectacular images, and is furnished with a Compact SI transducer. It boasts revolutionary imaging capabilities, for instance, Down and Side Imaging, DualBeam Plus 2D sonar, and GPS mapping. Besides, only a 455 kHz frequency can be used with Down and Side Imaging, which covers a range of 85 degrees.

Its TFT display can produce a landscape orientation, and has a 256 color depth and a matrix of 800×480 pixels.

Given that you want to save your maps or areas you’ve been, there is a Micro SD card slot available. This also enables you to backtrack to recent locations.

It also has a 1,500-feet depth capacity. The unit’s GPS chart-plotting feature employs an integrated UniMap. In addition, it also flaunts an IPX5 water-resistant rating. 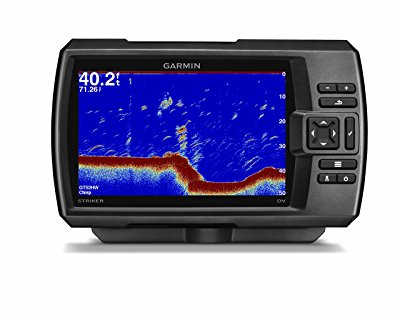 Sound waves are the initiating factor of the capacity of the Garmin Striker 7sv. To acquire the most complete images of the aquatic territory, a scope of sonar frequencies is deployed. Fundamentally, the more the frequency decreases, the greater the distance it’ll go.

Possessing a weight of 1.5 pounds, this unit has  dimensions of 9.3 x 5.5 x 2.3 inches. It also flaunts a 3.6 by 6-inch display, with a resolution of 800 x 480 pixels, which allows for numerous crisp images to be shown concurrently. The display also has a dazzling backlighting feature, which makes it easily readable even on the sunniest days.

Following the retrieval of sonar information, the Garmin Striker 7SV offers a variety of viewing options. There are low-range and mid-range frequencies that are employed to instantiate maze-like images that highlight isolated fish as they pass along. Objects of a more considerable size and density are shown in red, then transitions through yellow to green, as objects start to get more compact and lighter.

In addition, due to its highly responsive integrated GPS feature, tracking back to your most-liked fishing hotspots is made easier. Determining your exact location can also be performed. 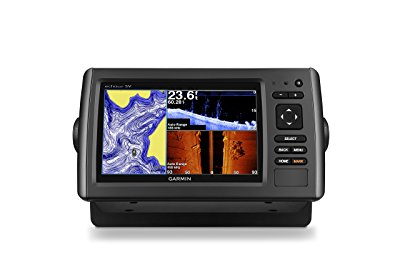 The echoMAP 73sv is the new inclusion to the developing product line of Garmin’s sonar inventions. It is manufactured with integrated SideVü and DownVü sonar mechanisms, which collaborate to dispense impeccable images.

First of all, it has a 7” display which has a high amount of contrast and an automated backlighting feature. It also sports a 77/200 kHz paired-beam built-in sonar. However, it uses only one transducer, which supplies a high-definition image to a depth of 750 feet.

The echoMAP 73sv has the ability to synchronize the timing of the sonar return with the location of your watercraft, to store digital data for viewing on a computer, using  special software.

Also featured is a microSD card aperture if you want to save your favorite destinations or capture and store screenshot-images. This slot also lets you expand memory, if you opt to save additional maps. Its preloaded LakeVu HD mapping system supplies above 17,000 immensely comprehensive maps of lakes, and rivers.

The AutoGuidance function gives you the opportunity to pick your journey’s end and gives you a safe route to get there. Additionally, you can estimate the time that you’ll take to arrive and evaluate hazards that may pop up while on your journey. 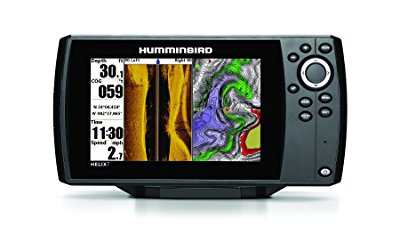 The Helix 7 is featured as one of the most recently introduced fish finders from the Helix series, and stands as one of Humminbird’s established units. The Helix 7 boasts an amazing 256-color display with glass-bonding technology. It also has an 800 by 480-pixel matrix, with TFT LED backlighting.  This increases the possibility of easier navigation and fish finding, by allocating more space, by way of its spectacular display, with a segmented screen.

In addition, it is equipped with a binary-sized memory that enables heightened performance in generating maps and lowers the screen refresh rate. When put aside with the Helix 5, it displays sonar images with a higher quality and refreshes the maps while you speedily travel along. In contrast to older variants, the well-built gimbal mounting bracket on the Helix can easily be adjusted. It also has dimensions of 10.54 (W) x 5.80 (H) and a depth of 3.68 inches.

The Helix 7 SI GPS is seated among the most confined units in the Helix line of products. It unveils various sonar features such as Down Imaging and Side Imaging.  It also possesses SwitchFire Sonar, alongside its traditional DualBeam Plus attribute. Subsequently, you can get your fishing game on, regardless of the game or the state of the environment. 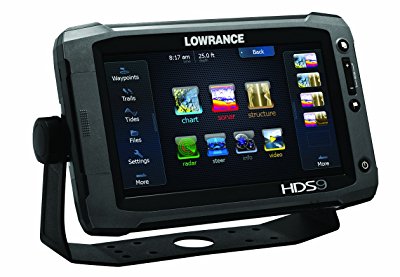 Standing as a new addition to the world of fish finding/chart plotting devices, the Lowrance HDS-9 Gen2 Touchscreen comes in with bells ringing.

With its StructureScan sonar imaging, you can enjoy realistic views of game and bottom structure. Additionally, the inventive StructureMap function allows you to view ongoing bottom images on your charts, in high definition. To use this, the unit has to have a discretionary StructureScan high definition transducer.

It sports an exceptional 16:9 touch screen 9-inch screen with a WVGA 800 by 480 matrix, along with a multi-display function and integrated Sounder technology.

With its touch screen capability, backtracking to your saved location is made easier. You can just simply swipe your finger across the screen in a right-to-left direction. This Trackback feature allows you to review your location history.

It is also equipped with a sonar scanner, which functions with frequencies of either 800kHz or 455 kHz. Hence, you can easily view the bottom structure of the water. Besides, 800 kHz presents a more enhanced resolution at shallower areas.

Merging these features together, there’s great assurance that you’re presented with one of the most broad-ranging packages that is available for purchase.

Comparison – Which Unit Should You Buy?

Fishing finders with Side Imaging sonar capabilities are becoming very popular in the world of fish finding/chart plotting. There is a wide variety of models from various brands to pick from. However, how will you know which one is the best one for you? Well, I’m now going to conduct a comparison of the Best Side Imaging fish finder.

In using the Garmin Striker 7sv, fish finding becomes a really simpler task. I say this because you can tag your hotspots and revisit them in the future. It also has a 7-inch screen which is perfect for viewing. It also features a highly-sensitive GPS system, CHIRP Downvü, and Sidevü Sonar technologies. These combine to determine your precise location and better locate game. Cool, isn’t it?

With the Helix 7 SI, however, it is possible to make use of Down Imaging and Side Imaging.  It also possesses SwitchFire Sonar, alongside its traditional DualBeam Plus attribute. As a result, you can get your fishing game on, regardless of the game or the state of the environment.

The Lowrance HDS 9 Gen2 Touchscreen, on the other hand, is also an excellent device. For one, it has a touch screen. Talk about modern technology! It also has a 9-inch display, which is a wider screen for multi-display functionalities. That’s quite effective and efficient to me. Its StructureScan sonar technology is also very high-end. Not to mention its Sounder Technology.

In comparison to the others, I’d definitely recommend the Humminbird Helix 5 SI GPS as the best choice to purchase. It is also very affordable, so you don’t actually have to rob a bank to get it. It is also moderately sized, so portability wouldn’t be an issue.

The most significant thing to consider when purchasing a fish fisher with Side Imaging is your budget. In truth, units that have this feature are not usually cheap. The larger the display, the deeper you’d have to reach in your pockets. Additionally, higher priced ones feature more navigational functions. However, it is very essential to have a wider screen for viewing Side-Imaging computations. The type of boat that you possess is also another important factor, as some boats are incapable of installing specific types of fish finders. Whether you have a motorboat, or similar types of boats, a Side Imaging fish finder would be perfect. However, for owners of kayaks or any similar vehicles, some adjustments will be required.

I am interested in:
1) a side scan unit with GPS that will record and save both the image and location data
2) one that works on batteries
3) a untit that can be easily moved from one boat to another but can be securlely mounted and used while in motion