A black box sounder is a generic name for a marine electronics device that contains the electronic guts of a fish finder in a self-contained ‘black box’, most of the time the box is not actually black.

They came into being in the early 1980’s when personal computers were first hitting the market. A few companies like American Pioneer took the guts of a personal computer added a display screen and viola you had a fish finder. 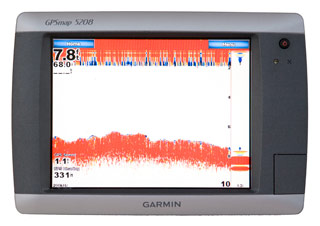 Data is being supplied to this Garmin network display by a compatible black box sounder.

Today a black box is normally coupled to a specific make and model of chartplotter to add fish finder capabilities to that unit or the multiple units that make up a network.

Like their standalone counterparts these black boxes connect to a transducer that sends sound waves into the water. The electronics inside the black box listens for changes caused by sound bouncing off objects like fish or the bottom. It also measures the time each pulse takes to return. This information is converted by the electronics inside the black box into a data stream that is sent to an associated display screen.

Once there you can read and interpret the information. These devices are not solely for locating fish. Obviously, a sounder will tell you the water depth, but in the right hands can reveal much about the bottom composition. This can be valuable information for anyone getting ready to drop the anchor in an unfamiliar area.