The objective lenses and all the gadgetry needed to operate the stabilization are contained in a box shaped case that tapers toward the front. 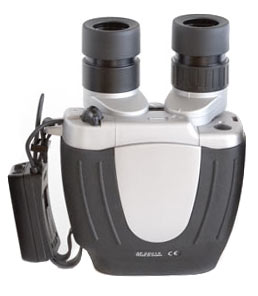 The rear panel contains controls and a pair of eyepieces that adjust for interpupillary distance in tandem.

Rubber eyecups twist in and out to accommodate different users. Detents in the twist mechanism allow the eyecups to lock in one of four positions.

A hand strap on the left side doubles as a grip enhancer and a case for the pair of AA batteries required for operation. We dont particularly like the external battery box in the hand strap, though it is adjustable. Wed prefer it to be removable and clearly this cannot be done due to its secondary function as battery holder.

The Bushnell Stableview 10×35 binocular weighs in at 44.7 ounces.

Bushnell uses two piezo gyro vibration sensors (basically a crystal that produces electrical signals when moved), one for the vertical axis and one for the horizontal axis, coupled to a pair of direct drive motors to move a prism assembly in the desired direction to counter any binocular movement. A microprocessor controls the system.

Focusing is done using a single diopter on the right eyepiece and a center-focus knob on the top of the case. The diopter scale is only marked with a plus, minus, and an index. No numerical scale is provided.

Two switches control the stabilization on the Bushnell binocular while a tri-color LED light indicates readiness and mode. Power-up the unit by momentarily holding the power button until the LED flashes orange. The LED will continue to flash orange for 5 seconds while a self-test is completed. The LED will go steady orange to indicate standby and ready for operation. To activate stabilization in the normal mode move the stabilization lever to active. A momentary press of the power button switches between normal and fine mode.

We rated the Bushnell Stableview binocular good for viewability. Our testers were very impressed with the Bushnell image stabilization system. It provided enough stability to read the numbers on the channel markers at a distance of 1 nautical mile.

These binoculars are not equipped with any front lens covers.