The Celestron Oceana is a rather compact marine binocular that stands about six inches high when resting on the objective lens caps. 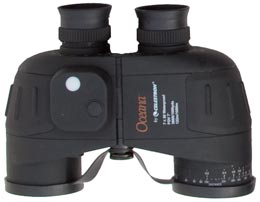 These marine binoculars also have a built-in compass and range reticle.

The diopter scale is located on top of the eyepieces, rather than on the preferred bottom side. Testers found the index marks small and hard to see, we noted the scale slightly off as well.

Even though the maker claims eye relief of 26 millimeters, we noted that when using these binoculars with eyeglasses some reduction in field of view was evident, as was a slight loss of edge sharpness.

All this combined led us to rate the Oceana only fair for focusing, optical acuity was good. The only viewing problem we noted was some difficulty reading the compass, the problem was worse when the user was wearing eyeglasses.

In the handling department we noted the supplied case offered good protection with the neck strap on the thin side and lacking any padding. At 38-ounces weight was within the nominal range.

Lens cap attachment to the center hinge is not our preference, but in this case it proved to work well as the caps fit the lens tubes properly, were easy to put on and remove, and were loose enough on the hinge to let gravity move them away from the front lens.

The Celestron Oceana failed the drop test. Something in the right lens tube came loose and caused them to be unusable.

These Celestron binoculars have middling performance but do carry a lifetime warranty.