The Cobra F55 is a compact no-frills entry level marine VHF radio that handles communication tasks without breaking the bank. This radio is officially designated the Cobra MR F55-D in white and the MR F55B-D in black.

The F55 provides for one-button operation of a number of key features including: making a DSC distress call, quick selecting channel 16 or 9, turning scan mode on or off, setting transmitter power to high or low, setting channel the group, using Dual Watch scan, and opening the menu page. 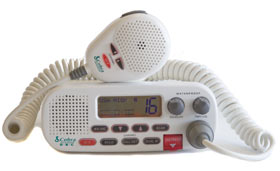 Channel selection is made with up/down arrow buttons located on the radio front panel and microphone. The microphone also has a quick 16 or 9 selection button.

Other functions are controlled via a set menu which is accessed by pressing and holding the Call/Set key. These functions include: display back light and contrast adjustment, key beep, time offset, weather alert, and DSC calling and information entry.

Small rotary knobs located on the right side turn the radio on or off and adjust volume and squelch levels. Squelch did not function on weather channels.

The microphone connects the radio front with a 6-pin metal PLT connector. Even though this connector has a plastic cover we see it as a possible source of corrosion intrusion if the radio is used in a saltwater environment.

The F55 transceiver earned an excellent rating for frequency stability but only a fair rating for transmitter power stability. The transmitter drifted off frequency during a number of tests, never enough to exceed government or industry specifications but enough to force us to rate the unit lower. Receiver sensitivity was rated good while selectivity carries a specification of 60 dB. Audio output was average at 86 dBA in our audio output testing.

The F55 has a smallish display screen that measures 2.2 inches long and just over .5 inches high. Channel numbers display in large block-style numbers on the right side. Messages onscreen indicate the channel group selected, transmitter power setting, when the radio is transmitting. There are no channel comments listed. When connected to a GPS unit the radio will display position onscreen. We rated the display screen good.

The F55 has two channel scan modes. Dual Watch monitors channel 16 and whatever channel you were on when you press the Dual W key to initiate the scan. The radio will also scan all channels in order by pressing the Scan button.

The F55 is now designated a class D radio for DSC operations. That means it has a a pair of receivers with one listening to voice communications and the monitoring DSC digital data coming in over channel 70. As part of this upgrade the radio has an enhanced display of GPS position data and related DSC status icons. This radio will send and receive distress, individual, all ships, and send and receive position data. It can store up to 10 individual MMSI numbers with a maximum of 9 character names.

The Cobra F55 marine VHF radio carries a 3-year warranty. This radio is waterproof to the tough JIS7 standard and will survive submersion to a meter for 30 minutes.