The Cobra F80 is a mid-priced marine VHF radio sitting at the top of the Cobra line offering some never before seen features. It couples a Cobra Marine exclusive, Rewind-Say-Again, with a powerful audio system and a large well utilized display screen. 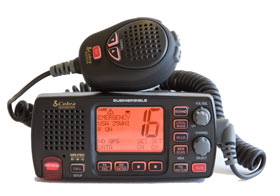 Channel selection is accomplished with a rotary knob. The microphone handset also has a quick 16 or 9 selection button and up/down pushbuttons to change channels and control menu choices.

Yes, the radio menu can be activated from the microphone handset. The remaining microphone button toggles between your two favorite channel choices.

A pair of rotary knobs located on a concentric shaft turns the radio on or off, set volume, and set squelch levels. Squelch did not function on weather channels. The microphone connects the radio front with a 6-pin metal PLT connector. In our opinion, even though this connection has a plastic cover we see it as a corrosion attraction on radios that will be used in the saltwater environment.

When input voltage falls below a certain level transmitter power automatically switches to low power. Receiver sensitivity was rated good while selectivity carries a specification of 60 dB. Audio output was good at 94 dBA in our audio output testing.

A large screen, measuring 2.2 inches long and 1.5 inches high, uses some areas of dot matrix technology to provide tons of useful information. Channel numbers are displayed in very large block-style numbers on the right side with the two favorite channels listed below. Messages onscreen provide channel comments, indicate the channel group selected, transmitter power setting, rewind on, local mode, and when the radio is transmitting or receiving. Alpha channels are listed too. When connected to a GPS unit the radio will display time and position onscreen. We rated the display screen excellent.

The F80 has two scan modes, Memory scan and Tri-Watch. Tri-Watch monitors channel 16 and channel 9 and whatever channel you were on when you pressed the Tri W key to initiate the scan. The radio will also scan all memory channels in order by pressing the M Scan button. At least three channels must be entered into memory for the memory scan mode to function.

The Cobra F80 has basic hailer, called Public Address, it provides voice and radio reception over a public address horn. Going into the set menu allows you to turn the PA on. This will transition the unit to PA mode and annunciate PA onscreen in place of a channel number. Use the microphone normally and your voice will come out over a connected hailer horn. When the microphone is not used received radio traffic will come out over the hailer horn.

The Cobra MR F80-D has two separate receivers, one to monitor voice communication channels and another to continuously monitor channel 70 for digital DSC calls. This makes the F80 a Class D radio. It is possible to enter the set menu and turn off DSC reception to avoid getting any DSC calls. Even with reception turned off you’d still be able to transmit a DSC call. This radio will send and receive distress, individual, all ships, and send and receive position data. It can store up to 20 individual MMSI numbers with a maximum of 9 character names.

The Cobra F80 has some unique features certain boaters may find handy.