Deeper Smart Sonar Pro+ has an average rating of 3.5 out of 5 based on 4 user reviews. 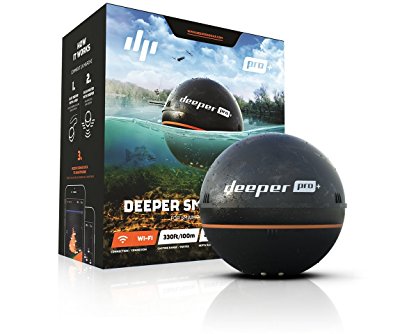 Deeper has taken the sonar fishfinder world by storm with their groundbreaking castable, smartphone fishfinders. With Deeper sonar fishfinders, you can fish from the shore, a boat, or even ice fish. The ability to have sonar while fishing from shore is by the far the greatest quality of a smartphone fishfinder, and the Deeper units are no exception. Smartphone fishfinders give anglers who fish from the shore a chip in the game of precision fish finding previously only available to those who own boats. Being able to stand on the shore and see the fish before you cast seriously ups the shore anglers game. And of course, with the addition of a mounting bracket, a Deeper unit becomes an affordable and agile boat sonar unit, with the added feature of being able to view the feedback via the app download for your smartphone. Don’t forget the Deeper’s potential as a flasher for ice fishing; know what is in your water column, and when to prepare for a strike.

To use a Deeper unit, simply hook the unit and cast it to the desired location in the water. Then, just easily monitor the sonar feedback on your phone or tablet!

The Deeper PRO and PRO+ are both compatible with smartphones and tablets running iOS 8.0 or later, and Android 4.0 or later. This allows you to view the sonar feedback on your mobile device, sent from your castable sonar unit. The downloadable app also gives you other features, such as a Solunar Forecast calendar, a Weather Forecast, Fish Notes, and more.

The Deeper PRO and PRO+ operate on a independent WiFi connection, meaning you can use the units anywhere, so long as both the unit and your device are charged. You can use the units in places you wouldn’t get cell service, because the Deepers emit their own WiFi field. The addition of WiFi is a great leap forward from the original Deeper Portable Fishfinder, which used Bluetooth. The WiFi gives the PRO models a much greater connection range of 330 ft (100m), compared to the 140 ft (42 m) Bluetooth range of the original Deeper fishfinder. Also, WiFi tends to have stronger connections than Bluetooth, so you can expect fewer disconnections during use.

At only 2.5 in (6.5 cm) in diameter, and 3.5 oz (100g) in weight, the Deeper PRO and PRO+ are truly mobile, giving you sonar fishfinder power you can take with you anywhere. ABS construction give your unit tough, impact resistant performance.

The two units are powered by a lithium polymer battery that supports 6 hours of continuous use, with a 2 hour charge time. Compatible with 110v/240v micro USB chargers.

Both the Deeper PRO and the PRO+ operate on dual beam 290 kHz (15o) / 90 kHz (55o) sonar frequencies. This gives you a greatly detailed look in a 15 degree cone, and lets you view the big picture larger cone as well. The units have a max depth range of 260 ft (80m) in freshwater.

Boat Mode lets you download free online maps and pinpoint your location on them. High Resolution display gives you a crisp, clear feedback. The high scanning rate of up to 15 scans per second ensures you don’t miss anything.

Both the PRO and PRO+ are able to be used as an ice fishing flasher, allowing you to examine the water column beneath your hole. You can use Split Screen mode to view normal sonar feedback simultaneously, so you can get a deadon view of your approaching target fish. Zoom feature makes everything easier.

And of course, the Deeper units have something to offer to boat fishermen: the ability to get sonar feedback from areas where you can’t maneuver a boat in order to use on-board sonar. Want to see what is under that bridge, or beside the logjam? Simply cast your Deeper fishfinder over to the area! 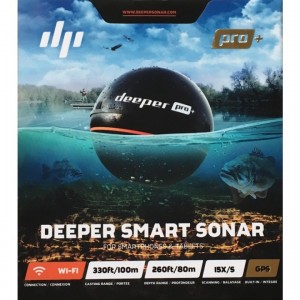 The Deeper PRO+ comes with an amazing feature to be packed into a smartphone fishfinder: bathymetric mapping. The PRO+ not only allows you to view lake maps, but to pull your unit over the water and create your own accurate, detailed bathymetric maps of the bottom. This feature is available to use even while fishing from shore. This is a big plus over the regular Boat Mode maps, which are not in close detail. With the mapping feature, you can create detailed maps of hotspots in your favorite water; you can make record of the bottom contour, so you know where fish will be hiding.

Both the PRO and PRO+ offer an extraordinary value for such a useful unit that makes the precision of sonar fish finding available to all anglers.

The PRO is less expensive than the PRO+, making it the first choice for this reason. However, if you fish certain waters heavily, the ability to make your own detailed maps of your favorite hotspots can be a big plus; if so, choose the PRO+.

How long is the maximum operating range of the device and the mobile phone?

Got the Pro+ version as a Christmas gift. Opened it, charged it and took it to my normal spot. Mapped the bottom and pulled in 5 black crappie with it on the first use. I would HIGHLY recommend this to any angler looking for a way to find more fish. Easy to use and WORKS. Now wherever I go fishing, I take my poles and my Deeper Pro+. Thanks for a great product!

I tried using the pro plus ice fishing but in the cold my range is only 10-15 feet. It’s good if you sit in the shack but I wanted to use it for expanding our fishing circle.

I purchased my plus pro unit a moth ago. I’m really pleased with the unit. It flat works!! For anybody who shores fishes or a small budget it works great

I really liked my Deeper pro plus. I do not like the customer service or the design of the product. I’ve had my deeper for almost 2 years. My deeper no longer takes a charge and no lights come on anymore. I took great care of my deeper. There is no reason something you pay $300 USD for should go bad after 2 years. I tried to contact customer support. I called a US number that my phone told me was a Florida number. Come to find out while talking to a customer service agent. I was in fact talking to someone in Lithuania. The only thing the customer service number can do for you is create a ticket and tell you that you will receive an email within 48 hours. I’ve been talking back and forth through email for 5 days. Not getting any help. Now they tell me my deeper is no longer covered under warranty. Since I can’t find my reciept. It doesn’t matter that my deeper is registered through their site and has been since the day I bought it. I still have the original packaging. Those should be sufficient for proof of purchase. The only thing they would offer me was $40 off of a new deeper. No thanks!