The Flir First Mate MS 324 puts the same night vision technology into the hands of recreational boaters that the Coast Guard uses to catch bad guys—all in a compact self-contained handheld device that is ready for action on a moment’s notice.

First Mate is actually a thermal imaging device that sees differences in heat levels of objects in its field of view. Because it uses heat detection instead of visible light things like people, which generate their own heat, and objects like boats, which both generate and absorb heat, show up in the eye piece clearly no matter how dark it may be outside. 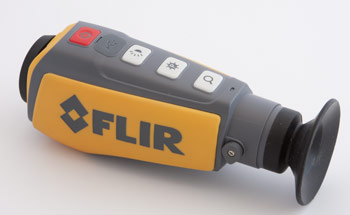 The First Mate MS 324 is the more sophisticated of two FLIR models of thermal handheld monocular to hit the market this year.

I found the camera itself to fit nicely in hand. To steady it up for the best viewing on a rolling boat my personal preference was to hold the unit with two hands, it can also be tripod mounted if you desire.

At just over 12-ounces in weigh and with an overall length of 6.5-inches and a maximum diameter of approximately 2.5-inches the First Mate is compact and lightweight. Other unit features include auto focus, adjustable diopter, color VGA LCD display screen with three palette choices and 2x electronic zoom.

Normal battery life is estimated to be between 5 and 7 hours following a full charge. The unit carries a 2-year warranty.

I took the First Mate to an area where I could look out over miles of ocean for my review. First let me cover some of the basics. The screen brightness is adjustable in one of five steps by pressing a top mounted button. A battery icon on the lower left corner of the screen stays on at all times. Another icon, which flashes on for about two seconds, any time the background mode is switched shows an symbol appropriate to the selection. When you are zoomed a 2x icon appears onscreen. The diopter adjustment near the eyepiece worked well for me and allowed me to use the First Mate with or without my glasses. That was nice.

In use I found objects that were fairly nearby to be displayed in good detail. However, when I zoomed in on one of these objects there was a noticeable loss of definition. Pixilation became evident too whenever the electronic 2x zoom was used. The ability to see detail in far off objects is somewhat restricted by the limited resolution of this camera.

The First Mate does what it says it will do by letting you see certain objects in complete darkness, though this capability comes at a high cost.