Using the Flir Navigator II to see through the dark—recreational boaters, light commercial operators and on-the-water law enforcement units have been using this thermal imaging night vision technology to turn night into day.

It was only about 10 years ago that earlier generations of thermal imaging systems began helping Coast Guard air and sea units interdict bandits and drug runners in the dark of night. Before this technology took hold the good guys were at a disadvantage. 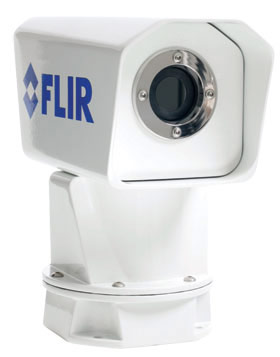 Regular photographic cameras use reflected light to create an image while infrared cameras like the Navigator II radiated thermal energy, or heat, to generate an image. The electromagnetic spectrum which is made up of everything from gamma rays to radio waves also contains a very small visible light spectrum and the infrared spectrum.

Wavelength variation is the only real difference between any of these energy waves. Infrared energy has a slightly longer wavelength than the visible light spectrum. An infrared imaging camera sees differences in the heat energy from the objects in its field of view.

If everything in the frame were exactly the same temperature, no contrast would exist so no image would be produced. In the real world, a variety of objects, create their own heat signatures, people and engines come to mind&mdsah;while other objects only reflect stored heat energy. Thermal imaging cameras detect objects that reflect heat and those that generate their own heat.

Mounting the camera and its associated hardware is fairly straightforward. If needed the video cable can be extended in 25-foot increments out to 100 feet. Wiring the unit involves connecting it to a 12v DC power supply and hooking up the video cable to a capable display.

It is always best to mount the camera itself as high as possible, on vessel centerline. When viewing the displayed image you should be able to see a portion of the vessel bow onscreen. That way you will be able to maintain situational awareness at all times when viewing.

The fixed field camera supplies a 36-degree field of view and is extremely easy to operate. You simply turn on the camera and display unit and then point the vessel bow wherever you want to camera to look.

Moving up to the pan/tilt version of the Navigator II adds a joystick controller to the system. This camera is taller, at just under 10-inches in height. The extra space houses the enclosed motor and gears that pan the camera 360-degrees and tilt up or down 45-degrees.

The joystick is used to pan/tilt the camera and turn the unit on or off. Additional controls vary the backlight brightness in three steps, reset the camera to a home position or toggle zoom between normal and an electronic 2x. You can also select one of four modes of operation that include night running, day running, man overboard, and night docking.

In addition to operational modes you will find five viewing modes. It is standard to view thermal images in white-hot mode where the warmest objects appear lighter toned or white onscreen and cooler objects appear more grey or black.

At Sea with the Flir Navigator II Pan and Tilt

To see how this camera works in the real world I took the Navigator II pan/tilt camera out on a my 25-foot Contender center console test boat. When the thermal image is first viewed onscreen it looks pretty astonishing. I looked over the bow of the boat and only blackness, but a quick glance down to the MFD display clearly showed several boats docked nearby off the bow.

Easing off the dock and cruising a nearby channel the first thing I noticed was how very fast the motor pans the camera, almost too fast. In my opinion, the Navigator would be better if the motor was geared down to move the camera slower.

Of all the viewing modes black-hot showed the most detail for me. Boats and occupants were clearly outlined with their bodies totally blacked. The standard white-hot mode appeared a bit too light in tone for my taste.

When I activated the zoom, it appeared that resolution dropped off somewhat. This made picking out details a bit more difficult. I used the camera to check out the structure of a concrete bridge over 1000 feet away. Onscreen I could clearly see the pilings, decking, and cars passing by even though I found it impossible to discern anywhere near this much detail visually.