The Furuno FM3000 has a rather large front panel that measures 6.5 inches wide by 4.3 inches high.

We rated the display on this Furuno VHF good, though it is not as big as some we’ve seen recently. 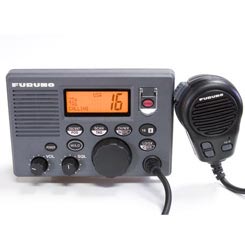 It is quite functional with 7 levels of backlighting adjustment, the ability to display Alpha channels, both transmit and receive icons, and channel comments.

This last one lets you set the radio receiver for either distant or local reception. In a congested harbor with lots of VHF radio traffic a receiver can be overwhelmed with signals, by setting the unit to local the radio will cut out most of the weak signals and provide better reception of the stronger nearby signals.

When GPS data is input to the radio both current time and position can be displayed on the screen.

Small rotary knobs located on the lower left side of the radio face control volume and squelch. The large knob in the center of the face is used for channel selection.

The Furuno FM3000 DSC capabilities are extensive and include the ability to make distress, individual, all ships, group, position request, position send, and geographical calls.

This radio listens for signals on channel 16 while monitoring other channels via Dualwatch and Tri-watch.

Scanning several channels at once is accomplished via normal or priority scanning. Normal looks at each channel in numerical order while priority checks channel 16 between other channels. Another refinement in scanning found in this radio is channel tagging. Channels are tagged to be included in a scan and untagged to be omitted.

This radio is not equipped with hailer or foghorn capabilities.

Optional add-ons include a remote microphone with controls and a voice scrambler.

This Furuno radio only carries a 2-year parts and 1-year labor warranty.

The FM3000 marine VHF radio is built for Furuno by Icom. It is the old Icom 502 with a redesigned front panel to match Furuno electronics. We found it to be a very capable VHF radio.