The Furuno FM4000 marine VHF radio is the only recreational grade unit in Furuno marine electronics lineup. They do offer a full GMDSS compliant commercial radio as well but it costs about four times as much the radio featured here.

The FM4000 ships with the radio, detachable microphone, plastic tilt bracket suitable for overhead or dashboard mounting, a fused power cable, and owners manual. If you decide to flush mount this Furuno radio at the helm or elsewhere keep in mind youd need to purchase the optional MMB-84 flush mounting kit or improvise your own mounting system. 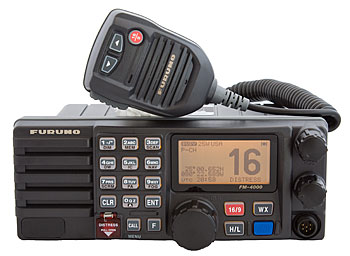 The radio front panel is not small, it measures 9.1-inches wide by 3.6-inches high.

When I include the rear cooling fins in my measurement I find the radio’s die cast metal chassis extends back about 6.2-inches from the front panels rear edge.

This is not a compact radio.

A flush mount step that varies between a quarter and half an inch in width runs around the face back. No gasket is provided to seal a flush mounted against water to pass between the radio and the panel.

The FM4000 is capable of using all US, Canadian, and International voice channels as well as receive all NOAA weather channel broadcasts.

The Furuno FM4000 has two rotary knobs located on the right side of the display screen, one controls audio volume and the other squelch level. Channel selections are made with a large rotary knob mounted below the display screen. Dedicated pushbuttons on both the microphone and radio front panel provide single button control for quick selection of channel 16 or 9. The microphone also has up/down pushbuttons to change channels.

The radio face also has four dedicated function pushbuttons located just below the right side of the display screen. These large pushbuttons select channel 16 or 9, weather channel group, transmitter power to high or low, and turn the unit power on or off.

The FM4000 has a full alphanumeric keypad in the middle third of the face. Most operations are controlled with a function key and one of the alphanumeric keys. Heres an example: Pressing F then 1 selects the screen backlighting dimmer, F then 2 the memory function, F then 3 starts and stops scanning, etc. Other keys select the remaining functions, some of which include Dual Watch, Intercom, PA (Hailer), and Foghorn.

Certain settings and function controls are accessed via the Radio Setup menu. This is where youd adjust display screen contrast, foghorn frequency, time offset, scan type, and several other items.

The FM4000 will interface with a GPS chartplotter and display data onscreen using a NMEA0183 interface. When connected to a plotter the FM4000 is capable of displaying boat position in latitude and longitude as well as course and speed. The radio can also connect to as many as two optional remote microphones.

When fitted with an optional remote microphone this Furuno marine VHF radio will provide intercom service between either one of the two microphones and the base radio.

The 30-watt hailer built into the FM4000 can be operated in one of two modes, either manual for public address with a listen-back feature or in the automatic foghorn mode. The public address hailer mode is selected with the F key and the numeric number PA key while the foghorn is accessed with F and FOG keys. In the automatic foghorn mode the FM4000 will sound signals for powerboat underway, powerboat underway not making way, sailing vessel underway, vessel under tow, vessel aground, and vessel at anchor. A horn and siren sound is also available. Foghorn tone can be adjusted from 250 to 850 Hz. We found the hailer/foghorn easy to use and able to produce more than adequate volume.

Up to two detachable microphones can be connected to the radio, one on the front panel and anther on the rear panel. An optional extension cable allows for a remote microphone location that would be especially useful when the radio is mounted overhead.

Some other special features of the FM4000 include a built-in high and low voltage monitor, Bluetooth capability when fitted with certain optional gear, optional voice scrambler compatibility, and a 5 minute transmitter timeout to prevent unwanted transmissions.

While transmitting I measured a draw of 4.8 amps at full power and .9 of an amp when set to 1-watt. The receiver sensitivity was rated good and the channel separation excellent based on the factory specifications listed. Audio output was an outstanding 98 dBA with volume at maximum while listening to a weather broadcast. As expected, there was some slight voice distortion at the extreme high volume settings. Overall the Furuno FM4000 is excellent.

This Furuno marine VHF boat radio has a large monochrome dot matrix display screen that is 1.3 inches tall and 2.6 inches wide, on the diagonal it measures 2.8 inches. I rated it excellent for viewability. Channel numbers are displayed at slightly over three quarters of an inch in height on the right side of the screen while position data fills the left side.

Scan modes are priority, where channel 16 or another priority channel is monitored between each scanned channel, and memory mode where channels are scanned on numeric order. Selecting F and the SCAN key turn scanning on or off while pressing F and DW sets dual watch scanning in motion. Dual watch alternates a scan between channel 16 and the selected communications channel.

The Furuno FM4000 is rated as a Class D radio for DSC operations; today this is a requirement of any new marine VHF radio. Being a Class D means the radio has two separate receivers built-in, one designated for voice communications and the second to continuously monitor channel 70 for any incoming DSC calls. Before you can proceed with using any DSC functions you must enter your MMSI number.

Penalties can be severe these days for improper usage of a marine VHF radio so make sure you enter your correct MMSI number promptly following radio installation. With an MMSI number in memory and when connected to a GPS unit the FM4000 will be able to make DSC distress calls that transmit your information and position data. The DSC Setup menu gives you a place to input your MMSI number, use your directory, and access several other DSC functions.

The Furuno FM4000, which incidentally appears to be a rebranded Standard Horizon GX5500S, is a feature filled radio with a powerful audio system capable of interfacing with several optional pieces of gear like a Bluetooth headset and a voice scrambler. It also has a large easy to read display screen and the full line of DSC functionality.