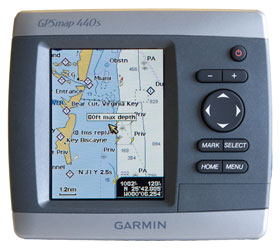 The compact 400-series plotters measure 5-inches high by 5.7-inches wide and just under 3-inches deep. They are available in several configurations.

The small ‘s’ suffix appended to the model number indicates the unit has an internal sounder.

The middle number in the model designation identifies the pre-loaded cartography coverage area, 5 is UK/Australia, 4 is U.S. coastal, 3 is U.S. inland lakes, 2 is base map only.

We flush mounted the Garmin 440s using the optional kit. Power and NMEA 0183 data pass through a single cable that fastens to the case back with a twist lock connector. An additional leg on this cable connects the supplied transom-mount transducer to the display unit.

An optional external GPS sensor can be added if needed or desired and connects to the unit using a BNC twist lock. We used the internal antenna for our testing. 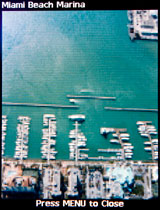 The Garmin 440s will display aerial photos of certain harbors and points of interest when equipped with an optional Garmin Visions chart card.

All 400-series machines use a screen with a portrait layout that measures 4-inches on the diagonal and carries 320 x 240 pixel resolution.

When viewed straight on the screen darkens slightly when we looked at using polarized sunglasses. No screen fogging was apparent in the display at anytime.

This Garmin chartplotter fishfinder uses a small number of pushbuttons to manipulate onscreen menus that lead the user through each function. As with other 400- and 500-series units it all starts on the Home page where the user can select from six main pages, Chart, Sonar, Chart/Sonar, Where To, Information, and Configure.

The Garmin 440s can store up to 1500 waypoints and 20 routes. Waypoints are identified by choosing one of 70 symbols and using up to ten characters in the name. Creating a waypoint at present position is done with a tap of the Mark button. You can then edit, delete, select the point as MOB, or go back to the chart page. To navigate to a waypoint you select it from the chart page or waypoint list, and then actuate the Go To function. This puts data boxes up onscreen with course and distance to the waypoint, plus shows a course line to follow on the chart page.

The Information page leads the user through route building. Once there you work your way to the new route page, then simply place the cursor in the desired position and hit Select to create each point along the route. Routes can also be built on the chart page using the cursor pad and Select button.

It is a two-step procedure to initiate the man overboard function on any Garmin 400- or 500-series chartplotter. First you need to press Mark, then you must cursor to the MOB function and confirm. Once done the unit creates a waypoint, switches to the chart page if you’re not already on it, and opens data boxes giving navigation information back to the MOB position. 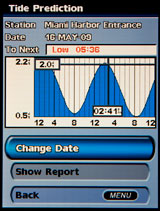 The Garmin MOB function is well intentioned and executed; we just prefer it to all happen with a single button push.

Screen redraws on the 440s are fast under most circumstances. The only time we noticed a slowdown was when we were using a Visions card in the machine or ranging long distances.

We tried both North Up and Course Up chart orientation on the Garmin and both worked very well. It responded quickly when turning in the Course Up mode.

Selecting the Where To from the Home page lets the user view locations for service, fuel, and repairs, as well as waypoint and route lists. Tides, current, and celestial data is found from the Information page. You can also access this type of date from the chart page by putting the cursor over the facility or area in question. 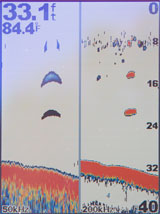 During our testing the 440s sounder marked all three of the submerged targets we placed in the water clearly even with auto gain set. Fine tuning with manual gain improved the view significantly.

Gain, depth, frequency, zoom, and A-scope can all be adjusted easily via a menu brought onscreen following a press of the menu button while the fishfinder page is displayed. This fishfinder has plenty of powerful features and worked well in all auto modes. Our testers found it easy to operate and use.

This small screen Garmin uses the same intuitive software as more expensive units. The 440s has a 1-year warranty.