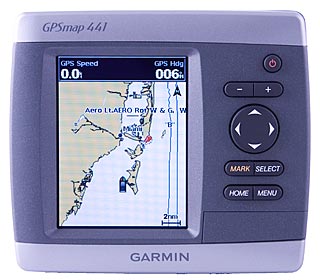 The pre-loaded chart package provides wide ranging coverage that includes both U.S. mainland coasts from Canada to Mexico as well as the Bahamas, Puerto Rico, Hawaii, Guam, and the Great Lakes. Auto Guidance and full 3D chart views are available when an optional Visions card is installed.

All of the compact Garmin 400-series chartplotters measure 5-inches high by 5.7-inches wide and just under 3-inches deep. They are available in several configurations.

The middle number in the three digit model designation identifies the cartography coverage area, 5 is UK/Australia, 4 is U.S. coastal, 3 is U.S. inland lakes, 2 is base map only.

All the latest versions in this series, designated with 4×1 model numbers, are capable of using a single Garmin BlueChart g2 Vision card, interfacing with an optional XM weather and radio receiver, and can connect to your vessels NMEA2000 network.

Our test unit, the Garmin 441, has three ports on the case back. The largest and located on the left side is the power/data cable connection, in the middle is the NMEA2000 port, and on the right is the connection for an optional external GPS sensor which can be added if needed or desired. 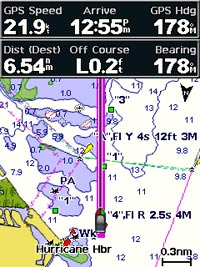 If you will be mounting this unit inside a wheelhouse or under a T-top the best performance will be attained by installing an external GPS sensor with a clear unobstructed sky view.

This Garmin GPS chartplotter can interface with other compatible marine electronics using one of its two NMEA0183 ports or via connection to a NMEA2000 network.

Either of the two NMEA0183 ports can be used to communicate with devices like a VHF radio in normal mode or be configured for the high speed data transfer rate needed to talk to an AIS unit.

All 400-series machines use a screen with a portrait layout. The 441 screen is 2.4-inches wide and 3.2-inches high which equates to a 4-inch measurement on the diagonal. It has 320 by 240 pixel resolution. The 441 has two color palettes, day and night. The night palette, which can be selected manually or automatically, swaps bright daytime colors for darker colors to enhance night viewing. Screen brightness can be set to one of 14 levels.

When viewed from straight ahead with or without polarized sunglasses the screen is bright and easy to read. However, some screen darkening was noted a extreme viewing angles. No screen fogging was apparent in the display at anytime.

The Garmin 441 GPS chartplotter uses a handful of front panel pushbuttons and a cursor control pad to manipulate onscreen menus. Our test unit was loaded with Garmin software version 3.40. Like nearly all Garmin small screen chartplotters we have reviewed lately, after a few initial setup screens, this one starts you on the Home page.

When connected to an optional sensor the 441 can display satellite weather.

From here you can select one of four main pages, Charts, Where To?, Information, and Configure. The homepage can reached anytime from any screen with a quick press of the Home key.

Your choices from the Where To? menu includes waypoints, routes, tracks, and offshore services. The latter offers a long list of important service locations like fuel, repairs, food, and more.

The Information menu provides access to tide, current, and celestial data as well as other weather data should you have the optional satellite receiver attached.

The last homepage menu choice, Configure, provides the means for you to set a plethora of system and communications preferences. These range from system settings to unit preferences like speed, heading, and position choices to communication port setup to a list of navigation, system, and weather alarms and much more.

The Garmin 441 can store up to 3000 waypoints and 100 routes with as many as 250 waypoints in each route. Waypoints are identified for the user by choosing one of 70 symbol icons and inserting a name up to ten characters in length.

Creating a waypoint at present position is done with a tap of the Mark button. You can then edit, delete, select the point as MOB, or go back to the chart page. To navigate to a waypoint you select it from the chart page or waypoint list, and then actuate the Go To function. This puts data boxes up onscreen with course and distance to the waypoint, plus shows a course line to follow on the chart page. 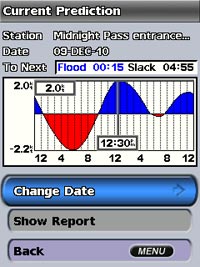 The actual predicted current speed for hundreds of inlets is all part of the pre-loaded cartography package.

Routes can be created from your present position or in another location. Menus selections starting on the Information page lead you through a route creation at another location using the chart or points from the waypoint list.

The man overboard (MOB) function on the Garmin 441 is a two-step procedure. First you need to press Mark button and then you must cursor to the MOB selection and confirm. Once done the unit creates a waypoint, switches to the chart page if you’re not already on it, and opens data boxes giving a variety of navigation data to the helmsman to track back to the MOB position. I always like one-step MOB best, but this one is adequate and useful.

Screen redraws on the 441 are fast. When ranging in or out rapidly the screen redraws were smooth and quick when using the pre-loaded chart data. We did not test the unit with an additional card in the single front panel card slot.

Buy the latest version of the 441 here.

This small screen Garmin GPS chartplotter uses the same easy-to-use software as more expensive units. The Garmin user interface has been highly rated many times and this unit holds up that tradition. The 441 is waterproof to IPX7 standards and has a 1-year warranty.