The Garmin 5208 front panel offers a sleek look with only a single power button on the bezel. Everything else in this marine chartplotter is controlled via touch screen fields serving as pushbuttons, alphanumeric keys, or prompts.

Like its siblings, the 5208 will display radar information, fish finder data from an associated black box sounder, and graphic weather when connected to an XM receiver. 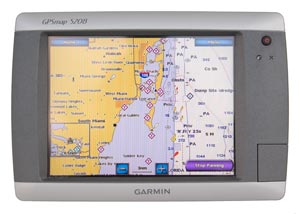 It can also show AIS info, a video input, and some NMEA 2000 data, as well as connect to NMEA 0183 devices all through dedicated connectors on the back of the display.

Power is supplied through a twist lock connection on the back too. The Garmin 5208 has an IPX7 waterproof rating, meaning it could withstand submersion to a depth of 1 meter for 30 minutes.

This unit comes preloaded with Garmin Bluechart g2 U.S. coastal cartography and will support Bluechart g2 Visions chart cards. Using a Bluechart Visions in the 5208 would add 3D views both above and below the water surface as well as extensive satellite and aerial photo coverage.

The Garmin 5208 is a relatively large marine chartplotter and requires a fair amount of panel space. It measures 10.1 inches wide, 6.8 inches high, and 4.2 inches deep. The display screen is 6.7 inches wide by 5 inches high and measures 8.4 inches on the diagonal. Resolution is a very respectable 640 x 480.

The screen on the Garmin 5208 was bright and sharp; we rated it excellent for daylight viewing. We noticed little to no screen darkening when looked at the screen from severe side angles. When we put on our polarized sunglasses the screen looked good from straight in front, but at severe side angles we experienced moderate darkening. No screen fogging was noted at anytime during our review.

To enhance low light viewing the screen on the 5208 can be set to dim and change color palette automatically. We tried the auto dimming system as well as operated it manually and found both worked well. Darker coloration is used in the night color palette to improve nighttime viewability. We rated the 5208 good for night viewability.

On occasion the number of steps needed to complete a task on the 5208 seemed excessive to us. For example, if you were operating with a full screen navigation chart displayed youd have to return to the Home page then hit Mark to save a waypoint at the present position. According to Garmin Communications Manager, Ted Gartner, a new software update will place a Mark/MOB field on every page to make creating a waypoint a one button process.

Navigating to waypoints displayed onscreen is easy; you just put your finger on the point. Doing so will bring up a menu with the Navigate To selection, press it, then press Go To to begin navigating to the waypoint. You can use the same technique to navigate to the cursor position or a selected marker.

Routes can be constructed by placing your finger onscreen where youd like to locate the first waypoint. Pressing the Add Turn field will allow the addition of another leg. When youre finished adding points you press the Done field to complete the route.

Data entry on the 5208 is a breeze using the full alphanumeric keyboard. Its not a keypad, as every letter and number has its own large pushbutton displayed onscreen. We think this is the best data entry system weve seen on any marine chartplotter weve tested. The 5208 has one chart card slot, and can store up to 1500 waypoints and 20 routes. Waypoint names are restricted to only 10 character names and no additional comment. Wed like to see longer names allowed.

Screen redraws on the 5208 can be a bit slow under certain circumstances. If you pan or range the chart a long distance it can take up to 5 or so seconds to redraw all data. This unit automatically varies the amount of data displayed onscreen depending on the range setting. The user can set the amount of data to be displayed at any one of five levels.

See our review of the wireless Garmin RF Remote This unit is designed to operate the 5208 from as far as 30 feet away.

We like this mid-sized marine chartplotter. The 5208 has a large screen, touch screen interface, pre-loaded charts, and wide ranging capabilities. The package includes a GPS sensor.