The compact 500-series chartplotters from Garmin can be purchased in a wide variety of configurations. All the 500-series machines have a 5-inch screen, unit designations ending with the number 5, like our 545s test unit, have 480 x 640 screen resolution. 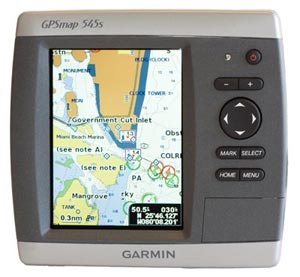 The Garmin 545s combines a high resolution screen with preloaded cartography and a 1000-watt sounder.

The middle number in the model designation indicates the type of cartography, 5 is UK/Australia, 4 is US coastal, 3 is US inland lakes, 2 is base map only. All are capable of using Garmin BlueChart g2 Vision cards.

We mounted the Garmin 545s using the supplied bracket. Power and NMEA 0183 data pass through a single cable that fastens to the case back with a twist lock connector. An additional leg on this cable connects the supplied transom-mount transducer.

We rated day viewability on the high resolution Garmin display screen excellent. Though it was not quite as bright as the brightest screens weve tested in this size unit, details are sharp and clearly readable. When viewed straight on the screen darkens slightly when we looked at using polarized sunglasses. No screen fogging was apparent in the display at anytime. 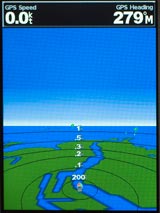 Garmin mariner’s eye view can be displayed on the 545s.

The 545s has two color palettes, day and night. The night palette uses darker coloration to enhance night viewing. This unit also has an automatic backlight control system that uses a sensor on the front of the display. We tried it and found it worked very well at matching the backlighting to the outside light level. We rated the 545s excellent for night viewability.

With a limited number of pushbuttons, onscreen menus lead the user through most functions on this Garmin unit. It all starts from the home page where the user can select from six main pages, Chart, Sonar, Chart/Sonar, Where To, Information, and Configure.

To create a waypoint at the boats present position you hit the Mark button. The unit then shows you a menu to edit, delete, select the point as MOB, or go back to the chart page.

To navigate to a waypoint you first select it from the chart or off a waypoint list, then select the Go To function. This puts data boxes up with course and distance to the point, plus shows a course line to follow on the chart page.

We found the easiest way to build a route was through the Information page. Once there you work your way to the new route page, then simply place the cursor in the desired position and hit Select to create each point along the route. Routes can also be built from present position using the cursor pad and Select button. 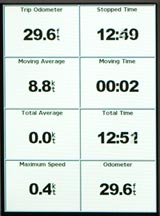 Garmin 545s data blocks were easy to read from a distance.

It is a two-step procedure to initiate the man overboard function on the Garmin. First you press Mark, then you must cursor to the MOB function and confirm. After you do this the unit creates a waypoint, switches to the chart page if youre not already on it, and opens data boxes giving navigation information back to the MOB position.

The Garmin MOB function is good, but would be much better if it were activated with a single button push. Garmins Senior Communications Manager, Ted Gartner, told us they will be improving the MOB function in a future software update to make a second press of the Mark button activate MOB. Nevertheless, according to Gartner, the position is captured the first time the button is pushed so theres no delay in getting the right location locked into the machine.

Screen redraws on the 545s are fast under most circumstances and only slowed noticeably when we built a route that required map range changes too. When we simply ranged the chart over a long distance all onscreen data updates almost instantaneously.

We tried both North Up and Course Up chart orientation on the Garmin and both worked very well. It responded quickly when turning in the Course Up mode.

The Garmin 545s can store up to 1500 waypoints and 20 routes. Waypoints are identified by choosing one of 70 symbols and using up to ten characters in the name.

Selecting the Where To page from the Home page lets the user view locations for service, fuel, and repairs, as well as waypoint and route lists. Tides, current, and celestial data is found from the Information page. All this information can also be accessed by putting the cursor over an area on the chart page. 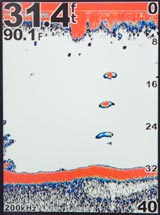 The Garmin 545s sounder performed well in our tests. The three “fish” are actually ping pong balls suspended in the water column.

When it is fitted with an appropriate transducer the 545s is capable of up to 1000 watts of output power from the sonar. For our testing we used a 50/200 kHz transom mount unit that limited the sounder output to 500 watts.

After choosing Sonar from the Home page menu, you can select how to display the sounder data. Options include full page sonar, a split frequency page, or split zoom. You can also choose various sounder setup options. It has all the features youd want in a fishfinder including A-scope and bottom lock. The only thing it lacks is a shift function.

During our testing it marked all three of the submerged targets we placed in the water clearly even with auto gain set. Fine tuning with manual gain improved the view slightly.

Commonly changed sounder settings like gain, depth, frequency, zoom, and A-scope can all be found on the sounder setup page by pressing the menu button. In our opinion this fishfinder has plenty of features, was easy to operate, and worked well in all auto modes.

We rated the Garmin 545s sounder good for presentation and excellent for ease of use.

Razor sharp screen details and high ratings for ease of operation combine with good sounder ratings to make this Garmin chartplotter fishfinder an excellent choice for your boat. The 545s has a 1-year warranty.