How Does A Fish Finder Work

Fish finders are complicated but common devices that many anglers have heard about and may even have, but never fully understand how one actually operates. Many anglers don’t even understand the basics of how one of these machines works. The individual parts each have very important jobs, and the science behind ‘Angler’s best friend’ is extremely intriguing once you learn how everything functions. It may seem like something that’s beside the point, but knowing how a fish finder operates, functions, the technology behind it, and what every component does can help you become a much more advanced angler in the long run. Even though you don’t need to become a scientist in order to be able to catch tons of bass, but even just understanding the basics and mechanics of how a fish finder operates can help you greatly. Even with the best fish finder in the world, without sufficient knowledge on what a fish finder actually does, you won’t be able to fully utilize your fish finder.

Parts of a Fish Finder 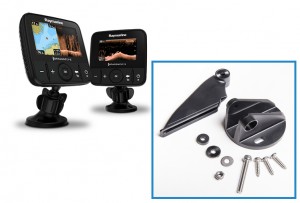 The first thing you need to know about a fish finder is that these gadgets are made up of several key components.

The transducer and display are the two major parts of a fish finder, but the power cord and display mount are two more important components. 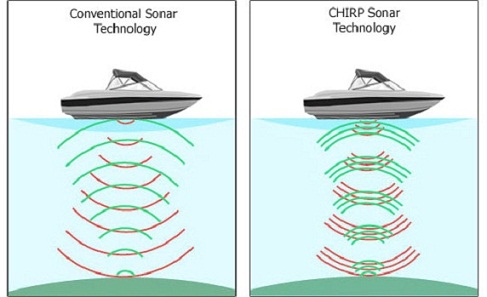 The integral component of the fish finder is again, the transducer. Transducers don’t just magically view the bottom of the ocean and return these results, but rather utilize complex mechanics to send out sonar waves and the same techniques to read them once the bounce back. Sonar waves can be thought of as a noise, like a clap or a shout. This noise has the ability to travel through the ocean, and bounces back once it comes in contact with any object. The word transducer actually just describes anything that converts energy from one form to another.

In a fish finder transducer, first DC electricity is converted to AC, and then electrical energy is converted into sound energy (sonar waves). The transducer converts electricity into noise via tiny crystals. These piezoelectric crystals are very specifically shaped, and are actually grown in large labs. Ferroelectric where developed in Japan, around the same time where radars were becoming used for commercial applications. Cultured crystals are usually made out of either barium titanate or lead zirconatetitanate, as years of research have shown that these are the most efficient at converting electricity into sound. When exposed to electric currents, the crystals will grow or contract.

The reason alternate current is used rather than direct current is so that the crystals will rapidly expand and contract, vibrate, and ultimately produce sound. Once these sound waves return, the crystals vibrate again. The transducer computes how long it took the sonar waves to travel in order to determine the distance, and then sends this information to the fish finder’s display for it to be interpreted as visual data. Essentially, if your transducer has a problem with its crystals, than you won’t get good results.

Fish finders are very complicated, and there are a lot of big words used that describe the function of a fish finder and its components. Don’t be discouraged – using a fish finder is much simpler than knowing how to build one. It’s a good idea to at least familiarize yourself with how one of these devices work. It might sound like something a chemical engineer would have trouble understanding, but it can be simplified – all you need to know is that the transducer contains crystals, these crystals vibrate when shocked, and these vibrations create sound. The display shows us what we need to see, and we can catch more fish because of it. The reason you need to know these things is because while you are installing your fish finder, you need to know the basics of how it operates, and you’ll need to know how it operates in order to use it to the max.