How to Effectively Use a Fishfinder to Catch More Fish

For millennia, fishermen have relied on a combination of instinct and local knowledge in order to catch fish. Fish are, after all, simple creatures which tend to obey certain rules. Most fish like to live in places where they have cover from predators yet are still able to seek out prey. Specific species prefer specific water conditions and are thus more likely to be found where water is deep, or swift flowing or a certain temperature. However, this technique is imperfect. By understanding fish habits and local water conditions, all a fisherman can do is increase the odds that he will find fish at a particular location. Short of going overboard to look, there has, historically, been no way to be certain that fish are actually in any particular spot. And going overboard is every bit as impractical is it is likely to scare fish away.

This changed in the 1950s with the development of commercial sonar devices. Sonar had originally been developed as a means of detecting submarines, as well as enabling submerged vessels to navigate. Commercial fishermen quickly discovered that sonar could also help them find large schools of fish which they could net, and over time technological advances and miniaturization enabled the development of small units which can be mounted on almost any craft, or even deployed independently. This enables fishermen to see what is beneath them in almost real time, allowing them to spot even small, single fish and attempt to capture them. With units going down in price, they have begun to border on being essential, especially for busy fishermen who can’t spend the whole day going from likely spot to likely spot in search of fish. 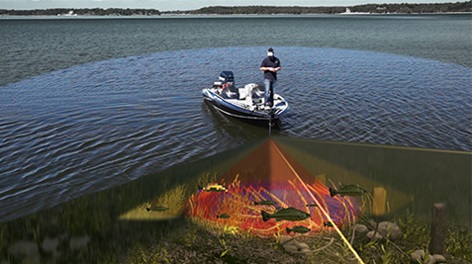 Fishfinders work on the same scientific principals as any sonar device, i.e. they produce a sound (a “ping”) and then listen to the echo, which lets the machine know how far away an object is. By using a large number of very direct pings, a fishfinder can determine accurately not only whether or not there appear to be fish present, but whether or not there are underwater obstructions, debris, or other objects the fish are hiding in/under. Some of the more advanced, high-resolution units can produce approximate pictures of what is beneath the surface, but due to the shape and highly mobile nature of fish, they can only be represented by an icon, or the arc produced as a sonar sensor passes over them. Still, this enables fishermen to gauge where fish are, and even get a good idea of how large they are.

The best way to use a fishfinder is not to expect it to magically find fish within the vastness of a lake, but instead to help fishermen eliminate places where fish aren’t, as well as find new places where fish like to hide. Fishfinders work best when deployed in areas where fish have been historically, or where their biology and habits dictates they are likely to appear. The goal of a fishfinder, then, is to help fishermen avoid wasting their time by tossing out their lines in places where fish aren’t. By going across a lake and scanning it carefully, a fisherman can eliminate spaces that are not worth their time, as well as get an idea of what’s going on beneath them. Schools of small fish can be eliminated, and large individual fish pursued. Fishermen can also eliminate fish which appear to be under local limits or are otherwise not worth their time.

In order to use a fishfinder to catch more fish, it is important to use it to scan a wide area and to use it to check out numerous hiding places within a lake in the pursuit of fish. Thanks to the ability of the fishfinder to examine the water underneath a boat as it passes, fishermen are best served by the device when they move from location to location, examining the results and looking for places where multiple fish appear to be congregating. By eliminating places were fish are not hiding and observing how fish tend to move around a lake or river during the course of a day, fishermen can determine where to best put their lines, and also see in real time the effect of their bait or lure on a fish. If a fish doesn’t move in response to what’s being offered, a quick bait or lure change may improve the situation. Additionally, a fishfinder will let a fisherman know if he has exhausted a particular spot, or if fish have moved to a new location. Therefore, by beginning with broad searches and then focusing on the individual fish detected, a fisherman using a fishfinder can catch more fish, more quickly, and with less hassle than one relying on instinct alone.