How To Install a Fishfinder on a Boat

A fishfinder is an essential piece of kit for any dedicated fisherman. Not only does it save time by enabling fishermen to avoid casting a line where there’s nothing to catch, but it also helps fishermen find new, better places to fish, as well as avoid underwater hazards. However, they are not yet so common as to come pre-installed on most modern fishing craft, and so it is necessary to install one after purchase before it can be used. So what’s the best way to install a fishfinder?

As with most accessories, the type of installation depends on both the boat and the device to be installed. A small craft may be able to simply bolt the fishfinder to the side and throw the transducer overboard, while a larger vessel may require a permanent installation. Additionally, some fishfinders require a permanently installed transducer placed on a specific part of the boat, while others require only that the transducer is overboard. As such, it’s best to understand what sort of fishfinder is best for your boat and approach it from that perspective. 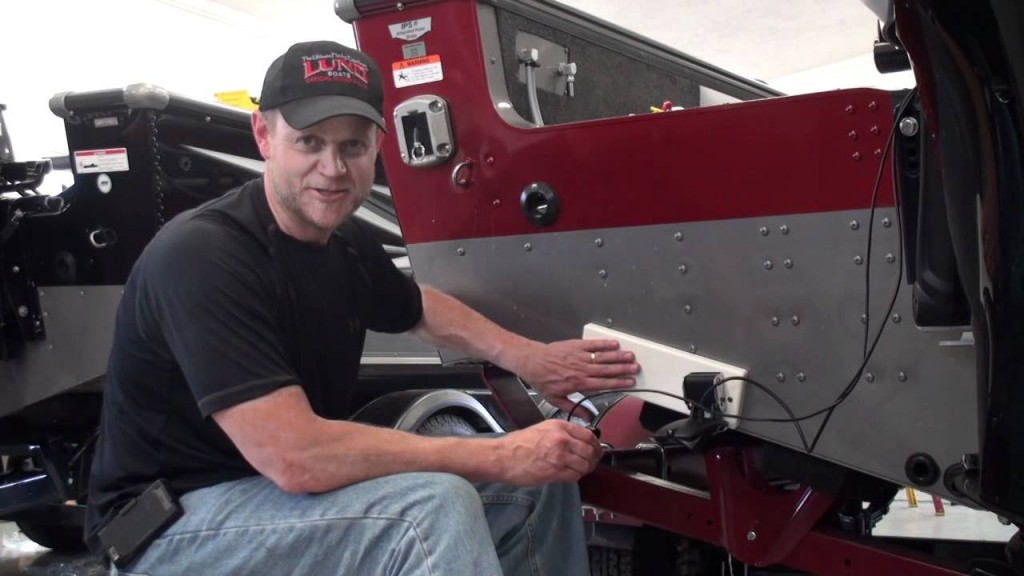 Small fishing craft, especially bass boats and other small, shallow draft vessels, generally have the easiest installation. Those with a console have a mounting point at the console for accessories, and may even have a hole through the console for dropping in the transducer or permanently securing it to the bottom of the boat. Otherwise, most fishfinders have a cord for the transducer of sufficient length for it to hang overboard and below the craft to get a good signal. These fishfinders usually require little more than a few bolts to be fixed to mounting points to install them and make good options for craft that are rented, stored outside in all weather conditions, or other situations where a fisherman may want to take his fishfinder home with him each day.

Such semi-portable fishfinders don’t offer the high resolution or live display of a permanent installation. This is because, since they are dangling off the side, they can’t be expected to remain in their proper position when the boat is in motion, nor can the computer attached to them reliably determine where the transducerer is about the boat. Therefore, even on small craft, it is often necessary to conduct a permanent installation. It is important before doing such an installation to ensure that the craft is capable of handling such an installation and that it won’t cause problems for the craft, especially regarding putting holes into or stress onto the hull that may cause permanent damage. Additionally, the position of the transducer is important both for getting an accurate signal and for ensuring it is not damaged when the boat is placed in and removed from the water.

Fortunately, most modern fishing boats have dedicated mounting points, or even mounting holes, for transducers due to their popularity. This eliminates the need to drill holes in the boat, or to attempt to secure the transducer with an adhesive. In the event, such an installation was not engineered for, be certain to talk to the manufacturer about the best way to install a transducer. Ideally, the hull should remain intact, with the transducer wire traveling over the exterior of the boat rather than through it, but there may be ways to route the wire through pre-determined holes. Most boats produced in recent decades include, in their manual, instructions for how to install a transducer permanently on the craft. Failing that, the manufacturer of the fishfinder itself may be able to help since they have doubtless faced the problem before.

When dealing with larger craft, especially those designed for open water and that have an enclosed cabin, installing a transducer is usually more complicated. While some over-the-side transducer designs can still be used, the low resolution and shallow depth of such units are usually insufficient, especially when trawling or deep sea fishing. Instead, a larger more powerful unit must be used, and this requires a permanent installation. Fortunately, the companies which produce both the fishfinders and the boats are aware of this and have taken steps to make things as easy as possible.

In some cases, it may be possible for a fishfinder to be integrated into an existing sonar system. The low cost of modern sonar systems means that they are often included in larger craft since they are useful for preventing accidents and damage to the boat. In such a case, a fishfinder can make use of the transducer data to find fish and other smaller objects that the boat’s built-in hazard detection would not find. This eliminates the need to install a specialized transducer, as well as the need to mount it.

However, most fishfinders require the use of their transducer, and in a larger craft, this usually necessitates that the boat is removed from the water for the transducer to be installed. This requires a professional, who must drill through the hull and install the appropriate wires. In the event a fisherman wishes to do this himself, it is very important to speak to both the manufacturer of the boat and the fishfinder first, to ensure that no mistakes are made, nor that the installation creates a leak or weakness in the hull. Some boats are now being engineered with a specific mounting point for transducers to eliminate most of this problem.

Recognizing the difficulty inherent in such installation, many manufacturers are now offering exterior installations, with the transducer’s wires remaining external to the boat’s hull at all times. While this still may necessitate some drilling to permanently adhere the transducer, in many cases it can be permanently emplaced using an adhesive, with the wire run along the side of the boat and into the cabin. In such an installation, it is important to ensure that the wire is permanently installed as well as the transducer, to prevent it from becoming detached or damaged while the boat is in motion.