How to Install a Transducer

By following the how to install a transducer instructions provided here you should be able to turn what many consider a difficult task into an easy straightforward transom mount transducer installation.

Locate and Mount the Transducer Properly

First off, you will want to position the transducer on the transom in a spot that will have contact with the water at all times but not interfere with cooling water flow to an outboard engine. On a boat with twin engines, like our 25-foot Grady White, this ends up being somewhere right near the hull centerline. In this case, I mounted the transducer slightly left of center due to a drain hole mounted right on the hull centerline. 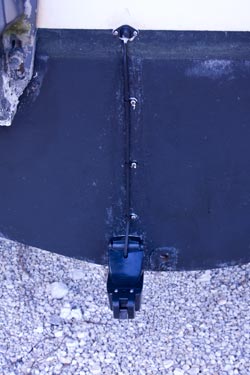 Here is the Airmar P66 mounted to the transom on the Grady White 25-footer.

The bottom of the transducer needs to sit about one-sixteenth of an inch below the extended waterline of the hull. This will assure the transducer will remain in clean bubble free water even when the boat is on plane yet not be so deep that the transducer throws a rooster tail of water behind the boat when at speed.

The actual mounting method depends on the transducer itself but many will mount in a similar fashion to the Airmar P66 I mounted for this application. On the P66 the mounting bracket is slotted to allow for easy vertical adjustment. Three screws are used to hold the unit to the transom of the boat. The bracket and transducer snap together on two pins that allow the transducer to swing up should it contact an object at speed.

How to Install a Transducer—Drilling the Transom

On most fiberglass boats the transom to bottom joint where you will be mounting is heavily constructed and can easily handle the holes you will need to drill for the transducer without breaking the water tight seal. Even if you drill all the way through the transom dont sweat it, just make sure you use a good below the waterline sealer, like 3M 5200 on the screws. Mark and drill the mounting holes in the transom then test fit each screw before you try to mount the transducer. The hole will need to be big enough to allow the screw to thread into the hole without excessive force otherwise you may snap off a screw in the hole. That is never good. Remember the stainless steel screws you must use on a boat are a bit softer and weaker than regular steel screws. Only use top grade stainless steel screws.

How to Install a Transducer—Dealing with Deadrise

Since this unit was mounted on a hull with significant deadrise you will need to assure the full width of the transducer bottom sits at least one-sixteenth of an inch down, this might mean that one side is at a sixteenth and the other is at three-quarters of an inch. If you set the transducer too shallow you will lose the signal at when on plane at high speed or it you set it too deep you will throw a huge rooster tail of water behind the boat when planning. Neither is good, you need to set the height just right to achieve top notch results.

How to Install a Transducer—Routing the Cable

Once the cable has been routed through the transom you will need to find a way to route it toward the area where the display will be mounted. It will also need to be secured to the transom as shown in the accompanying photo as well as have the cut through hole sealed and capped. Usually all this hardware is provided with the transducer.

Routing the cable forward to a center console can usually be done by passing the cable through the rigging tube that carries engine controls and wiring. Many times these tubes can be stuffed full of wires, cables, and hoses leaving little room to pass a large terminal end. Try it though before you cut the transducer cable. If you dont have an old cable to use as a pull wire you will need to route an electricians snake through the rigging tube first.

How to Install a Transducer—Cutting the Transducer Cable

On my installation I had no choice but to cut the transducer cable. There was simply no way to route the large terminal end through the jumble of stuff already in the rigging tube. I cut off the molded end and left about 18-inches of wire attached so I could reattach all the wires again later. With the end removed I used electrical tape to attach the new cable to an old cable in the rigging tube. I lubed up the cable with liquid soap to make things slide through easier then I pulled the new transducer cable through the tube and into the console. From here it was an easy push though into the back of the electronics box.

How to Install a Transducer—Reconnecting the Cable

The Airmar P66 transducer cable had six insulated conductors and a single un-insulated conductor inside an outer shield. To reconnect all the wires I paired them by color, twisted each pair together by hand, and then added a small drop of solder to each joint to lock things together. Each wire pair was then sealed up with a piece of adhesive lined shrink wrap tubing. When the tubing was heated and shrunk I pinched the open end with pliers to form a seal. All these wires were then secured to the electronics box aft bulkhead.

Installing a transom mounted transducer is not that complicated and can be done properly by anyone with basic mechanical abilities and the right tools. Installation instructions provided with your transducer will have specific information about that unit you should read and follow.