The Humminbird 788ci is our first product review from this well-known marine electronics company. This one is a chartplotter fishfinder combo featuring a high-resolution 5-inch display screen, internal 50-channel GPS receiver, and a built-in 500-watt sounder.

All the other units in the 700-series lineup feature a 5-inch display screen. The sonar-only 718 and 728 use grayscale screens with the latter model having increased resolution. An optional GPS sensor turns either of this pair of fishfinders into chartplotter combo units.

Our internal GPS equipped 788ci is next in line. At the pinnacle of the 700-series group is the 798c SI, this one uses the same high-resolution screen as the 788, an external GPS sensor, and has side scanning sonar capability.

For my review I mounted the display unit using accompanying bracket. This bracket is designed to be quick-release so you can remove the display for safe storage off the boat with the push of a single button. It will also rotate and tilt to optimize the viewing angle. Flush mounting this display unit in a panel requires the purchase of an optional kit.

The back panel of the display unit has four connectors, one for the transducer, another for the power cable, a third for an accessory bus designed to interface with an optional weather receiver or Smartcast sensor, the fourth connector will allow you to update the 788ci software using a PC. Interfacing the 788ci with an NMEA 0183 device requires the purchase of an optional cable.

The display has a front panel footprint that measures approximately 6.8-inches wide and 5.4-inches high. Overall depth is 3.8-inches. The two SD cards slots on the front panel are protect by a gasketed cover. The 788ci only has world base map installed so I used an optional Navionics chart card during my testing.

The 788ci screen uses square layout that measures 3.5-inches on both height and width. This yields a 5-inch screen size when measured on the diagonal with a very respectable pixel count of 640 by 640.

In daylight conditions I found the 788ci screen to be bright and sharp with little to no reflectivity evident. As expected it darkens slightly when viewed through polarized sunglasses. It was very readable even from steep side angles with or without my polarized sunglasses in place. Overall this high-resolution screen show some very fine detail that because of the screen size must be viewed from fairly close up. I rated the Humminbird excellent for daytime viewability. No screen fogging was apparent in the display at anytime during our review.

To change the screen brightness you’d give a quick press to the on/off button. This bring up a graphic with a 10-position light slider, you’d adjust it as needed with the cursor pad arrows. You’ll likely need to use the darker colors for night viewing as the brightness control does not goes as dim as wed like. I rated the 788ci good for night viewability.

This Humminbird 788ci is operated using 12-pushbuttons and a 4-way cursor control pad. Individual page views are preset and selected by the user to be visible or not. 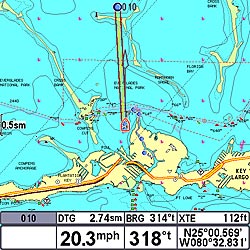 The full screen chart view shows lots of detail and has plenty of navigation data displayed both graphically and numerically in data boxes.

There are six main sounder views, more if you add optional gear, a few diagnostic views, and three chart views.

The chart views include a very detailed 2D chart page, a Bird’s Eye view page that gives the appearance of 3D, and a combo chart/sounder page.

Sounder views include a full screen view, dual frequency, split screen zoom, full screen with big digit data overlay, and flasher. You can make any page visible or not as you see fit.

Three user selectable View Preset keys are located in a row just above the power switch. These can be set to display three different favorite page views for instant recall so you don’t have to page through the full list of pages using the View or Exit keys.

Creating and navigating to a waypoint is simple. You’d put the cursor over the place you want to go, press Mark, then press GoTo. This creates the waypoint, names it, draws a course line to the point, and shows you tons of navigation data in data boxes at the bottom of the screen.

All you need to do to navigate to a saved waypoint displayed onscreen is to place the cursor over it, hit the GoTo button, and navigation begins. To stop navigation you press Menu and select Cancel Navigation. I sure would like to see a restart navigation function added to the list of options.

To modify a waypoint you’d cursor to it, press Menu, select the point from a short list of items, and then choose Edit. From the Edit page you can change the machine generated number to an alphanumeric name up to 11 characters long. You can choose from a variety of onscreen icons here too and adjust the position data if needed. The Humminbird 788ci can store up to 3000 user waypoints.

The only way to create a route in the 788ci is via the Routes menu. From here you name the route, then select waypoints, order them as desired, and save the new route. Various menu options let you review the route information, travel the route forward or in reverse, and move or skip a waypoint. The Humminbird 788ci will store up to 50 routes.

The man overboard function in this Humminbird combo can only be described as excellent. With a single button push the unit marks the MOB position with a distinctive icon, switches to the full screen chart view no matter what view was onscreen, stops all other navigation, starts navigation to the MOB point, displays the MOB position data and time since activation in a red outlined box, shows digital navigation data and a graphic bearing line back to the MOB point, and draws range rings around the point. This is simply the best version of this function Ive seen. 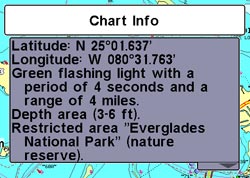 Placing the cursor over an object and then pressing the Check key will bring up chart information.

The Humminbird 788ci has a search function that allows you to place a search grid pattern, either square or circular, over a single waypoint. This could really come in handy for searching out bottom structure or a wreck where you only have approximate position information.

Even with a chart card installed and lots of detail displayed onscreen redraws on the Humminbird 788ci were fast and smooth.

The 788ci chart page can be orientated to North Up or Course Up modes. At sea it responded well in both settings.

The Check button will display whatever information is available for the area covered by the cursor cross. If you place is out in open water somewhere only latitude and longitude information will be displayed. Put is over a tide station and youll get lat/long numbers and a graphical tide display. The same holds for navigational markers and lights.

The Humminbird 788ci is rated waterproof to IPX7 standards, which means it could be submerged to a depth of 1-meter for up to 30 minutes and survive undamaged. The unit carries a 1-year warranty.

The Humminbird 788ci combo is capable of producing up to 500 watts of output power from its integral sonar. For my testing, I used the supplied 83/200 kHz transom mount transducer. 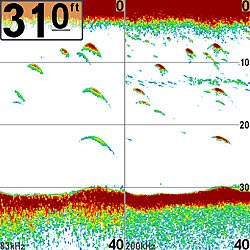 After playing around with the gain the 788ci marked all three test targets with both high and low frequencies. It also clearly painted a thermocline.

On the full screen sounder view you can display A-scope, RTS in Humminbird parlance, in two different modes.

Zoom can be set to 2x, 4x, 6x, or 8x. Bottom lock is selected from the zoom menu and once turned on you can adjust the bottom range from 10 to 60 feet.

When in the dual frequency mode, gain, or sensitivity in Humminbird lingo, will change both frequencies simultaneously. You cannot adjust each frequency separately.

Commonly changed sounder settings for each preset page are brought up in a menu with your first press of the Menu button. Here you’ll find things like sensitivity, depth, chart speed, and sonar colors. A second press of the Menu button brings up the main menu where you’ll find the sonar menu. From here you can change or adjust a myriad of settings including the transducer frequency, surface clutter, Fish ID, RTS, Whiteline, zoom width, and SwitchFire mode.

That last one, SwitchFire is a Humminbird exclusive designed to clean up the screen view in shallow water. In depths over about 10 feet you’d leave this set to max mode but in shallow water setting it to clear mode automatically reduces the unit sensitivity and cleans up the view.

One feature you don’t often see on a sounder these days is the ability to record and playback images, but this unit will do just that when you have a blank SD memory card installed.

More sonar settings will be available should you choose to set the main menu user setting from normal to advanced. In the advanced mode you effectively have a shift function with this sounder by adjust the upper and lower depth ranges as you see fit. You’ll also find a sensitivity offset option that gives you a way to adjust gain separately for each frequency.

In my opinion this fishfinder has plenty of features, was easy to operate, and worked well presenting bottom, fish and test targets during our review. I rated the Humminbird 788ci sounder excellent for presentation and good for ease of use.

A bright sharp display screen with lots of pixels combined with a very nice sonar package make the Humminbird 788ci a desirable chartplotter fishfinder combo for any boater looking to upgrade their marine electronics gear.