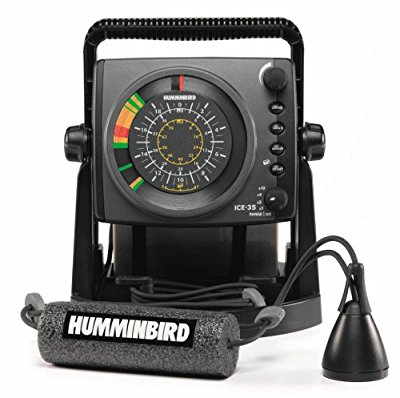 I am an ice fisherman, and the gear I use is very important for achieving success in this activity. In the past, we ice fishermen would have been unable to see beneath the surface of the ice; now, however, we have a technology that does the “seeing” for us. This technology is the fish finder, an incredible device that uses sonar to pinpoint the location, size and trajectory of fish, and map the underwater topography of a body of water. There are actually fish finders adapted specifically to ice fishing, an activity that, of course, has its own fairly specific requirements. Among those fish finders specifically adapted to ice fishing, flashers are some of the most popular. (The term “flasher” describes the display method.) Recently, as I got more interested in ice fishing, I decided that a flasher would be extremely useful to me. I had seen other fishermen using them and even tried out my friend’s flasher, and my initial experience was very positive. I wanted to improve my catch, so I was compelled to look into it a bit more.

The flasher that my friend used was the Humminbird ICE-35 Three Color Flasher. After reading lots of reviews online, and doing a great deal of research overall, I decided that the ICE-35 would probably be the best choice for me. In addition to my already having used and liked it, online reviews of the ICE-35 by fellow fishermen showed that it seemed to best fit my needs of any product out there. I purchased the ICE-35 three years ago, and have used it for three seasons of ice fishing, so I’d say I have a pretty good sense of its functionality. I’ll start by saying that there’s a reason it’s so popular. I’ll share some of the pros with you.

For a start, the ICE-35 is a fairly inexpensive and very effective flasher. It’s one of the best products in its price range, in my opinion. One of the positive features of the ICE-35 is that it allows you to zoom, which some other products in the same price range cannot do. I found that to be extremely useful. Another is that its screen is fairly large, which makes it easier and more convenient to see and use. The interface is very clear and easy to use and get the hang of–it’s intuitive, and fine for the first-time fish finder owner/user (like I was). The buttons and dials just make sense, so it took me very little time to comprehend. It’s waterproof, and has surprisingly great battery life so that it lasts a while between charges. In fact, I barely had to charge it at all during the course of a season.

Furthermore, the ICE-35’s dual beam capability is very useful. It can read depths of up to 200 feet, which impressed me. Its demo mode helped me learn to use it before going out onto the ice, so that once I got out there I wasn’t wasting time trying to figure out how to use the flasher for the first time (that would be a hassle). As I said, I’ve been using it for three years now; it’s still in good condition and I predict it will last for at least several seasons more. It weighs about 12 pounds and measures 13.5 x 12.3 x 8.1 inches, so it’s easy to transport, which is pretty important to me.

The ICE-35 does have several cons. When I got it, I had to assemble it out of the box, but it’s an extremely easy assembly process–it took me about half an hour. The assembly information comes on a DVD, which I found slightly inconvenient, because I prefer reading a paper manual to reading instructions off of my computer. Also, the ICE-35’s stand tends to wobble. It doesn’t come with its own carrying bag, so you have to spend extra for that (I did after the first year, just to make things easier). I also thought that the transducer has too many cords, so that it’s somewhat messy to deal with; in my experience, the transducer’s foam float can get in the way. Lastly, the ICE-35 was a little bit noisy compared to some of my friend’s fish finders of other brands, which was occasionally bothersome–I got used to it, though, and I don’t really notice the sound anymore.

I would recommend the Humminbird ICE-35 Three Color Flasher to any ice fisherman looking for a product that will fit their budget while offering a fairly large range of features. Its price is not prohibitive, but it has allowed me to really get a sense of the fish beneath the ice. Overall, the ICE-35 possesses a range of useful features, including but not limited to: dual frequency sonar, 200-foot depth capability, zoom, and overall ease of use. It’s completely worth the price.