The Lowrance Elite-5 DSI is a combination chartplotter fishfinder that couples a bright 5-inch display screen, 16-channel GPS with internal antenna, onboard U.S. inland and coastal cartography and DownScan Imaging™sounder into a single unit.

The Elite-5 DSI package ships with the display unit, a quick-release mounting bracket, a DSI transom-mount high-speed skimmer transducer, an operation manual, and installation instructions. This unit can also be purchased as a standalone fishfinder and as such is designated the Lowrance Elite-5x DSI. 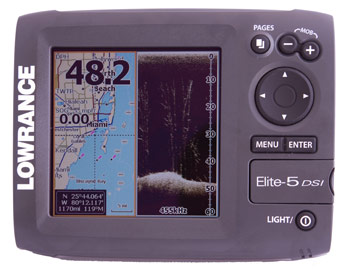 I used the accompanying tilt and swivel bracket to mount the Lowrance Elite-5 DSI to our test rig.

Flush mounting the display is easily accommodated by using the threaded bushings in the case back. A properly dimensioned flush mount cutout template is supplied as well.

A single cable that fastens to the case back with a twist-lock connector supplies power and data from the transducer through individual cable legs. The display features an internal GPS sensor, but can use an optional external GPS sensor if needed or desired. I used the internal antenna for this review. NMEA 0183 can be supplied to a VHF radio or autopilot through an optional cable. The Elite-5 DSI has a single microSD™ chart card slot and can use Navionics cartography.

The Lowrance Elite-5 DSI is fitted with a square display screen that measures 3.6-inches on each side and 5-inches on the diagonal. It supports 480 by 480 pixels of resolution.

The Lowrance Elite-5 DSI screen is bright, sharp, and easy to read. It shows good chart detail using the onboard cartography. When viewed from straight in front and out to moderate side angles the screen maintains its brightness and clarity. At extreme side angles the screen is difficult to read. I rated this Lowrance chartplotter fishfinder screen excellent for daylight viewability. No screen fogging was apparent in the display at anytime.

The Elite-5 DSI has two palettes, day and night. On the Chart view night palette makes map features, numbers, and letters slightly darker for easier night viewing. On the DownScan Imaging view, when set to the default sepia tone, you will see a black and white photo-like image for daylight operations and bright green over black background for night use. Screen brightness is adjusted one of eleven levels using the keypad and Light button. Continuous presses of the Light button will change the screen brightness to one of four preset levels.

The Lowrance Elite-5 DSI chartplotter fishfinder provides six front panel pushbuttons and keypad controller to accommodate user inputs. Page selection is accomplished using a graphic menu which displays four screens. The main pages are: Steer, DownScan Imaging, Chart, and a combo screen with the chart view and DSI. I liked the slick appearance and usefulness of the page selection interface. On page views where there are two windows shown a double press of the Pages button switches control from one to the other. 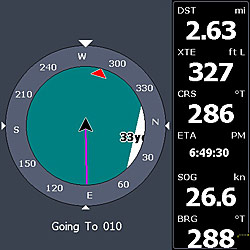 This is the Steer page with multiple navigation data boxes displayed.

Menus related to the page displayed are available with a single press of the Menu button, a second press takes you to the main menu. The unit lacks an Exit key so operating the menu system took a practice. There are times when in the menu system where exiting requires moving the cursor to a close field and pressing the Enter button, that is a bit counterintuitive in my opinion. Most times several presses of the Menu button will get you out of the menu system.

Creating a present position waypoint or waypoint at the cursor cross is easily done from a chart view with a double press of the Enter button. You can accomplish the same thing by pressing the Menu button, selecting new waypoint, and then pressing Enter. A new waypoint dialog box will open and allow you to save point with another press of the Enter key. To edit the waypoint you’d place the cursor over it, if it is not already there, and hit Enter, this brings up the waypoint information page which allows editing, deletion, or beginning navigation to the point. To actually navigate the boat to the point you’d need to go to the Steer page or customize the data blocks on the Chart page to show needed navigation information. This unit supports very long waypoint names and can also identify a point with one of 16 symbols. Like its other Elite-5 cousins the DSI version can store up to 1000 individual waypoints.

Routes are created from the route screen by following onscreen prompts as you add each leg of the route from either the waypoint list or from the chart view. Routes can be navigated in forward or reverse. Each saved routes can be viewed on its own page with each point listed. You can display points with bearing and distance or total distance and bearing or latitude/longitude. The Elite-5 DSI can store up to 100 routes.

You activate the man overboard function (MOB) of the Elite-5 DSI with a simultaneous press of both the plus and minus zoom keys. From there, no matter what page you are on at the time, the unit switches to the Steer page and asks you to confirm the MOB function. If you fail to confirm within a couple seconds the unit automatically switches to display navigation data back to the MOB. The Steer page uses easy to understand graphic and digital navigation data to steer you back to the MOB position. I like the MOB function of the Elite-5 DSI and think it works well in providing the helmsman with a clear route back the MOB position that even a inexperienced wheelman should be able to follow quickly and precisely. 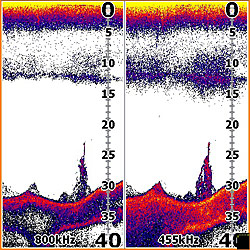 A sounder split window view showing the slight difference in clarity between 455 and 800 kHz.

The Lowrance DownScan Imaging sonar found in this unit is not like your standard fishfinder, it is really a specialized shallow water sonar. Because of the high transducer frequencies used to generate the photo-like onscreen images you shouldn’t expect this unit to perform well in deep water. The maximum practical depth range for the Lowrance Elite-5 DSI is about 200 feet.

Another consequence of the design is the usual sonar controls you’ll find or rather won’t find. There is no zoom, no bottom lock, no A-scope, no shift, and truth be told no real clean way to adjust the gain. This is a highly automated sonar with very few user adjustments available.

Standard features include auto and manual depth ranging, dual frequency split screen, and surface clarity adjustment. Hitting the Menu button from the DSI page pulls up short list of menu items. From here you can fine tune the image contrast, switch to and adjust manual depth range to one of 15 ranges, change transducer frequency, vary the background color palette, or set the level of surface clutter. Going to the main sonar menu lets you change the noise rejection setting and set a variety of installation parameters.

The Lowrance Elite-5 has a bright sharp display screen with lots of resolution combined with a sonar package with features that will be most useful to anglers plying freshwater lakes and coastal anglers who favor shallow water fish haunts.