The Lowrance StructureScan system uses an LSS-1 black box sounder and proprietary transducer to add automated side and down scanning capabilities to HDS-series Lowrance MFDs.

A single multifunction transducer provides both side and down scanning capability. Up to 500 watts of power can be sent out by this transducer using one of two different frequencies. 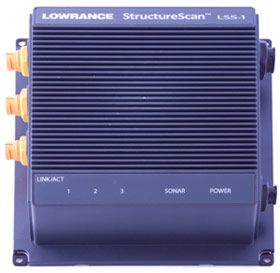 When using the lower, 455 kHz, output the system provides clear sharp side scanned images out as far as 250 feet to the left and to the right as well as down scanned images to a maximum depth of 300 feet.

Switching to the higher, 800 kHz, output further increases image definition while sacrificing some distance in range.

The LSS-1 module is housed in a box approximately 8.5-inches by 7.5-inches with a depth of 2.4-inches. The black box is actually dark grey and is designed to be mounted on the flat surface of a bulkhead or deck.

Power is supplied to the two StructureScan components through the Lowrance LSS-1 black box. It operates on 12-volts DC only and normally draws less than one amp.

When a StructureScan window is active pressing the menu key will bring up the StructureScan menu. Here you can select one of eight color palettes and select display options like surface clarity, noise rejection, flip the left/right view, and turn on range lines.

Most adjustments are made using soft keys. Here you can change contrast, range, frequency, and modify the view. View can be set to display left or right only, both left and right, or down.

There really are no other adjustments to make, gain is set automatically. You can even set the unit to auto range so that is handled for you too. Lowrance has made this system very easy to operate.

We made dozens of passes over discarded concrete bridge pilings sitting randomly on the bottom in 20 to 30 feet of water. I can tell you—this is where StructureScan shines.

The onscreen images of the bottom structure here looked almost three-dimensional. Schools of bait also showed up very well onscreen. I have to say I was thoroughly impressed with the image display and ease of operation.

Back in the Florida Keys testing continued with the temporary installation of the StructureScan system and an HDS-8 display on our Seacraft test boat.

Dozens of passes over submerged structure and alongside vertical pilings were made. I found the system to be very good at displaying large and small hard structure both under the boat and more importantly off to the side where normal bottom-scanning sonar would not see it.

However, there are some limitations. One thing you wont see with this system are large prominent fish arches, not because the system cant see the fish but rather because of the high frequency used to show such high definition in structure.

Like we have done with almost every other sounder weve tested we did made passes by our ping pong ball test rig that simulates submerged fish. The system did pick up the balls and show them onscreen, problem was the system is so accurate the small balls show up small onscreen and can be hard to spot. This really isn’t a limitation as long as the user is aware.

The Lowrance StructureScan system provides easy to use side scanning capabilites and is a great add-on to any Lowrance HDS-series MFD.