We installed a Northstar 6000i networked system, now a Navico brand, for long-term testing aboard our 25′ Contender. The Northstar GPS system included a 10.4-inch and 8.4-inch display, a Northstar black box sounder, and radar.

Most but not all connections in the Northstar network are easily made with supplied cables. The radar black box and any external devices requiring a NEMA signal connect via individual wires and a bus bar. Diagrams in the manual provide information on wiring. We had no trouble wiring the radar but had to make a couple calls to tech support to get the NEMA data transfer to our autopilot right. The radar also requires a user-installed switch to turn power on/off to the antenna. 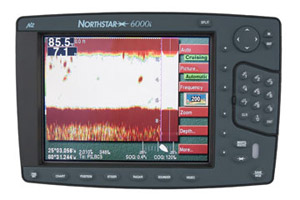 Once all the wiring was complete we followed the manual instructions to set up the ports that allow the components to communicate with each other and to run the radar through its set up. This all went smoothly and according to the manual.

Daytime viewability of both displays was rated excellent, with one caveat. Screen fogging due to high outside air temperatures and humidity levels is occasionally evident in the lower left quadrant of both displays and especially prevalent on the larger screen. It can be so severe, at times, to make reading the underlying information impossible. We found over a period of time the fogging would dissipate. Opening the door covering the chart card helped speed this process.

Night view testing began in twilight conditions and continued until full darkness had fallen. We adjusted the brightness level using an onscreen slider to dim the screen as the light faded. The 8.4-inch screen will dim until it goes black while the larger screen will not, both, however dim sufficiently for night operations on most boats. Most of the pushbuttons are lit, but the level is not adjustable, and none of the 6 soft keys are backlit. Even though both screens provide excellent night viewing the lack of a pushbutton dimmer forces us to rate them only good.

Software and control key layout is identical in both Northstar chartplotter displays. Using the 15 dedicated pushbuttons, cursor pad, and 6 soft keys makes control of most everyday functions a snap.

Red labels with large easily readable letters displayed onscreen describe the function of each of the 6 soft keys. Soft key labels can be hidden from view by pressing the CLR key. Pressing any soft key button returns the labels to view. Normally from 3 to 6 soft keys will be labeled and active depending on the page in use. Waypoint, route, and menu lists are also displayed in an easy-to-read format. Onscreen data box information is selected using soft key.

Four map modes are available on the Northstar 6000i displays, North-up, Course-up, Heading-up, and Leg-up. Modes are selected by pressing a soft key. An optional heading sensor is required to use the heading-up mode. Our machine did not like the Leg-up mode, when it is selected the chart loses all landmasses and displays only a white background.

The Northstar 6000i has three possible split screen display options and all are selected via the SPLIT key. The chartplotter and radar or chartplotter and sounder can be displayed in a vertical split screen. Displaying all three divides the screen vertically and puts the chart on the left in half the screen, then divides the remaining half screen into quarters and displays the radar and sounder. Video can be displayed in a small window over the navigation data by pressing the VIDEO key twice.

Holding the SAVE/MOB key in for at least 4 seconds will activate the MOB function. This single button push switches from whatever screen you have selected to a zoomed-in view of the chart page with range and bearing to the man overboard position displayed on the right side of the screen in large bold letters and numbers. MOB latitude/longitude is shown on the bottom of the page. We think this is an important safety feature of any chartplotter.

To edit waypoint data the user hits the WAYPTS/ROUTES key. Once selected any waypoint data can be changed by the user. Position coordinates can be updated by having the waypoint selected as you pass over it and press the appropriate soft key. This should prove to be a useful function for anglers who get numbers from charts or colleagues and upon arrival find the numbers less than accurate. Once you do locate the structure you’ll be able to update the numbers with a single keystroke.

Manual data entry is accomplished quickly and easily on either Northstar 6000i display using the alphanumeric keypad. Plus, there is no need to transfer waypoint or route data between display units on the network as all data is transferred automatically upon entry.

Redraw on both Northstar 6000i screens is fairly fast, but not lightning quick like we’ve seen on a few other multi-function displays.

We like the Northstar user interface and rate it highly. It has numerous dedicated function keys and very easy to use software.