Pilots flying large aircraft make VHF calls with a hand mike plugged into a bulkhead, change channels with a small control head on the center pedestal, and listen to incoming calls on an overhead speaker. This Raymarine VHF radio matches that design. 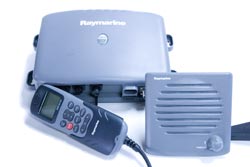 It has three main components: First, the telephone style handset, which contains all the radio controls, a microphone, and a speaker, second, a large external speaker with volume control, and last, the black box, housing the transmitter and receiver.

Supplied cables connect all the components. A second handset can be added as an option.

The main advantage of a component radio is to minimize the use of valuable panel space.

With the main electronics box located in an out of the way space only the microphone hangs near the helm. The speaker can be mounted in the panel of in an overhead space if panel area is limited.

We found the performance of the Raymarine 240 to be about average.

Transmitter power output was very stable though a few watts below the best radios while frequency stability was rated good.

The receiver carries a selectivity rating of greater than 70 dB and attained a sensitivity ranking of good.

Audio output was rated excellent though the sound pressure levels, at 91 dBA, were at the low end of the high-priced radios we tested.

All the controls including the display screen are located in the handset.

Rocker style pushbuttons on the handset change channels and squelch levels. Another rocker on the side controls handset volume. The push to talk switch is on the side too just above the volume control.

The handset can be used like a traditional microphone or held to the ear like a telephone.

A DSC distress call button is under a plastic cover on the back of the handset.

One of the remaining buttons, MENU, brings up a list of six items that control other functions like the hailer, automatic fog signals, an MMSI phone book, local/distant receiver setting, and DSC operations.

Channel scanning options on the 240 include Dual Watch and Tri-Watch, selected via the WATCH key with either a momentary press or a press and hold. Non-priority and priority scanning are turned on and off with the SCAN key on the same manor.

Hailer and automatic fog signals are activated through the menu. Selections include hailer, foghorn manual, and foghorn auto. Hailer or foghorn volume must be adjusted in the manual mode only.

Automatic mode can generate fog signals for powerboat under way, powerboat underway and not making way, sailboat under sail, vessel under tow, pilot boat, and vessel at anchor. The automatic foghorn worked properly and had adequate volume.

The display on the telephone style handset is the smallest of any units in this price category. It has 3 levels of backlighting and normally displays channel selected, volume level, squelch level, and transmitter power level. Current position can be displayed as well.

With all this data on such a small screen, letter and number size is small. Anyone who wears reading glasses would likely need them to read this display. We rated it only fair.