Our Raymarine A50D test unit shipped with an internal sounder and preloaded cartography. It also had preloaded U.S. coastal cartography covering both mainland coasts and the Great Lakes.

You can also get a Raymarine A-series unit with no preloaded charts, U.S., or rest of the world coverage. All A-series plotters can also use Navionics Gold or Platinum cards.

Like other A-series units this one has an internal GPS receiver and can be hooked up and use an optional external GPS antenna.

At different times we tested the A50D using the internal antenna and a Ray125 external sensor. Both worked well at plotting position accurately.

We mounted the Raymarine A50D using the supplied bracket. The bracket is beefy, swivels, and allows you to run wires for the display unit hidden inside then out through the bottom. It uses a single lever to lock the unit tilt angle. Tilt angle is preset to several positions and none of them worked perfectly for our setup so we ended up not liking this mounting bracket very well. 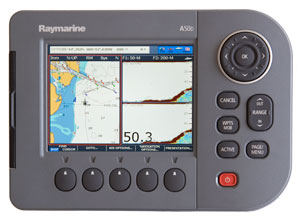 Power and NMEA 0183 data pass through a single cable that fastens to the case back with a twist lock connector. There are two additional cable connectors on the back; one provides a transducer hookup and the other a Raymarine SeaTalk next gen connection. SeaTalk next gen is an N2K compliant network. Hardware for flush-mounting the display unit is supplied.

The Raymarine A50D display screen uses a landscape layout and measures 5-inches on the diagonal. It has a very respectable 640 by 480 pixel resolution.

We rated day viewability on the high resolution Raymarine display screen good, details are razor sharp and clearly readable. However the screen is not quite as bright as some weve seen.

One downside we noticed: The resolution is so high for the size of the screen youll need to have good eyes and get close to all the detail.

When viewed straight on the screen darkens when viewed through polarized sunglasses. When you view this screen from side angles, youll notice it darkens significantly by 45 degrees and will be blank here if youre wearing polarized sunglasses. There is a small of amount of screen reflectivity. No screen fogging was apparent in the display at anytime.

The A50D has two screen palette settings for viewing the chart page, day and night. With the unit in Day a brightness level slider appears onscreen when the power button is pushed momentarily. The arrow keys adjust the brightness as needed.

The Night mode dims the unit significantly and has all the same adjustability as the Day mode. We rated the Raymarine good for night viewability because unless you view the screen from straight out front you can lose colorization and have the screen appear to dim.

The A50D has five soft keys, six function pushbuttons, and a trackpad with an OK button in the middle. Soft key functions are page dependent with onscreen labels above each key. The unit can show full screen views of the chart page, fish finder, course deviation indicator with data, and 3D chart data if available. The unit can also display combinations of views in two, three, or four windows. Pressing the Active pushbutton toggles between open windows making each active and bringing the associated soft key functions up onscreen.

To create a waypoint youd press the waypoints function key. This brings up waypoint related soft key functions. The first soft key lets you place a waypoint at the cursor position, the second at the vessel position, and the third by inputting latitude/longitude to a Place Waypoint dialog box. The last two soft keys bring you to waypoint lists. A double press of the waypoints key is a shortcut to create a waypoint at the vessel position. This works from any screen view.

One way to build a route in the Raymarine A50D is by hitting the navigation options soft key, they choosing routes, and build a new route. The cursor is used to place waypoints on the chart as needed. More soft keys let you save the route, edit it, follow it, and reverse course on it. We found it to be a very intuitive and easy to use function.

Pressing the MOB function key puts the unit in man overboard mode. An audible alarm sounds and if you are on a chart page the view will automatically zoom into the MOB position. If you are not on a chart page navigation data back to the MOB will only be displayed in the data boxes. A second press of the MOB key takes the unit out the MOB mode.

Data boxes can be displayed in normal or large on the chart page. Normal has minimal information and wed choose the large mode. It shows cursor position, course/distance to waypoint, vessel position, COG and SOG.

The depth safety contour on the chart can be changed be the user. Since we run a small boat we set it to the minimum setting of seven feet. This turns all water deeper than seven feet white. Doing this improves day viewability a bit in sunny conditions.

Screen redraws on the A50D took several seconds if you changed the range several steps at once. Ranging out always took longer to update the chart than ranging in.

We tried Heading Up, North Up, and Course Up chart orientation on the Raymarine A50D and all worked very well. It responded quickly when turning in the Heading Up and Course Up mode. 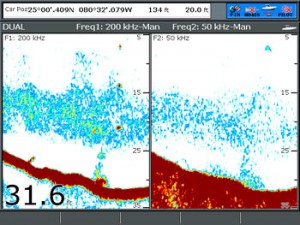 The 200 kHz display on the left side of this screen shot shows our three test targets clearly, however the 50 kHz pulse on the right side did not paint our target balls.

The A50D internal sounder is the most advanced Raymarine fish finder on the market today and is capable of putting out a full 500 watts of power. It has all the features youd want in a fishfinder including dual frequency capability, A-scope, zoom, shift, and bottom lock.

During our testing we had to make a perfect pass over our three submerged targets for this unit to mark them, still it failed to paint the deeper two often. Increasing the gain manually helped somewhat.

The unit appeared to do a fine job painting bottom contours and a few large fish that swam under our test boat. We rated the sounder Good for presentation.

Commonly changed sounder settings like gain, depth, and zoom mode are handled using soft keys. Pressing the menu button while on an active sounder page will bring up the fish finder menu. The A50D fishfinder has a long list of useful features. We found it easy to operate and gave it a Good rating for usage.

The Raymarine A50D features a 2-year warranty and is waterproof to IPX6 standards, meaning it can withstand a stream of water.