The Simrad CX33 E holds up to the Simrad tradition for excellence and robustness with its aluminum frame and polycarbonate housing.

We’ve always been impressed with a Simrad chartplotter and this one is no exception. Our test unit measures 10 inches wide, almost 6 inches high, with a depth of just over 3 inches. 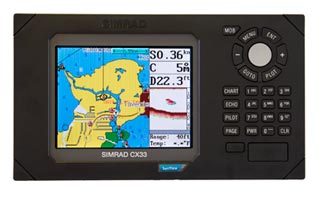 It ships with a GPS antenna and a built-in sounder. An optional dual-frequency transducer completes the marine GPS chartplotter combo package.

We mounted the display using the accompanying metal bracket; it held securely. Wires are connected to the rear of the case with twist-lock connectors.

Our test unit was equipped with a six-inch color screen in landscape layout with a resolution of only 320 by 240 pixels. Fifteen levels of screen brightness control and nine color palettes make for a wide range of screen brilliance settings. Keypad brightness is adjusted separately.

The CX33 screen performed well in sunlight, but it darkens a bit when viewed with polarized sunglasses. Details dont appear as crisp on this Simrad chartplotter as they do on some higher-resolution units. At night, we noted the CX33 E did not dim as far we thought might be needed to run on a dark night, this occurred even with the night palette selected. Wed rate the Simrad CX33 good for both day and night viewability. 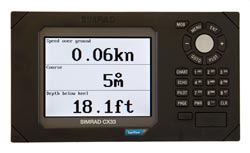 The Simrad CX33 has large user selectable data blocks viewable from far away.

Though the Simrad has outstanding hardware, its software is not as intuitive as some of the other units weve tested.Many other marine GPS chartplotters weve tested can be operated right out of the box without ever cracking open the manual. In our opinion, this Simrad is not one of them.To run it, we needed to occasionally refer to the manual or study the accompanying DVD.Although the Simrad is a bit harder to use at first, its software sophistication, alphanumeric keypad, and abundance of dedicated function keys still get it a good rating for user interface, though it does take some getting used too.

Waypoint capacity on a Simrad chartplotter is seldom a problem as this unit will store up to 10,000 points and as many as 1000 routes.Waypoint names can be up to 25 characters in length and represented onscreen with one of 27 colors and 16 symbols. The CE33 uses C-Map cartography in its single card slot.

The Simrad CX33 E built-in sounder is rated at 600 watts and has features that include marker zoom, bottom lock, shift, and A-scope.An active cursor pad function designed into the software allows the user to adjust the gain without going into any menus. We really like easy to access gain control on any sounder and this one has it.We rated the Simrad integral sounder good for user interface because of features like the active cursor even though we found the menu system less user-friendly a number of others weve reviewed.Shop Simrad by clicking an image below.