The Standard Horizon CP190i is built around a bright crisp 5-inch display screen and features a built-in 50-channel GPS sensor. It also comes with preloaded cartography and is one of the least expensive standalone chartplotters on the market today.

The preloaded charts in this Standard Horizon GPS chartplotter provide detailed coastal coverage of the U.S. including Alaska, Hawaii, and the Great Lakes. It also includes charts for coastal Canada, the northern tier of South America, Mexico, Cuba, Central America, and the Caribbean.

Certainly the most extensive built-in chart coverage we’ve seen in a marine GPS chartplotter to date. If you needed any more coverage the unit is also capable of using C-Map NT+ and MAX cards. The compact Standard Horizon CP190i display unit measures 7.1-inches wide by 4.4-inches high and 3.7-inches deep. 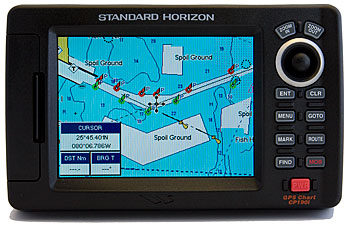 Connectivity
Electrical connections are made on the back panel with a pair of twist-lock connectors, one for power and accessories and the other for an optional external GPS antenna. The display unit can be flush-mounted with supplied hardware.

Should you elect to flush mount this display Standard Horizon advises a potential loss of signal to the internal GPS sensor could require that addition of an external antenna in some applications.

The CP190i will interface with Si-Tex MDS-series radar, AIS receiver and the FF520 black box fishfinder. With its two inputs and three outputs for NMEA0183 data the unit will also provide navigation data to a VHF radio or autopilot.

I connected the CP190i to a VHF radio to verify functionality. NMEA ports 1 and 2 can be set to various modes to accommodate specific gear including high speed mode for AIS operations. The owner’s manual provides wiring diagrams for connecting various equipment using the NMEA interface.

The Standard Horizon CP190i display screen uses a landscape layout and has 320 by 232 pixels of resolution. The screen proved to be bright and sharp when viewed from straight-on during our testing. 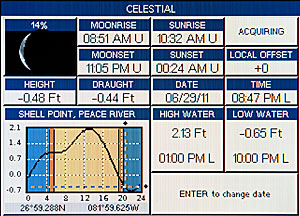 Lots of information is offered on the CP190i celestial page.

Donning polarized sunglasses has no detrimental effects on the viewing; everything was clearly readable at times even at severe side angles. This is a top notch display screen which I rated excellent for daylight viewablity.

The CP190i has five color palettes to choose from including Normal, Classic, NOAA, Night, and Sunlight. I used Sunlight and Normal to view the screen during daylight testing. No screen fogging was apparent in the display at anytime during our testing.

Midrange contrast settings and screen backlight settings adjusted for surrounding light level worked best for me. I used the Normal and Night palette to rate nighttime viewability of the CP190i good. 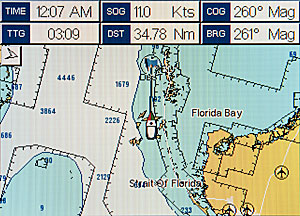 Chart page shown navigating to a waypoint. Data boxes on top can be modified by the user.

Additional main menu selections include celestial, GPS status, NMEA data display, User Points, a Find Services function, and an entry point to the setup menu. If you have a black box sounder or radar connected these pages are selected from the main menu too.

Standard Horizon uses the term mark interchangeably with waypoint. To create a mark from the chart page you simply press the Mark button. This creates the point onscreen and brings up a fix box with the position information, distance, and bearing to the newly created point. To edit a new mark you’d hit Enter and choose one of four options, delete, move, edit waypoint, or directory.

Waypoint editing is accomplished using a small data box while the chart page remains visible as the background. The CP190i has a dedicated Go To pushbutton, pressing it lets you navigate to the cursor or a waypoint.

A single press of the MOB button on the CP190i causes the man overboard function to execute, which in turn displays the MOB waypoint onscreen in red and activates a visual warning onscreen that MOB is active. 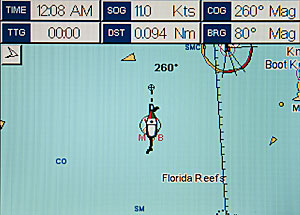 This is the view after pressing the MOB and acknowledging the alarm. Data box information has switched to return you to the MOB waypoint.

As long as you have data boxes displayed on the chart page they will give bearing and distance to the MOB point. If you hit an MOB from any other page you will see the visual MOB alarm, but will need to switch to a navigation page for data to get back to the MOB waypoint. In my opinion, the MOB system in the CP190i is acceptable.

The CP180 has North Up and Course Up chart orientation modes; we tried both and found both worked well.

The Standard Horizon CP190i can store up to 3000 waypoints and 50 routes. You can identify a waypoints by choosing one of 16 symbols and using up to 10 characters in the waypoint name.

A variety of information can be found quickly using the Find key. On the list here you will see port services, tide stations, wrecks, obstructions, user points, and much more. You can also find charted information by placing the cursor over a point of interest using the joystick and pressing the Enter key.

The display unit is waterproof and has been tested to withstand sprayed water. Water intrusion is covered by the long 3-year warranty.

Like its predecessor, the Standard Horizon CP190i has a top notch screen, good ratings for operation, and a long 3-year warranty. When you add in the preloaded cartography this plotter is a buy for boaters shopping for an inexpensive GPS chartplotter.