The Standard Horizon CP390i is built around a very high resolution 7-inch display screen that packs 800 by 480 pixels of resolution. Compared to its smaller brother, the CP390i is a big step up in screen space, pixel count, and the ability to see fine detail.

The preloaded charts in the Standard Horizon 390i GPS chartplotter provide detailed coastal coverage of the U.S. including Alaska, Hawaii, and the Great Lakes. It also includes charts for coastal Canada, the northern tier of South America, Mexico, Cuba, Central America, and the Caribbean. This is obviously a solid cartography coverage area that will suit the needs of most boaters. Should you need chart coverage for any other areas you would simply have to purchase and insert the appropriate C-Map NT+ or MAX card in the unit’s single front panel card slot.

The compact Standard Horizon CP390i display unit measures 10-inches wide by 5.7-inches high and 3.9-inches deep. It is supplied with a plastic tilt and swivel bracket mounting bracket as well as flush mounting hardware. A quick reference guide will get you started using this machine right away. More in-depth explanations of controls and functions are printed in the included owner’s manual. 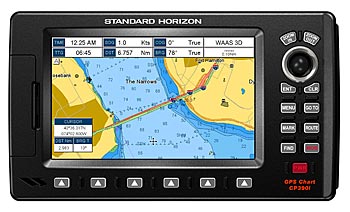 All electrical connections to the CP390i are made on the case back. You will find four twist-lock connectors here, one for power and accessories, one for an optional external GPS antenna, one for a video input and second accessory cable.

If you decide to flush mount the CP390i be aware that you could suffer a potential loss of signal to the internal GPS sensor depending your installation specifics. You may need to add an external antenna in some applications.

With its four inputs and five outputs for NMEA0183 data the CP190i will interface with lots of additional gear. Some of the items that will interface include Si-Tex MDS-series radar, AIS receiver, FF520 black box fishfinder, VHF radio, autopilot and video camera.

Each of the NMEA ports be set to various modes to accommodate specific gear including high speed mode for AIS operations. The owner’s manual provides wiring diagrams with specifics on how to connect a variety of equipment via the NMEA interface.

The Standard Horizon CP390i display screen uses a landscape layout and packs a whopping 800 by 480 pixels of resolution into a screen that measures 3.6-inces high and 6-inches wide. It provides a bright and clear view of onscreen information even in un-shaded sunlight.

The unit is just beginning to acquire satellite signals as viewed in night palette.

Even when I put on my polarized sunglasses the screen remained totally viewable even at severe side angles.

No screen fogging was noted in the display at any time during our testing.

I am rating the Standard Horizon CP390i display screen excellent for daylight viewability.

In the general setup menu, part of the setup menu, you will find a place to choose the display color. There are palettes here to choose from including Sunlight, Normal, Classic, NOAA and night. Sunlight was my choice for daylight operations.

One thing you will notice about this unit is the fine detail of the displayed information. Because the resolution is so high even the smallest number or letter is easy to read. No compromise is made here even when viewing a screen loaded with data.

A quick press of the Power button puts the screen brightness controls onscreen. Sliders can be adjusted using the joystick to set one of 6 levels for brightness and one of 20 levels for contrast—hitting the Enter key locks in the setting.

I used the Normal and Night palette to rate nighttime viewability of the CP390i good. At night the screen is readable even at fairly steep side angles. One downside I noted was the inability to the screen to dim as far as I would have liked.

Like its other siblings, the CP390i is capable of displaying one of three main navigation pages—chart, navigation, and highway—selected from the main menu. Other main menu page options include celestial, GPS status, NMEA data display, user points and the setup menu.

Pages for fishfinder, radar, and video input are greyed-out on the main menu until the specific device is connected. Soft keys allow you to quick select one of six main pages. 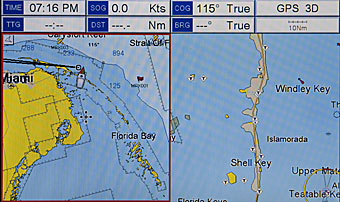 They also present a variety of other options depending on the page being viewed and action being taken. For example, if you mark a waypoint with the cursor options to edit, move, or delete the point will pop up as soft key options.

Standard Horizon uses the term mark to reference a waypoint. To create one from the chart page you simply hit the Mark button for a present position waypoint or place the cursor where ever you like to create a point.

To work with the newly created waypoint you’d move the cursor over the point and select an action using one of the soft keys. Edits are accomplished using a small data box displayed on the chart page or on the waypoint list.

The Standard Horizon CP390i can store up to 3000 waypoints and 50 routes. Waypoints are identified by choosing one of 16 symbols and can use up to 10 characters in the name.

Building a route with the CP390i is easily accomplished on the chart page by pressing the dedicated Route pushbutton which lays down the starting point and brings up soft key functions dedicated to route construction. Each successive leg is added by using the joystick to move the cursor to the next waypoint position then hitting the Route key once more. It is that simple.

When you press the MOB key on the CP390i the unit posts a visible alarm message onscreen, creates an MOB waypoint, and shows the navigation data back to the point as long as you have some data boxes displayed on the chart page. After the initial message you will need to press any key to clear it off screen. Should you execute MOB from any other page all you will see initially is the visual MOB alarm. Once you acknowledge that message you will need to switch to a usable navigation page to get back to the MOB waypoint.

Chart redraw speeds on the CP190i are very fast. However, the unit doesn’t like presses of the zoom buttons in quick succession. You will get much better results by pressing the zoom button and waiting the split second it takes for the chart to redraw. Otherwise you may not get all the zoom you were seeking. 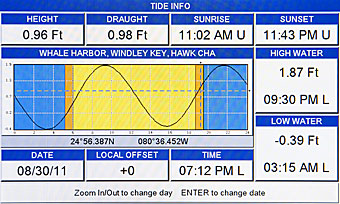 Much valuable information is display on combination graphic and numeric tide page.

The Standard Horizon CP390i has North Up and Course Up chart orientation modes. Both worked well in my testing. Another related chart tidbit is the option to select one of seven icons to represent your vessel.

The display unit is waterproof and has been tested to withstand sprayed water. Water intrusion is covered by the warranty.

Tidal information, port services, information about navigation aids and much more can be found by using the joystick to place the cursor over an area and pressing the Info button or by choosing Find Services from the main menu.

With its sharp bright high resolution display screen, multifunction soft keys, preloaded cartography, and wide ranging ability to interface with other marine electronics the Standard Horizon CP390i offers lots of bang for the buck. Add in the long 3-year warranty and you have a real deal for boaters seeking a capable chartplotter at a moderate price.