The Standard Horizon FF525 black box sounder adds high-power dual-frequency fish finder capability to a long list of Standard Horizon multifunction displays, including the CP- and CPV-series, neither of which is equipped with their own internal sonar. 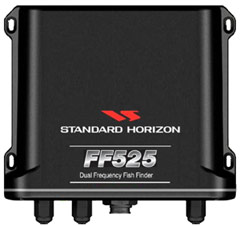 According to a list in the FF525 manual, optional transducers include five 600-watt units and one other 1000-watt transducer. Our test transducer sits at the top of the lineup for recreational 1000 watts transducers.

The maximum power outout of the FF525 has been upgraded to 600- or 1000-watts RMS of output power. Optimal power output is automatically selected depending on the transducer.

One big upgrade Standard Horizon made constructing the FF525 was to increase the level of waterproofing significantly over the earlier splash-proof FF520. 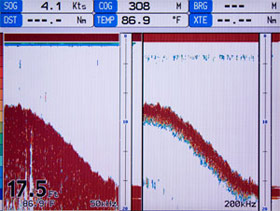 The FF525 was coupled to a Standard Horizon CP1000C for this dual frequency screen shot. We found very good results could be achieved using the automatic gain and depth settings. Both sides of the screen have depth markings and the A-scope display. Overall on-the-water performance of the FF525 was good.

According to Marine Division Product Manager, Scott Iverson, the new box is waterproofed to JIS7 standards meaning it will survive going underwater to a depth of one meter for 30 minutes.

We reviewed the FF525 using the full screen sounder display with A-scope in both single frequency and dual frequency modes. Data boxes at the top of the screen use a small section of vertical screen space.

This sounder has zoom, bottom lock, and shift capabilities, basically all the same sophisticated features you expect in a high dollar standalone fish finder.

This box was tested over several weeks while traveling and fishing in the Bahamas.

I did not run it over the three target test range I normally use for sounder reviews due to logistical issues.

Performance ratings over our extended test in everything from water barely deep enough to float the boat all the way out to depths well over 1000 feet were rated good.