The Standard Horizon GX1000S Eclipse is a compact easy-to-operate no-frills entry level marine VHF radio that does the job of communicating for very little money.

Some scanning options, backlight adjustment of brightness and contrast, turning weather alert on or off, and setting time location and offset are accomplished by entering the radio setup menu. 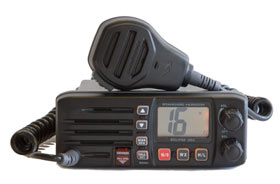 A low battery warning message appears onscreen when input power drops below 11.4 volts. Increasing the voltage back above 12.4 turns the warning off.

We found transmitter power output and frequency accuracy to be stable throughout our range of tests, both earned good ratings.

The receiver selectivity specification is a very good 70 dB. Audio output was a bit weak only measuring 84 dBA in our audio output testing.

This radio is waterproof to IPX7 standards meaning it would survive submersion to a depth of one meter for 30 minutes. This radio will not transmit if input voltage falls below 11.4 volts.

The GX1000S has a 1.5 inch by 1 inch display screen. It shows channel numbers in large block numbers mid-screen with alpha indicated for the appropriate channels.

Channel comments scroll across a five-character line at the bottom of the screen. When the radio is connected to a GPS time and position can be displayed on the comment line.

You toggle between navigation data and channel comments by pressing and holding the H/L key. Frequency group, transmitter power, and transmit/receive icons are also shown onscreen. We rated the display screen good.

A rotary knob turns the radio on and off and sets the volume; a second sets the squelch level. Channel selection is made with up/down arrow keys on the front panel.

Dedicated buttons can toggle between the last selected channel and 16 or 9, toggle between voice and weather channels, change transmitter power from low to high, and operate scanning functions. Pressing the 16/9 key and then the WX key switches channel groups.

Memory and Priority scanning are available after the desired channels are placed in memory. Choosing memory or priority requires entry into the radio setup menu for selection.

Selecting the channel then pressing the MEM key locks a channel into memory. Memory scan looks at all channels in memory in numerical order from lowest to highest.

Priority scan inserts a look at channel 16 between each memory channel.

The GX1000 is classed as an SC101 radio for DSC operations. That means it has a single receiver listening to both voice communications and DSC digital data coming in over channel 70. This radio will send and receive distress, individual, all ships, and send and receive position data. It will store up to 15 names and their associated MMSI numbers used to make DSC calls. Names can be up to 11 characters long.

The Standard Horizon GX1000S carries a low price and is an outstanding buy for a unit of this caliber. This marine VHF radio carries a 3-year warranty.