The GX5500S can connect to as many as two optional remote microphones and be used with an optional voice scrambler. It also has the ability to couple to a Bluetooth® headset. 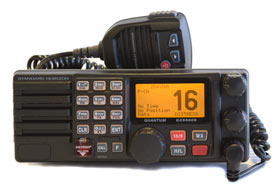 To use Bluetooth® an adapter unit must be installed, and then the headset must be paired to the specific radio.

We found transmitter power output and frequency accuracy to be stable throughout our range of tests, both earned good ratings.

Audio output was outstanding with sound pressure levels measured at 98 dBA. This radio also has treble and bass controls.

One-button control is available for selecting transmitter power level, toggling between weather and voice channels, accessing the DSC call menu, and making a quick 16 selection. A combination press of the 16/9 key and weather key lets the user select between US, International, and Canadian channel groups.

Volume, squelch, and channel selection are controlled with knobs. The easiest way to select a channel on this radio is by pressing the appropriate numeric keys. Time, position, course, and speed can be displayed onscreen when GPS data is input to the radio.

Most functions on the GX5500 are operated by pressing the function key followed by an alphanumeric key. For example, hitting the F key followed by the 1 key activates screen backlighting adjustment. Once selected backlighting is adjusted up or down by turning the channel selector knob.

A low battery message appears onscreen when input power drops below 11.6 volts. When we increased the input voltage back above 12.4 the warning disappeared.

Dual Watch scanning mode is turned on using the function key and dual key. The function and memory keys are used to select and deselect channels for memory scan. Memory scan looks at all channels in memory in numerical order from lowest to highest. Priority scan inserts a look at channel 16 between each memory channel.

Once the foghorn is selected via the function and fog keys you go to the automatic fog signal menu and pick the appropriate foghorn pattern for use.

The Standard Horizon GX5500S has listen-back capability when a PA horn is connected, this can be a very useful feature when trying to communicate with people the foredeck or on another boat near the bow.

The GX5500 is a Class D radio and has a long list of DSC calling features. Before you can make a distress or any other type of DSC call with this marine VHF an MMSI number must be programmed into the radio.

We programmed in a number to see how well it worked. Numbers are set with the channels selector two times to make sure it was input properly. This radio will make distress, individual, all ships, group calls and send and receive position data.

I have installed the Standard Horizon GX5500S VHF radio, with the new blue tooth headset, on my boat. The radio is great to begin with, but the headset makes it even better. No more wires to restrict movement, now I can move about my boat and still stay in contact on the VHF radio

The only draw back of the system I found was the length of the RAM microphone cord, which I consider too short. Other than the small issue with the cord everything about this marine VHF radio system all works great.

The GX5500S is a top marine VHF radio and compares favorably with the best on the market. It carries a 3-year warranty.