The freshwater sonar market has become very competitive in the last couple years with Garmin and Raymarine becoming major players. If you’re looking for a fishfinder/GPS combo under $700, you have three great choices: Lowrance Elite-7 HDI, Garmin echoMap 50dv and Raymarine Dragonfly. Let’s put them all to the test and find out which one is the best.

Lowrance Elite-7 CHIRP features an extra wide 7 inch screen that makes it easy to display sonar, downscan imaging and mapping in split screen mode all at the same time. The unit offers many features that until now have only been available in the top of the line HDS series. The features include: both broadband and downscan sonar, detailed US lakes and coastal maps, support for Insight Pro and Navionics Gold and Premium, NMEA 2000 networking for waypoint sharing and external GPS antenna connection, Downscan Overlay combining broadband sounder and downscan imaging views, and Trackback allowing to scroll through sonar history and identify key areas.

The Elite 7 CHIRP has a 7 inch wide-screen color display with 3-panel viewing and easy to use menu system featuring 8-page panel selector. The new HDI transducer combines signals for broadband sounder and downscan imaging. There are 2 transducer frequency options – you can either select 83/200 kHz for depths of upto 1000’ or 50/200 kHz for depth of upto 2500’. Both transducers feature downscan imaging for picture-like views of upto 300’. Elite-7 HDI is also compatible with select Airmar transducers used with HDS series and legacy broadband sounder only transducers featuring the blue 7-pin connector. The Elite-7 provides excellent views, so detailed you can even see a lure tracking in the water. With true downscan imaging you don’t have to rely on interpretation, the display exposes fish, structure and bottom contours in near picture-perfect clarity.

To make it easier to find your favorite screen configurations, the Elite 7 CHIRP offers 8 preset page layouts and quick access to all features using one-thumb operation. Page layouts can also be fully customized, you can change the size of each of the displays in the split screen. You can also create your own maps based on sonar recording using Insight Genesis software. Another useful tool is the ability to share waypoints with other Lowrance Elite and HDS units through the NMEA 2000 port. With the Trackback feature you can scroll back through the sonar or downscan imaging history and mark waypoints without sacrificing real-time sonar recordings so that you can save time and gas and never miss a hotspot. There is also Downscan Overlay feature – you can now overlay your downscan images onto broadband sonar display giving you more detailed view that clearly separates and exposes fish targets from the surrounding structure. This is especially useful when identifying fish and bait suspended in and around flooded timber. Elite-7 CHIRP gives you all the tools to make the most of your time on the water. 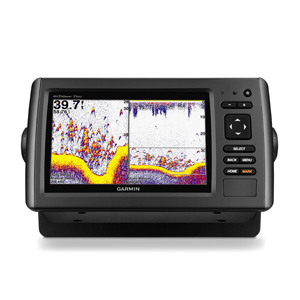 Garmin echoMap 73dv combines the award winning sonar from the echo series of fishfinders with the high precision GPS and down imaging capabilities. It is a compact unit that doesn’t take up a lot of dash space. You can bracket mount it, flash mount it or – for the ultimate built-in look – flat mount it from behind the dashboard using the optional flat mount kit. The display is 7 inch on the diagonal, high resolution and visible in direct sunlight thanks to its super-bright LED backlight.

The echoMap 73dv has a new 5Hz GPS receiver. It updates position and heading data 5 times faster than previous models which gives much smoother chart scrolling and autopilot operation if you’re using it with an autopilot. The unit comes preloaded with Bluechart coastal charts or LakeVu HD inland charts. LakeVu HD includes detailed cartography of over 14,000 lakes in the US plus enhanced detail with 1 foot contour lines for over 500 lakes. For the ultimate in inland cartography you can purchase LakeVu HD Ultra card that adds auto-guidance, dynamic lake levels, customized range shading, 3d imaging. The mapping software offers basic navigation chart as well multiple 3d views ranging from airplane view overhead to bottom contours. Creating waypoints is very easy, just drag the marker to the desired position and hit the Mark button. You can also create a way to the marker without having to create a waypoint which is very convenient.

Garmin equipped the 500W, 77/200kHz sonar with high definition down imaging that paints a picture like image of the structure and bottom. Down imaging coupled with the regular broadband sonar provides incredibly detailed display of what’s underneath the boat. You can split the screen vertically, with down imaging and regular sonar side by side. You can also display the 2 frequencies side by side, or have sonar output displayed together with map. The screen can also be split horizontally. The unit provides automatic sensitivity and range adjustments but you can choose to adjust the settings manually. All the usual sonar features such as zoom and bottom lock are available as well. The hybrid broadband/DownVu transducer is included.

Garmin echoMap 73dv has 2 micro SD card readers built-in. You can have cartography card inserted into one, and blank card for waypoints and other user data on the other. You can also record sonar data to one of those SD cards and review some of your favorite fishing holes later on. The echoMap 73dv also has built-in wireless Ethernet adapter that can be used to send data to an Ipad running Garmin’s Bluechart Mobile application. The fishfinder is great for coastal cruisers but it is ideal for inland anglers who are looking for accurate sonar and great inland cartography.

Raymarine has entered the freshwater market with the Dragonfly model which was the first compact fishfinder that offered ultra-high resolution imaging sonar featuring CHIRP technology that lets you view the world beneath your boat like never before. You can experience photo-like realism of down vision with unmatched clarity and object recognition.

The Dragonfly provides 2 discrete CHIRP sonar channels: down vision and fish targeting channel. You can view them independently or switch to split screen mode for the ultimate in underwater intelligence. Dragonfly is paired with Raymarine’s exclusive dual element transducer. One element emits a wide beam that captures the big picture, while the second element provide the narrow cone-shaped beam for imaging fish targets so you’ll never miss any action below.

The Dragonfly 5PRO features 5 inch ultra-bright color display, optically bonded for maximum visibility and contrast even in bright summer sun. The tilt and swivel holster’s small footprint makes it easy to mount anywhere on board. The unit has only one plug which very narrow and easy to fit through holes while installing. The user friendly interface eliminates the need for complicated controls and adjustments, the operation of the unit is controlled with a joystick and 2 additional keys. The Dragonfly also features very accurate, 50-channel GPS and it comes with Navionics map cards included.

Lowrance Elite-7 HDI, Garmin echoMap 50dv and Raymarine Dragonfly 5PRO all offer similar functionality and features. There are, however, notable differences – first of all Elite-7 and 73dv have a larger screen. Dragonfly compensates the size difference with more crisp and clear display. Elite-7 also has several features and tools not found on the other 2 units, for example downscan/broadband overlay and ability to create maps from sonar recordings. Garmin echoMap 73dv has the best cartography of the 3 units. Dragonfly is the most user-friendly with a very intuitive interface. Dragonfly also excels in the sonar accuracy and realism which is the most important functionality in a fishfinder. The Dragonfly is an absolute game-changer when it comes to target separation and displaying fish and structure. There is no more guesswork – the fish look like fish, rocks look like rocks, and trees look like trees. Raymarine Dragonfly 5PRO is the best fishfinder in the under-$700 price range. You can get a great deal on Raymarine Dragonfly 5PRO here.