It has become increasingly difficult since the advent of the modern wireless-equipped fishfinder for manufacturers to strike a balance between largely unnecessary features and vital, meat and potatoes fishing tools. The most important single asset for a finder is easily visible and accurate imaging, which is sometimes lost in favor of bells and whistles. Many fishfinders resemble tablets with a sonar app installed alongside a blizzard of other options. Let’s examine the three most popular high-end models priced under $1000 and find out which one of them is the top performer.

Lowrance introduced the original HDS series in 2009. The HDS Gen2 series launched in 2012 provides all features from the original line with a couple enhancements: faster processor speed and the StructureMap view that allows the user to create bottom contour maps. With the addition of the optional StructureScan module Lowrance HDS 7 Gen2 delivers side imaging, down imaging, broadband sounder and navigation to give the user the complete picture. Sidescan provides an image for upto 500 feet on either side of the boat. Downscan displays what’s directly beneath the vessel. StructureMap view allows the users to overlay structure scan images on top of the lake charts. This provides an easy way to pinpoint the location of objects in the sonar output in relation to the boat’s position.

The unit’s LED display itself is crisp and clear, and seems to have no problem with bright sunlight. The GPS is accurate and has a quick refresh rate. It is compatible with nearly every major cartography package available, but shines in its native use of Lowrance’s Insight Genesis software. It’s a custom map maker, and lets the user define bottom contours and points of interest with GPS waypoints, and saves all parameters in a searchable database.

The raw fishfinding end of things is also well represented in the HDS 7, with a set of factory configured “fishing modes” that brought a noticeable improvement in sonar sensitivity. The sonar mode is quite accurate at the 200 and the 83 kHz settings, although the unit’s automatic sensitivity auto-adjust tends to err on the side of clarity. This is not a problem in practice, as the broad range of viewing options allows significant image tweaking. The ability to pick from more than a dozen color palettes helps in this matter as well.

Humminbird 899ci HD SI offers users a clear, crisp image on a 7” liquid crystal display screen that’s visible even in bright sunlight. It provides side and down imaging as well using dual-beam sonar in order to offer the most complete visualization beneath the surface of water. The Dual Beam Plus feature has a depth capability of up to 1500 feet and the side imaging sonar will give you 150 feet of visibility on each side of the boat. The 899ci provides adjustable width of sonar beams—20 degrees, 60 degrees, or precision 180 degrees—depending on the needs of your location and the fish you’re targeting. The unit also comes with an internal GPS with 50 channels and dual SD card slots.

With so many technical offerings, this could be a tricky system to use. However, Humminbird has also equipped the unit with a number of features designed to render the operation smooth, and navigation of the features and settings quick and easy. Their X-Press™ Menu system is user-friendly and gives quick access to tools such as a 2.5 inch target separation function or a 3-D chart view.

It worth noting that Humminbird 899ci HD SI provides Ethernet connectivity, however, it requires an adapter cable and switch. While this may be slightly inconvenient, this does allow the unit to communicate with other Humminbird devices. 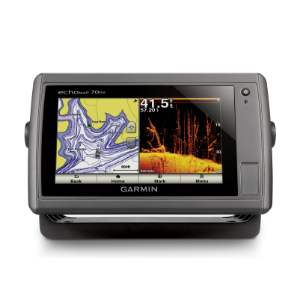 Garmin echoMap 70dv offers seven-inch touchscreen with two-point gesture control. The unit has broadband sonar and DownVu scanning to provide an almost photographic picture of what’s under one’s boat. Able to support SideVu scanning with optional GCV 10 Black Box technology, the echoMap 70dv has a transmit power RMS of 500 and a Peak-to-Peak transmitting power of 4000W. The 10Hz GPS receiver is able to update position and heading 10 times per second and it displays a fluid vessel movement and makes it much easier to navigate and mark up to 5,000 waypoints.

Coming complete with preloaded LakeVU High-Definition maps that show more than 17,000 lakes, it makes chart plotting much easier than before. For those who have mobile devices they wish to use on their fishing trip, the echoMp 70dv can wirelessly connect to Apple using BlueChart Mobile. Using HomePort planning software, its sonar-recording capability is able to coordinate the timing of the sonar return with the boat’s position, providing a more accurate picture of what’s going on below.

Garmin echoMap 70dv can be flat, flush or bail mounted and it provides a number of convenient ways to keep it nearby. The two microSD data card slots allow for information to be uploaded in an instant, providing fishermen with critical details. Its sonar recording capability allows it to save digital information on a map for future reference, allowing the fisherman to keep tabs on the best spots.