The West Marine VHF580 is sold online through the West Marine website and nationally in stores. This entry level marine VHF radio has all the basics plus a Class D DSC rating.

The front panel features up/down channel selector pushbuttons as well as one-button control to select transmitter power level between 1 and 25 watts, toggle between weather and communications channels, menu, some scanning options, and a quick 16 or 9 channel selection. 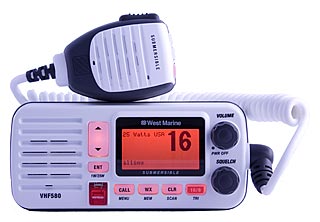 Rotary knobs set audio volume and squelch as well as turning the unit on or off.

Other functions like the screen backlight adjustment and contrast, key beep, channel group selection, and weather alert are handled through the setup or system menus.

The menu button, arrow keys, and enter button step you through each menu selection. Menu names are generally spelled out and easy to read and understand.

When you use the up/down arrow buttons on the front panel or on the microphone to select a channel you will see a list of seven nearby channels including each respective channel name displayed onscreen while you are making the selection. First time Ive seem this on a marine VHF radio, it seems like a nice feature.

Receiver sensitivity was rated good as was receiver selectivity of 78 dB. Audio output was sound quality was rated good and sound pressure levels measured at a very respectable 90 dBA. When the volume was set at high levels there was some distortion noted in the voice reception.

We rated the display on this West Marine VHF radio good. The VHF580 uses a monochrome full dot matrix screen to display channel numbers, alpha channels, transmitter power level, selected channel group, and channel comments. If the latter are too long to display all at once the information will scroll across the bottom of the screen.

When connected to a GPS the VHF580 will display date, time, and position in latitude and longitude. This West Marine VHF radio is capable of powering an external speaker.

The West Marine VHF580 is capable of scanning all channels in order or setting up Dual Watch and Triple Watch modes. Memory scan looks at all channels that have been locked into memory and checks them in numerical order.

Scanning options are controlled with two front panel pushbuttons and a single menu selection. A variety of scan mode combinations are allowed. For example, you could monitor weather alert and triple watch while doing a full channel scan.

DSC operations with the VHF580 are rated Class D, meaning it has two separate receivers, one for voice communications and the second continuously monitoring channel 70 for any incoming DSC calls.

This radio has advanced DSC features and will make distress, individual, all ships, group, position request, and position send calls. A call log will display information on the last ten distress calls received. It will store up to 20 names and their associated MMSI numbers in a directory. All DSC calling features are controlled through the call menu.

The VHF580 is priced right at slightly north of $100 and is one of a new breed of entry-level VHF radios equipped and rated Class D, plus it carries a 3-year warranty.