The West Marine VHF650 is built by Uniden and sold through West Marine. This mid-level marine VHF radio has some unique features normally only found in more expensive gear.

They include a basic hailer, battery voltage monitor, and dot matrix display screen. Plus, its waterproof to tough JIS7 standards, meaning it will survive submersion to a meter for 30 minutes. 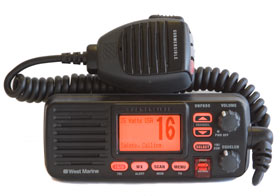 Basic functions like backlight adjustment, turning key beep on or off, selecting a channel group, and making DSC calls are handled through menus.

A low battery warning produced an audible alarm and shows a message onscreen when input power drops below 12.7 volts. When we increased the input voltage back above 13.0 volts the warning terminated.

The VHF650 has a basic hailer, called Public Address in the manual, that provides 10 watts of output power. Thats more than enough for short range communications with other vessels close aboard.

The system is operated by pressing and holding the PA button on the radio front panel. This will transition the unit to PA mode and annunciate PA onscreen. Then you simply use the microphone normally and your voice will come out over a connected hailer horn. A hailer horn is an add-on option.

We found transmitter power output and frequency accuracy to be mostly stable throughout our range of tests, both earned good ratings.

This West Marine VHF radio has a dot matrix display screen. Channel numbers are shown in large block letters on the right side of the screen above a channel comment line. If channel comments are two long to display in the alloted space they will scroll across the screen.

Channel selection is made with up/down arrow keys on the front panel and microphone. When GPS data is input to the radio it can display date, time, position, course, and speed.

Basic scan modes start with monitoring weather only while operating the radio normally. Every seven seconds the radio will scan the last weather channel selected and check for a weather alert.

Dual Watch and Triple scan the selected channel and 16 and/or 9 every two seconds. Memory scan looks at all channels in memory in numerical order from lowest to highest.

Dual, Triple, and weather alert can be combined with memory scan. Scanning options are controlled with menu options and a single front panel button.

The VHF650 is a Class D radio for DSC operations. This means it has two separate receivers, one for voice communications and the second continuously monitoring channel 70 for any DSC calls. This radio will make distress, individual, all ships, group calls and send and receive position data. It will store up to 20 names and their associated MMSI numbers for making DSC calls as well as 20 received calls.

For a fully equipped and compact radio like this one, we found the price very reasonable. The unit carries a 3-year warranty.

It would be a nice little radio if only they would eliminate the “overvoltage alarm”. The factory-set voltage window is too low, cannot be defeated, and goes of continuously when I am underway. My Yamaha outboards have been checked twice and both times the alternators were within Yamaha specs. I spoke to Uniden (maker of this radio) and they said it was a safety feature and hence cannot be disabled.