Bass Fishing Tips and Techniques – How To Catch Big Bass

Need to Know About Black Bass 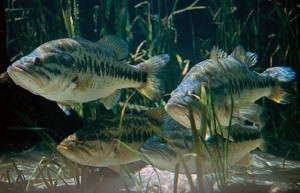 Black bass are some of the most commonly fished species in the world – and they are especially popular in North America and Canada. There are several types of black bass, including smallmouth bass, spotted bass, Kentucky bass, redeye bass, and the most common of these, the largemouth bass. Black bass are scientifically classified as any fish in the genus Micropterus.

Bass are also closely related to Sunfish, but differ slightly in body shape. The very common fish can be found in most parts of the world, including New Brunswick Canada, to Mexico. Currently, every state in the United States has populations of black bass in their lakes and rivers.

Now, sport fishing is becoming more and more popular, with high schools, colleges, and nationally recognized organizations holding competitions. Black bass are often the targets of these fishing competitions due to their rapid breeding and high populations. As an industry, fishing has also rapidly grown. America exports fish to many countries outside of the US, and black bass alone are exported to over 60 countries globally.

Recreational angling has always been a great way to relax and enjoy a nice day. Now, the black bass has become so notorious that it is the second most purposefully fished species in the US. Obviously there has to be an appeal to black bass, otherwise they wouldn’t be as popular as they are. 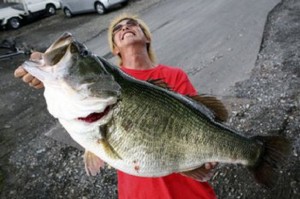 Though there are several types of black bass, most of them share certain similarities. Every single fish that is considered a black bass has the same basic coloring; a dull green-brown with splotches of darker brown along either side, and a white or white-yellow underside.

Most black bass are within the 15 to 25 foot range, weighing an average of 10 – 12 pounds. The biggest black bass ever weighed was caught in a little Georgia lake, and was reportedly 22 pounds, twice the average size of a black bass! This monster of a fish was a largemouth bass, which is not surprising as these are generally the largest types of black bass.

Catching black bass is difficult, but it’s definitely rewarding. Sometimes considered the most elusive game fish, black bass can actually learn from the mistakes they made in the past. This means that if you fail to catch a largemouth bass your first encounter, it will only get harder the next time. This also means, unfortunately, that if you are bass fishing at the same location and releasing the fish, then after a while the difficulty of fishing in that entire area will rise, because a large amount of the fish you caught and released will already know your tricks. If you are catching bass recreationally and plan to release them, it’s important to keep this in mind.

Another important thing to know about black bass is the fact that they have extremely good senses. Not only can they see you from your boat most of the time, if you’re wearing bright colors then you are probably scaring away most of them. Black bass are extremely intelligent creatures. Even excessive movement may warn these fish of your presence, and more than enough times that will be enough to keep them far away. Black bass have extremely high sensory skills.

Biologists state that not only are these critters extremely smart and adapt to circumstances rapidly, but they have a very keen sense of touch as well. They have specialized nerve endings housed in pores that run along either side of the fish, and by some estimates suggest that a black bass can feel when an object that weighs less than a single drop of water falls into 100 gallons of water. This sense is called the ‘lateral line’. It has also been proven that these fish don’t even need to use their other senses if they rely upon this ‘lateral line’ and can navigate even without using their eyes or ears. This makes catching black bass that much more difficult, but don’t give up just yet.

Bass fishing is highly rewarding, and after you learn some certain tricks and tips, you’ll be ready to catch them left and right in no time. 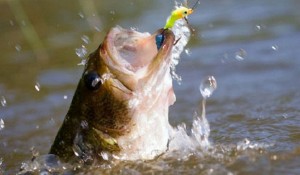 For catching any fish, or hunting any game, you need to know one major thing – you’re environment. You need to know where bass are, what they like, and what they do. It’s sometimes hard to imagine what a fish would be thinking, but if you understand how black bass react in certain circumstances then you’ll be able to catch a much larger amount and probably bigger fish too.

Understanding Bass Life: To catch a large amount of black bass repeatedly, then you need to know how a black bass lives its life. Bass generally live from 10 to 15 years. Oddly enough, many of the extraordinarily large catches were younger fish, but most often, the female fish grow proportionally to their age. Bucks, male bass, are much smaller at the time of maturity, and are usually found guarding nests. To catch a significant amount of bass, you’re going to want to start fishing pre spawn. Pre spawn is the time when black bass feed rapidly in order to prepare for the spawning season. Because black bass are in almost every type of environment, it’s difficult to give an exact date and time when the pre spawn season is. Most black bass will prepare for spawning in the early to mid-spring. The water temperature should average about 60 degrees Fahrenheit, depending on your location and the yearlong temperatures. During this mass munching time, black bass will move to shallower parts of lakes, and search for more food. Structure and underwater plants in shallow water are very promising places to look for black bass. Bass typically hide and wait for prey to swim by, so structures like rocks are also good places to keep an eye one.

The Weather: Bass are also very weather dependent. Cloudy days usually mean that black bass will leave their cover more often than they would on very bright, sunny days.

Small Baits: One of the biggest things to remember when fishing for black bass is the bait you use. One common mistake that people make is using bait that is too big, just because they assume bigger is better. Often times, black bass will eat prey that is as small as one fourth of their size.

Use Various Baits: Black bass are also quite picky. In very clear waters, you may want to use a red lure. Largemouth bass and many other types of black bass are attracted to red, but don’t use this technique too often as many have learned to associate the color with anglers. Try using some live bait with a slip bobber. A wide variety of live bait can be used, as black bass will even go for frogs and crayfish if they feel up to it.

Bass Nesting Behaviour: During spawning season, both male and females can be found around nests. Black bass generally make their nests in locations with a hard floor covered by a layer of a soft material, such as clay or plant matter. Again, this varies based on where you are fishing.

Black bass fishing can be one of the most frustrating things an angler will tackle, but if you consistently catch black bass you will feel like a pro. Catching black bass is as rewarding as it gets, so be prepared to struggle a little bit, and rejoice when you catch your first few. Learning some things about their habits and nature will help you catch more at higher rates, and can ultimately lead to you becoming the best angler you can be.