How To Catch Steelhead – Fishing Tips

One of the most prized American game fish is the rainbow trout, and its very close cousin, the steelhead. These fish are natives of Asia, the Pacific coastal area of North America, and the tributary rivers that empty into the Pacific Ocean. 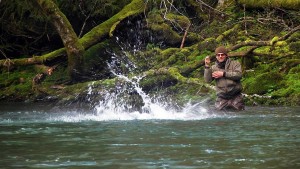 Steelhead are the same species of fish as the rainbow trout; what sets them apart is their choice of habitat. Steelhead are anadromous, which means that they don’t spend their entire life in rivers, as the rainbow trout does. The steelhead migrate to an ocean or other large body of water (such as an inland sea; the Great Lakes, etc.). The fish may remain in the river that they were born in for one to three years before migrating to the sea.

Due to the much greater amount of rich food present in the sea than in rivers, steelhead can reach a much larger size than their river dwelling counterparts. Steelhead also lose the brilliant, colorful hues that characterizes the river dwelling trout, instead becoming a more subdued grey-brown, from which they get the name steelhead. Upon returning to the river to spawn, the steelhead regains some of the trout coloring.

Steelhead, like river trout, return to the place where they hatched to spawn (breed). It is the time when they have returned to the river that is the most popular and easiest time to fish for steelhead. 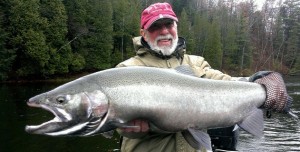 Your fishing strategy will be affected in a large way based on which run you are fishing. Since summer run steelhead mature as they are traveling up river, they spend quite a bit longer in the river, giving you a much longer shot at catching them.

Winter run fish move quickly towards their spawning area; they don’t hang around like the summer run fish. These fish, though the harder to catch, are the more preferred for their maturity, and consequently greater size.

Your success in fishing always hangs in a large part on the water you are fishing. When looking for steelhead, gather as much info about the stretch of water you intend to fish. Make sure that it actually has a good run; unless you are out for relaxation, steelhead are already hard enough to catch without fishing empty waters.

Check with locals and websites about an area’s water to get the best inside scoop on a particular river. The local bait shop usually is the hangout for the local experts.

Steelhead generally move quickly. Summer run fish maturing will stop in favorable areas longer, but still are on a trip to their spawning area. Winter run fish generally only stop to rest briefly and to bite at interesting things that show up on the water. To catch steelhead, you need to favor moving.

If an area is holding a good number of resting fish, you can certainly spend a fair amount of time there. Otherwise, if you are getting any action, try another spot. Sticking around will lead to more lost chances.

Another important task is to make sure all you gear is ready at home, and that you can carry it in a way that doesn’t slow you down too much. Don’t lose your time sorting gear when you are at the river.

The behavior of the water at any giving time is going to dictate your approach to the fish. High water that is moving at very high speeds, so much that you can make any of the bottom out clearly, is not good for fishing. Your lure likely won’t be noticed much, and you can’t control an approach. However, don’t ever write an area off if you can see fish sticking around.

In faster water, a faster, more aggressive approach may be required to get the fish’s attention. Try casting right to fish that you see. Make sure you move you lure around enough to be seen. You want to keep things looking natural, but a little jerking won’t be suspected in turbid water.

In slower water, you won’t want to make a huge show, as you will scare the fish. Try casting upstream from fish you see and working it down toward them. If you are having trouble getting noticed, then you can up the aggressiveness on your approach.

In fly fishing, if you aren’t getting noticed, don’t move right away if the fish are still sticking around and you can be sure of that. Fish are fickle things, and any changes can bring a result. Start by altering the intensity of your approach, then what you are offering (fly). Try lots of stuff till you find what brings a response.

On flies, start with a subdued offering in calmer water, something more flashy in fast water. If there is a hatch of bugs occurring, you can bet the fish will be there (although, winter run fish don’t stop for much). Start by mimicking what is hatching. If you aren’t getting much action, add something interesting to get the fish to strike. Modify your lures to make them look most like the bug you are trying to imitate and move naturally; many fresh lures move awkwardly. However, something out of the ordinary is sometimes the ticket to getting a fish’s attention, so keep your options open.

Steelhead prefer water that is a few (at least 2-3) feet deep, that is moving at a brisk pace. Swollen flood waters will make it hard to find fish. If the water becomes too shallow, the fish won’t will keep moving and not rest there, because they are too exposed. The fish prefer water that is moving briskly to rest in, as it keeps the oxygen coming, but if it’s too fast, they can’t rest well, and will move on to calmer areas.

Steelhead love rocky waters. So, if the bottom is rocky, you might find fish. If there are boulders and large rocks in the water, your chances are even better, as the fish prefer to rest where they are protected, and large rocks provide great cover. You can cast right to a boulder, and you might find a steelie in hiding.

Another good area to fish is calmer areas just down from a rapidly moving stretch of water. The fish will be resting in the calm, preparing to continue through the rougher waters ahead.

Steelhead are a tough fish to catch. You can go years without getting one, even if you put in a good amount of time on the water. The most important thing is to try often, and persevere. If you find fish and you can’t get them to bite, change everything up in your approach. Just be sure to change one thing at a time, so you know what you can do in certain situations to make things work.

Excellent! Well written; and thanks for your knowledge and information