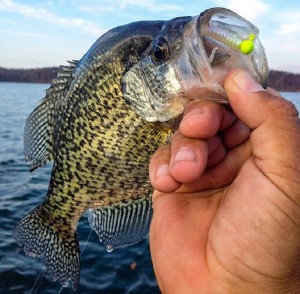 Crappie is one of the most common fish in North America. There are two types of crappie fish: white crappie (pomoxis annularis) and black crappie (pomoxis nigromaculatus). The two types are often mistaken for each other, but there are some distinguishing differences between them. The black crappie is a deeper silver-green color and has irregular black splotches. The sides of the white crappie have dark vertical bars going down their sides. Both types of crappie fish have spines along their dorsal fins and gill covers.

Because of their pure, white, flaky flesh, crappie fish are known as one of the best-tasting fish. Besides their taste, crappie fish are one of the most popular fish to catch, due to the fight they may put up. Crappie fish may also be referred to as Specks, White Perch, Sac-a-lait, Croppie, Papermouth, or Slabs.

Where to Look for Crappie 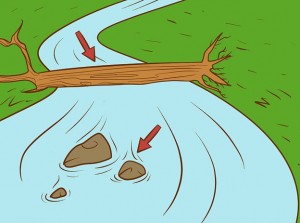 The best tips for catching crappie fish involve location and timing. As was already stated, crappie fish usually feed at dusk and dawn, so those are the best times of day to fish for them. Crappie fish will also come to lights at night to feed on the smaller fish attracted to light.

Fishing in an area with underwater debris and structure is more likely to have a successful outcome than fishing in a clean area. Even a pier or dock can become a haven for crappie fish. When fishing in oxbows, look near old river channels are the basin of the lake for a good spot. In reservoirs, crappie fish may concentrate in deep timber near channel breaks. Crappie fish in rivers tend to take up locations in deep backwaters. When all else fails, use a sonar fishfinder to locate them.

The best time of year for catching crappie is spawning season, which is spring and early summer. During this time, spawning crappie will be easy to find in nests and shallow water.

Also, look for birds feeding. Birds feed on the same fish that crappie feed on, so if you see a large number of birds feeding, that might be a good spot to try.

Finding the right depth makes all the difference, too. Start low, and if no fish bite, let the bait go up one foot, then another foot, until you have hits.

Tricks with Lures and Bait 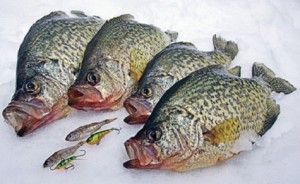 In addition, you can experiment with lures and bait to attract crappie. Smaller jigs are the best lures to use when fishing for crappie. A 1/8 ounce jig seems to be the most effective.

Make sure you’re using the right fishing knot. Use a loop knot with the jig, and that allows the jig to move more freely when casted. The most popular crappie rig is a small tube or grub jig below a slip bobber.

When using live bait, make sure you use the proper size hook. Too small, and the fish will slip right off the hook. Too large, and the fish won’t be able to bite. Don’t set the hook too hard, as crappie fish have thin mouths. A preferred bait rig for crappie is to use a #6 hook, a small split shot, a live minnow, and a slip bobber. Larger bait can be used for crappie fish in the fall. If the bait isn’t working, change it.

Crappie fish are notoriously picky about lures and bait, even to the point of sometimes having a color preference of lures. It’s not legal in all states, but some states allow chumming, which means throwing bait into the water to encourage fish to surface. Be sure to check with state laws before doing that.

Perhaps most importantly, be patient. If the fish are not biting in one area, move on. However, it might be beneficial to stay in a location if a crappie has already been caught. Crappie fish are very social and usually live in large schools. Where there’s one fish, there are more.

Rod and Reel, or Pole? 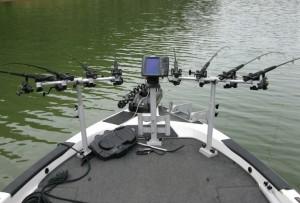 You don’t have to have a specific kind of rod and reel to catch crappie. Nearly any combination of rod and reel, or even a pole, can be used. Let the depth of the water dictate the kind you use. When crappie fish are in deep water, an ultralight spinning or spincast combo, spooled with a 4-10 pound line, is often the best choice.

Using a pole is most appropriate in shallow water. Be sure to fish at the ideal depth. Crappie fish can often be found between three and six feet of water. Since depth is important, a topographical map or depth-finder may be helpful to pinpoint the likely locations of crappie. You can even use a fish finder.

Dipping the Cover, Casting and Retrieving, and Bobber Fishing

Need more specific tips? Try what’s known as dipping the cover. Check the water closest to the bank. Crappie fish can spawn in as little as 8 inches of water, and depending on the area, they may be very close to dry land. Trees and bushes along the bank can be great locations for crappie. Casting and retrieving is another technique.

Again, crappie fish are notoriously picky, so some will bite on a motionless hook, while others prefer a little movement. Bobber fishing is yet another technique that might be helpful. Using live minnow beneath the float is a tried-and-true method for catching crappie. If you’re determined to outsmart the crappie, try spider-rigging. This involves using eight, ten or even twelve rods, all rigged with different colors and set at different depths. Using spider-rigging, you can cover a span of 30 feet of water at once.

All You Need to Know

Hopefully these tips have been helpful. Catching crappie fish doesn’t require too much special knowledge, just some time, patience, and a little luck to find a good fishing area. Perhaps the best thing is that you once you’ve caught a few crappie, you can still continue to fish the same area. Since they travel in large schools, chances are good that if you catch one crappie, you’ll be able to catch more.