Down Imaging vs Side Imaging Sonar

When it comes to fish finding sonar, your choices have exploded in recent years with advancements by leaps and bounds. In this article we will be quickly looking at two important sonar types used in today’s new fish finders: Down imaging sonar and side imaging sonar. These two innovations have been much praised in recent releases; so, in this article we will give you a quick introduction to what each one is, and which one is better.

Both of these sonar types use frequencies that are much higher than standard sonar to achieve a much greater level of detail. The thin beam of sonar also has greater range than the cone of traditional sonar.

Down imaging sonar uses high frequency, thin sonar waves to produce an incredibly detailed “picture” of what is beneath your vessel. The high frequency waves are what enable you to have a snapshot of what’s beneath you in unreal detail.

Side imaging sonar operates in a similar manner, except out to the side of your vessel. Some units give you the option of using several different beams of different frequencies that go out farther than the last beam from your vessel, giving you the maximum range and a veritable sonar “net” around your vessel.

It’s worth noting that these sonar types come under a variety of names: DownVU, SideScan, SI DV, etc.

Advantages of Down Imaging 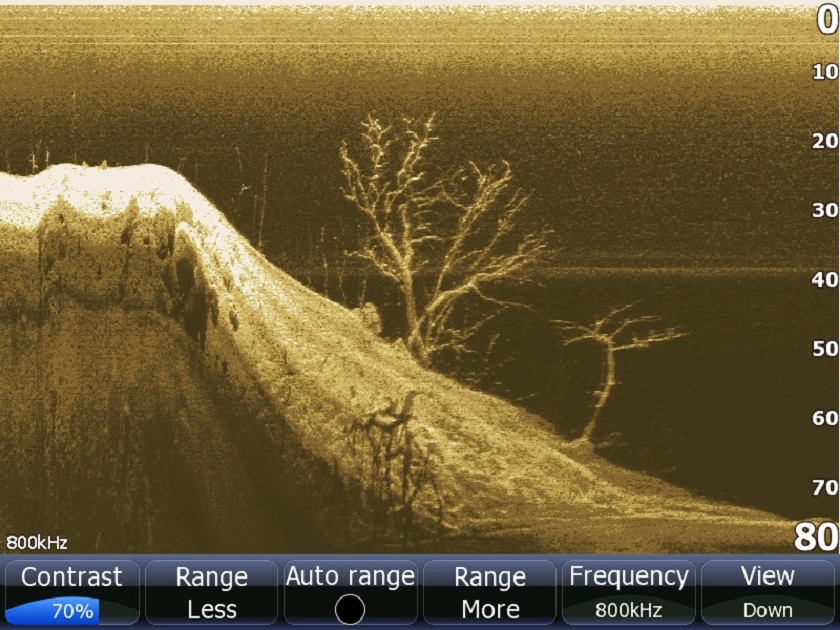 Down imaging gives you an incredibly detailed view what is beneath your vessel. This can come in handy monitoring bait schools in deep water, your jig, or scanning debris and hides beneath the water to determine potential hot spots. For bait fishermen in deeper water, this can be a real game changer. For stationary fishing when you need to monitor a bait jig beneath you, this will give you a real leg up. And with this high level of detail, the uses for this sonar could go far beyond fishing to include hunting for submerged objects.

Some units give you the ability to use down imaging and a chart simultaneously to pinpoint what you’re seeing precisely on a map.

Advantages of Side Imaging 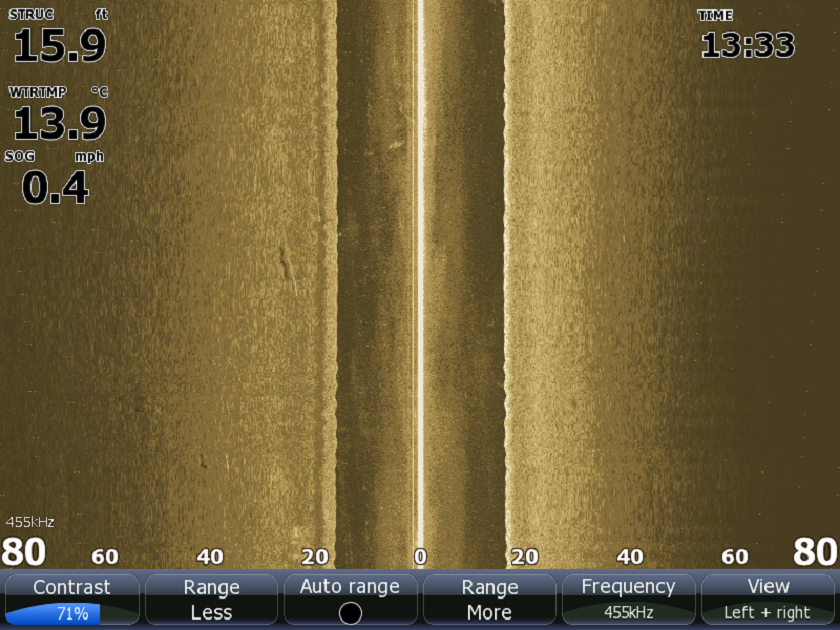 Side imaging is purpose built for trolling fishermen. When you’re cruising forward, being able to see out to the side of your vessel will enable you to see schools in great detail as you pass them. And with side long range side imaging casting off both sides of your vessel, nothing will escape you.

Depending on what unit you choose, side imaging is usually highly customizable: different filtering options, wide palette choices, zoom, contours, and more take your viewing and fishing to a whole new level.

When it really comes down to it, you really can’t say either of these sonar types is better than the other; the decision is application oriented. What you need from your fish finder is going to decide which type of sonar is what you need.

Side imaging is going to be more useful in shallower water or when you are scanning for shallow diving fish, whereas down imaging sonar is going to serve the deeper fisherman who are fishing vertically better.

Side imaging generally may have a larger proportional range than down imaging sonar, while down imaging obviously wins as far as depth range.

What is really helpful is that many manufacturers have released models that have both side and down imaging sonar, so you don’t have to make a choice between two separate units. Some units even allow you to use both types simultaneously and view them both simultaneously for the best of both worlds.

So, the choice of sonar type comes down to what application you need a fishfinder for. Shop around. There is a lot available to you.